Alternate title: Good riddance to this past week!

As you might have read in the previous post the beginning of last week found us all fighting off a cold. While the day after Valentine's showed some improvement for Keith and I, Charlie wasn't quite as lucky. By late that afternoon his nasty cough had quickly worsened and he was struggling to breathe. Even when resting he sounded like he was gasping at the end of a race.

We were off to the hospital. 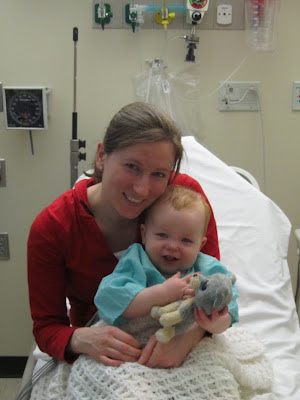 Charlie was quickly diagnosed with croup and got a breathing treatment and oral steroid which quickly opened his airways and calmed down his breathing. At that point we all took a sigh of relief and took a picture of Charlie with his toddler sized hospital gown (and Puppy who almost never left his side). 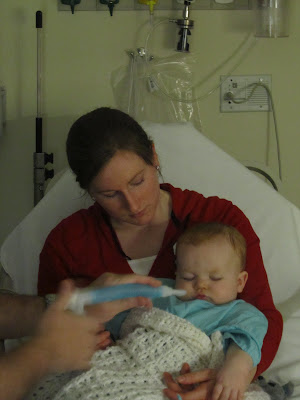 For a moment I was thinking we were going to be home free soon, but then Charlie's breathing went rapidly down hill and he needed another breathing treatment. About half way through that he could breathe well enough to fall asleep for the first time in a LONG time. Sigh. 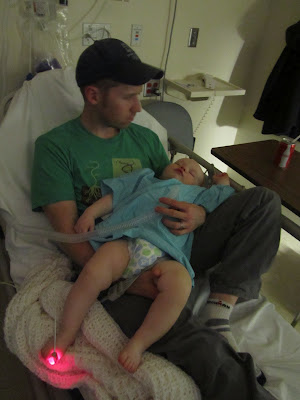 He was exhausted. (Side note: he was fascinated with the red light they put on his foot to measure his blood oxygen levels. I need to get one of those for church.) 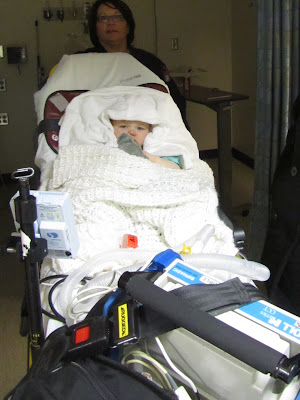 Because it had taken more than one breathing treatment to get the croup under control and because he still wasn't out of the woods, the decision was made to transport him to another hospital where he could be admitted (lesson learned: make sure you go to the hospital with the pediatric unit next time). We wrapped him up in his big blessing blanket from Granny B and towels for the chilly ride out to the ambulance. Puppy was in hand and Charlie didn't make a peep the entire trip. 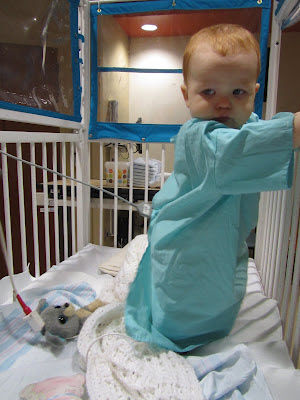 An incredibly sleep-deprived Charlie inspecting his crib at the second hospital.
We all stayed at the hospital until the next afternoon when he was released with a warning to keep a close eye on his breathing. Through the next couple of days his breathing steadily improved and we thought we were moving on.

However the weekend had different plans in mind. Saturday consisted of a nauseous Charlie snuggling with me and Keith cleaning up several messes (it is hard to get a nauseous toddler to aim for the trash can or to even predict when the trash can will be needed). Sunday consisted of worrying that Charlie wasn't eating anything and wondering what that meant for his phe levels (thank goodness that we have PKU friends to calm our fears). Monday consisted of a nauseous Katie, an ear ache for Charlie (who still wouldn't eat), and a stressed and worried Keith. We are so thankful for priesthood blessings and the peace, healing, and comfort they bring! 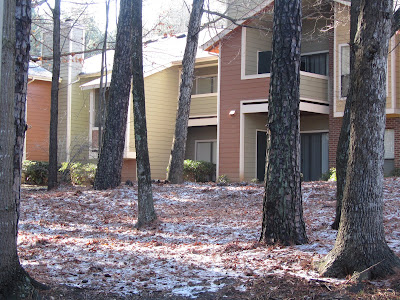 Sunday night also saw our first NC snow this year (though their wasn't much to it).

I got Charlie into a chiropractor on Monday and by the time we got into the pediatrician this morning his ear ache is all but gone though he does have a sinus infection and his croup is still lurking around which he was given another oral steroid for. However, I think it is safe to say we are on the up-and-up (knock on wood) and will all be right as rain soon. Charlie is getting his energy and appetite back this afternoon (a big improvement from his scant liquid diet of the last few days) and I actually felt up to tidying up the living room this evening and am looking forward to getting back to our lake walks tomorrow.

It is rather suspicious that what has been by far his worst illness ever and first ear and sinus infection hit barely 2 weeks after introducing a bit of cow's milk to his PKU formula to up his phe without introducing high protein foods. We are swapping it out with soy milk for a couple of weeks and then will try cow's milk again watching closely for any allergy symptoms. Paying a little extra for soy milk would be a small price to prevent a repeat of last week!

We are so thankful for preisthood blessings and the peace, healing, and comfort they bring!
Posted by Katie at 5:12 PM

So glad things are getting better! What an adventure...that I'm glad is finishing.

Sorry to hear you guys had such a tough week! Croup is no fun. Maya gets it often but not bad enough for hospital visits so I can sympathize to a small degree. We'll pray for you guys!

OK, I'm only going to say this once: OUR KIDS NEED TO STAY OUT OF THE HOSPITAL!

It's just too hard to handle. Little Charlie is simply adorable in his gown, however. I'm so glad he's doing better - I was very sad to see that you guys had to go through this. Love to you.

oh so sorry. I laughed when you said babies can't aim for a bucket. So true. Loved the pictures though, so cute wrapped all up!

what an emotional.roller.coaster! so glad you are all.feeling.much better. note on soy milk.... make.sure if you buy the refrigerated soy milk it actually says dairy free... not just lactose free. most chilled soy milk still.contains.dairy protien but the shelf stable (chill at home) will.be.dairy free.for.sure. we'll keep.our fingers.crossed.and.pray for no.allergies!!!!