Half the Sky: A Book Review 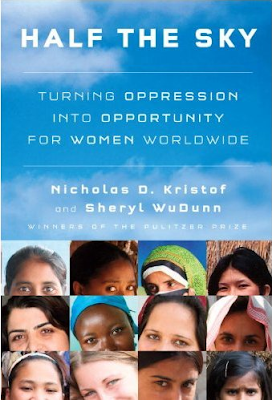 I don't normally do book reviews on my blog but this last month I have read two books that resonated so loudly with me that I just have to share them with you. The first one was Half the Sky. I have heard about this book several times over the last few years but never got around to reading it. Honestly I was a little be afraid about reading an entire book about a topic as grim and heartbreaking as the injustices against women around the world.

I should have read this earlier.

This book tackles the widespread issues of sex slavery, mass rape as a weapon of war, maternal mortality, genital mutilation, and other topics that are so horrifying that we would rather just not think about them. However, it does not just describe the terrible situations and leave you feeling depressed and disgusted. As it addresses each issue the book also talks about improvements that are being made in each area. It talks about what strategies are working, and what doesn't, what hinders success in these efforts, and what helps. Rather than finishing this book with a sense of hopelessness, I finished uplifted and with a feeling of empowerment. I also left feeling like I could do more.

Read it. Just read it. You won't regret it at all. I am amazed at what educating and empowering women can do to decrease poverty and increase the health of nations.

Interesting fact: As states in the U.S. began granting women the right to vote the infant mortality rate dramatically decreased and the literacy rate dramatically increased in each of those states in the years immediately following. The reason? Politicians realized that they now had to pay attention to "women's issues" so they devoted more resources to these two areas.

What is my point? I will answer that with a quote from the book:

"The unfortunate reality is that women's issues are marginalized, and in any case sex trafficking and mass rape should no more be seen as women's issues than slavery was a black issue or the Holocaust was a Jewish issue. These are all humanitarian concerns, transcending any one race, gender, or creed."

We all benefit when women are granted education and true freedom.
Posted by Katie at 9:57 AM

One of the most powerful books I've ever read. It really moves you to action. This year as part of a new Christmas tradition, we donated some money to the Fistula Foundation and it was easily our favorite gift this season.

Way to go reading it and sharing it. Truly, these things need our attention.