Warning: This is a long post! I didn't want to leave it totally without pictures so I have included the following comic. I relate to it a little too well. 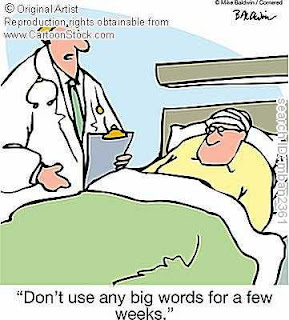 I think I am starting to get over the shock of T-Day (Tumor Day, as we now refer to Monday, April 22). God has put some miracles and tender mercies in our path that let us know that we are loved, that I am loved, that He knew about this all along, and that I am going to be alright. I have long heard the advice to look for evidence of God's love for you each day. It would be a flat out lie if I said that I haven't had some pretty dark and depressing moments these past few weeks, but each day I haven't even had to search for evidence that God loves me; it has just been right there. It has come in many forms such as a friend calling and taking me to get my first pedicure right after an embarrassing seizure at Costco, or an uplifting text from a family member when I needed it most, or simply Charlie making doing something funny enough to make me laugh when I needed it most.

The biggest one would have to be the miracle of my neurosurgeon. Duke University, home of a pretty good basketball team as well as the world's leaders in neurosurgery, is just twenty-five minutes away from us. However the brain tumor center at Duke has a screening process that takes 4-6 months to get through. Keith and I knew that we wanted to get into that center and so we buckled down for the long process. In the mean time, a week after being released from the hospital, I had a follow-up appointment with the neurologist, Dr. Bowman, who happened to be on-call the night the ambulance brought me in. During the follow-up appointment we brought up the topic of the Duke brain tumor center and requested a referral so that we could start the screening process. The doctor's response took us both by surprise. He explained that when he saw me in the hospital he knew I needed to be at Duke so he called the director of the brain tumor center, Dr. Friedman (who just so happens to be his good friend). Dr. Friedman said that he could meet us as soon as it was convenient for us. Dr. Bowman said he had just wanted to clear it with us before he set anything up. We enthusiastically gave our consent and he left the exam room to give Dr. Friedman a call. A few minutes later he came back a told us that if we could leave right then, Dr. Friedman would wait for us and see us right away.

On our drive to Duke that day Keith and I went back and forth between being amazed that this all had come about so easily and quickly, and expressing how weird it is that we were that happy to be going to see a neurosurgeon! Things had fallen in place so quickly that when we arrived at the brain tumor center none of staff were expecting us and had thought that Dr. Friedman had gone home early. Eventually they tracked him down and learned that he indeed was expecting our arrival, though he was the only one.

We met with him and his PA in his office, (which is everything you would imagine a brain surgeon's office to look like) and together we talked about the details of my situation, my options, and came up with a plan. It was also the first time that either Keith or I had seen the MRI images of the tumor. Shocking and scary are the terms that come first to mind but they seem rather mild ways to describe what we were feeling. It was HUGE and it was in MY BRAIN!!! The rest of the visit and stuff that was discussed had some scary parts too. The thing that kept me from panic was this little voice that would occasionally remind me of events long in the past that had led us here. Those forks in the road of life that suddenly held so much more meaning. It kept reassuring me that we were not there having this meeting be accident and that it would all be okay.

So the plan in brief is to remove as much of the brain tumor about a month after our little one is born. The more they can remove the better my long-term outcome looks. In order to remove as much as possible without removing brain tissue (which would be bad) I need to be awake for a portion of the operation so the surgeon can "map" my brain and more clearly tell what is brain and what is tumor. Freaky? Most definitely. But I am hoping the experience will one day make for a good blog post.

Dr. Friedman emphasized that the recovery process would not be a walk in the park. Keith brought up later that it sounds more like my dad's version of a walk in the park (i.e. Rainier, Denali, etc). I will won't be able to speak and will be paralyzed on my right side for a few days. It will be several weeks before I am fully functional again. Oh, and did I mention that we will have a two-year old and a two-month old at this time? Daunting? Yes. But I am thankful for the time that we have to prepare and the family we have that are so willing to help.

In the meantime we are focusing on getting these persistent seizures under control (which is turning out to be more complicated than we thought) and growing a healthy baby.

It has been humbling and encouraging to hear that so many people are praying for me and my little family. Thank you so much!
Posted by Katie at 9:31 PM

What a faithful attitude. And rightfully so. Don't beat yourself up if some days you feel crusty. You'd have excuse to be even if you were just preggers. Do you guys have names already? You are amazing, and your hubby is amazing too. This crazy detour in your lives has a purpose. I'm confident of it. I love you guys!

Did the brain surgeon look like this guy? http://www.youtube.com/watch?v=THNPmhBl-8I

Thanks for the update, Katie! I've been thinking about you a lot lately, and we pray for you and your family daily.

I'm so glad to hear of your miracle - that you have a wonderful dr. on your side. and a plan! I always feel better when I have a plan, even if it's a scary one.

We've been thinking about and praying for you guys. I wish I had amazing wisdom for you guys, but you guys are already so awesome and amazing, I know you can do this!! We love you!

Katie, You amaze me. I JUST heard about your story from my Mom. I couldn't believe it, I am humbled by your reaction and I am praying for you. Your name is in the Las Vegas Temple! I know we haven't talked for years but growing up you were some one I KNEW had a testimony and would NEVER stray and boy are you proving me right. Keep the faith because you are strengthening mine!

Katie, I don't know if you remember me, I am Deb Black's mom but I have been following your posts and just want you to know you are amazing. I pray for you and your little family and that all will be well. Here is praying that those miracles will continue!

I am amazed at your faith and strength through all of this and pray for you all the time. My husband and I too were led to a different part of the country to be able to have a family and even though it isn't the same, I believe that you have been led in your paths to the doctors that will be able to help you. You are amazing. I don't even know you that well, but I think you should know that. With love,
Janeen Syme

Thanks for the update, Katie. It is amazing to hear about the miracles you have seen so far. This has got to be such a scary experience for you, but it is good to watch for the positive too. I remember when my mom was diagnosed with cancer how scary it was, but at the same time we all felt that the Lord was taking care of us. We felt the presence of angels around us often. Your family is in our prayers.

Oh my! Thank you for writing about this and being so strong, at least outwardly. It is uplifting! You will be in my prayers, and prayers of my friends that I will tell about you! I wish you (especially) and your family the best.

I am so excited for you to have a boy and a girl...the best of both worlds. I have one with PKU and one without, and our friends the Austermans have two kids both with PKU. Whatever the outcome for your new baby girl, you have some support from strangers too! :)