Back in Puerto Madryn

So I spent a half hour yesterday typing up a nice little summary of the Andes trip. It was fun to read, not too long, humerous, thought provoking; in short it might just have been the next great American novel. But alas I saved it to my laptop, not my jumpdrive, so my masterpiece is a long walk away and I will be gone for the mext two weeks. Here are some pictures instead (I know that is all you guys really want to see anyways). Enjoy!

We took a boat to the Arrayan forest. Everyone we have mentioned this to got very excited. Argentines are very proud about the Arrayan trees as they only grow on this island. It was pretty neat. 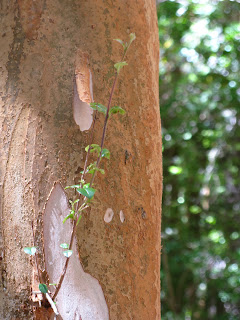 Our boat to Isla Victoria and the Arrayan forest outside of Bariloche. 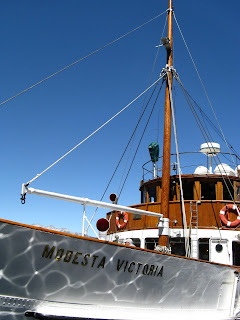 Ummm, I was in the Argentinean Andes... 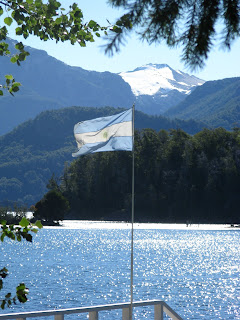 At the Chilean border outside of El Bolson. We camped one night in the Lago Puelo National Park outside of El Bolson and took a boat and a short walk to the border. We met some really neat and nice people on this trip including 5 young men who spent last winter working in Stevens Pass (in Washington) and the speedboat operator and tour guide, Fernando, who didn´t speak much English but knew all about the plants, geology, and wildlife of the area. He was intent on making sure we understood everything he told us about it. At one point he explained to me that in school he didn´t like learning English, he would rather learn about wildlife and plants.¨ "Yo tambien" I told him. Boy howdy do I ever understand that. 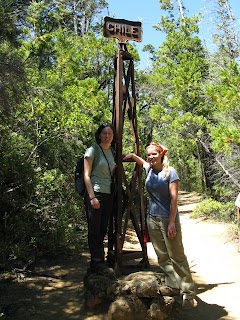 A carving in El Bosque Tallado (the carved forest). It is a small area in the hills around El Bolson where there was a fire ten years ago. After that some woodcarvers came in over the years and carved on the dead trees. There are now about 40 carvings. Really neat. 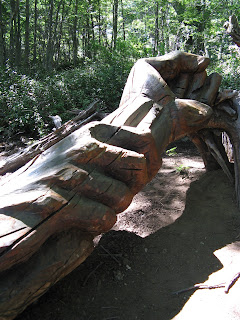 Yet another town, and another long search for a campsite. Trekking through Esquel. 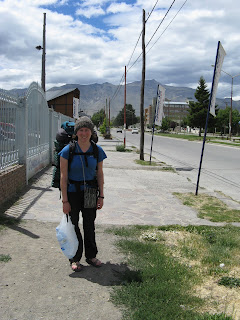 A prize winning ram at the Merino Ram auction in Esquel. 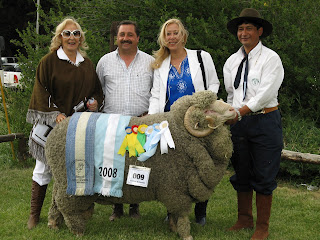 An older man in the park in Esquel. The old men here dress more traditionally, and are very nice. I leave Monday for Gan Gan. Basically the "nada de nada" of Patagonia. It is a booming metropolis with less than 100 residents, and one police officer who apparently knows the CENPAT group well due to a sheep incident last year. I don´t know all the details on that one. We will be conducting ecological and behavioral studies on the lizards there. I will take lots of pictures and write you all in 2 weeks. Until then, take care and I love you all!

question for you....in the photo of you next to the sign for Chile....are you going granola? Please, no Katie!

Ummm, no, Whitney. No. I try to avoid that when there are camaras around...

We do LOVE the pictures! Is that a dog on the hippie man's head? Wow the Andes are amazing - and so are you. :)

Yep. Shortly after this photo he had all four paws on his head. But sadly I did not get a shot of that one. I love you!!!