A Week of Unexpected Fun

The people in the lab here are frequently inviting us to come over to their house for some sort of Argentine food, or taking us places, or at least finding out all the logistics about a place we mentioned we wanted to see. All of this means that we are having great opportunities to see and do neat things with very little effort on our part. It also means that whenever I think that there is just a normal week of lab work ahead of me, I am sure to be wrong, just as I was this week.
Last Thursday Lorena (a lady in the lab) invited Sarah and I to go with her and her boyfriend, Nahuel, to a carnival in Dolavon, a town south of here. Little did we know that the carnival was just a part of the trip. They picked us up from our apartment at 4pm and we hit the road for Trelew all crammed in Nahuel’s little old VW and drinking mate. Our first stop was the paleological museum in Trelew. There are quite a few dinosaur fossils that are solely unique to Patagonia and this museum also has a working paleo lab that frequently houses international researchers. Sarah and I were very impressed by enormous real fossil snail. Caviar anyone? 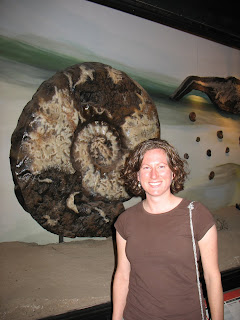 After the museum we headed west towards Dolavon, but made another stop in Gaiman along the way. This town was founded by Welsh immigrants whose culture (and tea houses) are still prominent there now. One tea house in particular has become a popular tourist destination after Princess Diana of Wales had tea here about ten years ago. It is a quant little Welsh styled house surrounded by perfectly manicured English gardens. The entrance of the house has a large photo of “Lady D,” as she is affectionately referred to here, surrounded by flowers. Old ladies in pink aprons brought the tea, and hot chocolate for Sarah and I (the best I have ever tasted), and platefuls of buttered breads and small cakes of every variety (all wonderfully delicious). I had no idea that so much could be eaten with such dainty silverware. 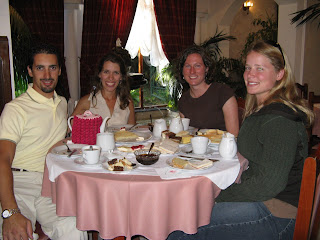 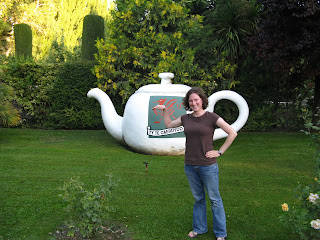 On our way out of town we stopped at several small farms to buy cheap, and very good, fruit and corn. It was neat to chat with the different farmers (as much as I could) they were very nice, and surprised that we were all they way from the U.S. Gaiman is one of the loveliest towns I have been to, ever. The sun was setting behind a row of willows on a river bank as we headed back to the highway. I started to have thoughts of living in a vine covered brick house surrounded by fields of fruit, making peach marmalade, and spending summer afternoons taking siestas under a low willow.
The carnival in Dolavan started at 11pm and went until 1am. It was part small town parade and part Halloween. There were a couple blocks of road blocked off and the carnival went up one lane and down the other in a circle for two hours (over and over again) as the crowd of people watched from the side. The majority of the carnival was groups that were half men and boys in bright outfits banging all sorts of drums as women and girls (the other half of the group) danced to the rhythm in equally bright clothes. Infrequently dispersed in between were some small floats pulled by tractors and a larger than life clown on a forklift. I was amazed at how the carnival performers could keep up their intense energy for two whole hours in the middle of the night. But this is Argentina, so I shouldn’t have been. After a long drive home to Puerto Madryn we crawled tired, and happy, into our beds at 2:30am. 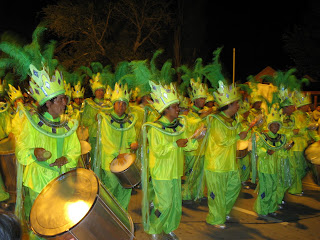 Yesterday, another unexpected experience came our way. Natalia got a call from a friend that works in a ecological conservation center in the center of town. Two months ago there had been an oil spill along the coast south of here and several birds and mammals had been saved, cleaned, and nursed back to health. These included Magellan penguins that now, after two months of intense rehabilitation, were ready to be returned to the ocean. They were staying in a small yard behind the conservation office for a few days before their release and Natalia’s friend had called to see if the “gringas” wanted to come and see. Well of course we did! They were tiny and unbelievably cute as they swam around in their little wadding pool and waddled around in their pen. Some of the sick ones were kept separate in metal cages. There was something about the shuffle of their little feet and the way they shook their entire bodies with their flippers stretched out that made me want to squeal like a little kid on Christmas. I am excited for them to go back home. 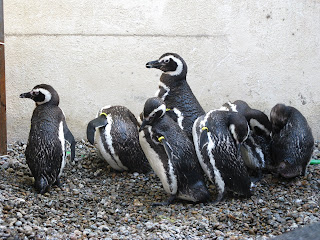 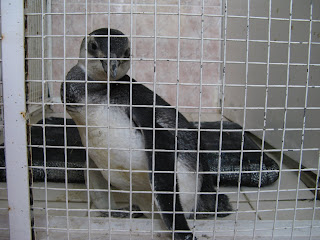 Just in case you were doubtful, here is proof that we do spend time working in the lab. This is me extracting tissue samples. 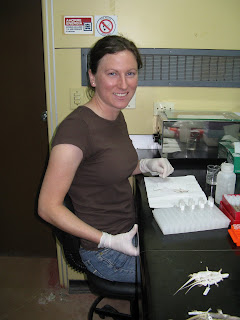 Here is Sarah on sorting duty with a piles of dead lizards in jars. 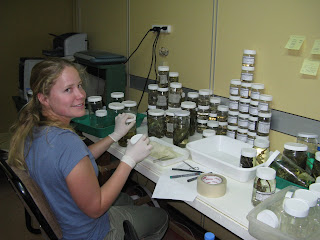 hooray for adorable little penguins! They are so cute! It sounds like a wonderful, beautiful place. I miss you dear Katie! Have a wonderful day!

I love penguins and I'm so jealous that you got to meet some in real life!

#1. I love you!
#2. I love your haircut! Did that happen a while ago and I just didn't realize until now?
#3. Yay for penguins! I'm excited you got to see them!
#4. I miss you. What are your plans for when you get back? aka housing contracts, when you'll be back in Provo...I know it's a ways away, but I was just curious.