I spent Saturday among thousands of Magellin Penguins at Punto Tombo and what a blissful and delightful day it was! The penguins spend most of the year here where they have built millions of nests in the ground up to a kilometer inland from the shore. It is the largest penguin colony outside of Antarctica and I was on cloud nine all day. 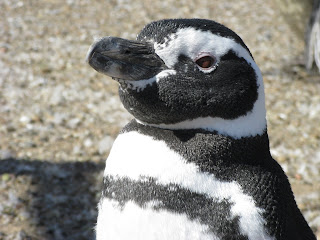 After walking through thte nests we arrived at a rocky point where I sat for hours and watched the penguins below. They are incredibly awkward looking as they sway back and forth on their walk to the water. They almost seem as if they are going to trip over their oversized feet. These big curling waves would come speeding towards the shore and these tiny waddling critters would just keep on going towards them. Just as the wave would start to curl over their heads and I would think that the penguin was doomed, it would torpido itself into the wave and transform itself into a graceful animal that could speed and twirl itself throught he water with ease. The green water was very clear so from my viewpoint I could watch them fishing under the water. It was surreal. 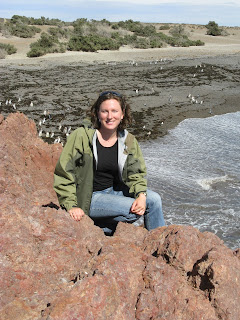 Here is one of the nests . The males come here about 30 days before the females to work on the nests and guard them. During this time the males don't eat at all as they can't leave the nests without another penguin taking it over. These penguins are monogomous for life with one hitch. The female returns to the same male from the previous year but if she finds the nest to be below expectations, then she goes and finds a different male. 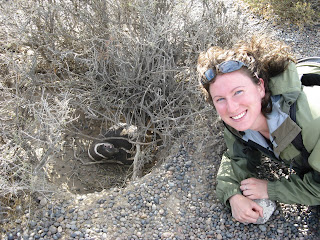 Groups of penguins stood along the shore for miles in each direction. I was pinching myself all day. 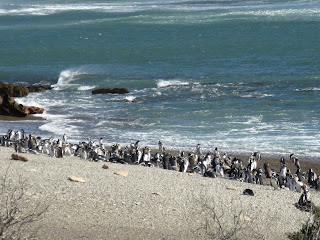 The penguins were incredibly cute when they would turn their heads like this, and I just wanted to stuff one in my bag and take it home with me. In reality, they turn their heads to better judge the distance between you and them. It they decide that you are close enough then they will bite at you. Their curved beaks can easily take off a finger. There were so many penguins that it was hard to watch out for all of them. I didn't see one standing behind a bush and when I walked by it bit my pants. It gave me a good startle, but my leg is still intact. As driver told us on the way down, "penguins funny, not friendly. 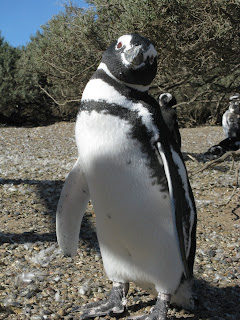 The previous post is a video of one of the groups near the shore. If you listen through the wind, which was incredibly strong all day, you can hear the penguins. Animals facinate me on a regular basis, but watching these penguins was really an incredible experince, too difficult to discribe.

Ahhh! I've been waiting for this for two and a half months! Those penguins are adorable - especially the one that's supposedly judging if I'm close enough to bite. What a dear! Glad you're enjoying the local wildlife and that I can enjoy it vicariously.

AMAZING! love checking your blog out every once in awhile.

i hear your fam may be climbing rainier this summer! i told your mom that my hubby and i DEFINITELY want to join you if that's the case, so keep us in mind!!!

I'm so jealous and so happy for you!!

Hey Katie it is Lomax here. WOW I am so jealous and so excited for you. I shared the latest pics with Alex's class. The kids love the penguins. I look forward to your postings so thank you so much for sharing your adventure!

Katie, so much good news!

I got your letter and I promptly started wearing my earrings because I LOVE them! Thank you so much. I cannot wait until you get home because we are going to have adventures galore.

Also, I finally got a bride to let me photograph her in the city. Check out the shoot on my blog to see Lisa's awesome bridals!

Thanks again for brightening my day and I can't wait to see you again so I can give you my gift!