Back in the Saddle

Spring has sprung and that means that the Shrub lab is hopping with work to be done. In just a week I have been up Spanish Fork Canyon, Santaquin Canyon, and out in the west desert. Lots of interesting stuff. In Spanish Fork Canyon we have a project going on that is a bit different than our others. There is a small purple flower called Phasilia, that only grows in two populations in Spanish Fork Canyon. You don't get much more endangered than that. We have been trying to re-establish it in other areas throughout the canyon and learn about its life history. We are just a few years into it, and these things take a while, but so far, so good.
This is one of them. They don't get their pretty purple flowers until later in the summer. 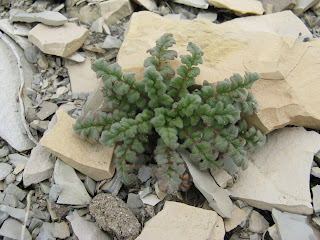 One of the things we were doing last week was collecting tissue samples (a few leaves) from some of the plants so we can run DNA tests and see how closely related they are between the two populations. This is important information to know because re-establishment will be trickier if they are all closely related. My boss, Susan Meyer, is in the middle of this photo. Bitsy, is to the left, and the other two are the genetics lab guys who do the DNA work. They came up so they could see the bigger picture of what they do in the lab. 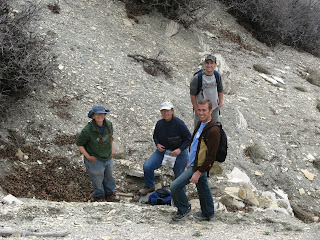 This was a neat find. A certain type of wasp (I don't remember the name) has some pretty incredible saliva that reacts with leaf tissue in a very advantageous way. When the wasp chews on the leaf, the leaf reacts by growing a sac where the wasp then lays it's eggs. Inside this sac are hundreds of baby wasps. That is like us chewing on a tree and having it grow a cradle. 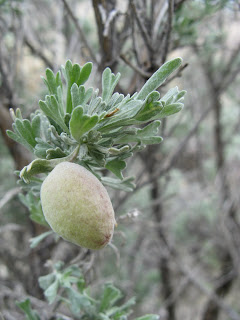