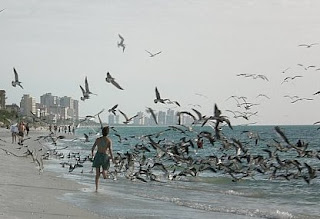 I will graduate in less than a year; which means that there has come again a time of decision making. Options and obligations soar around my head. They remind me of the seagulls that would take up refuge on my elementary school playground. I, along with the other kids, would chase them in exhausting enthusiasm. The birds flew erratically as we ran after one and then another, and then another. Stopping and turning after a new gull just as we got close to the one we were after. I never really knew what I would do with the gull if I ever did catch it. I was just happy to be on the chase. I have now come to the place where all that I have seen myself doing and being, and all that I will do and be meet and prove one another. As I chase my gulls I have had several thoughts; some not my own. Here are a few:
"Do that which you can do
The world will feel its need of you."
-Emerson
"Don't take too much council from your fears."
-Pres. Faust
"How many big events to shake the earth,
Lie packed in silence waiting for their birth."
-Emerson
"To think
that every brain is on the brink of nameless
bliss no brain can bear
unless there be no great surprise."
-Vladimir Nabokov
"A man's life should be as fresh as a river. It should be the same channel but a new water every instant."
-Gretel Ehrlich
"But yield who will to their separation,
My object in living is to unite
My avocation and my vocation..."
-Robert Frost
"...These things are showing me that I am capable of more than I thought."
-me, 1/17/08, in Argentina
Posted by Katie at 11:00 PM