Way back in May, way down south in Ushuaia, Argentina I needed a good, long book. I was facing an 18 hour bus ride, and 24 hours of alone time on a plane before I was back in Puyallup. So I wandered into a book store and found a small shelf with some English books. The selection was small, and I kept on going back to one fat classic: Moby Dick. 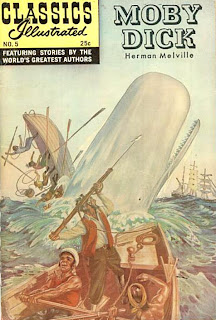 Perfect! I had spent the last four months living by the sea, it was a classic, it was long; what could be better? Oh, dear.

It is now near the end of November and I am only a bit over half way through.

Herman, my dear, what were you thinking!?! Yes, you have some beautiful prose in there. Some of your words just beg to be read aloud, over and over. But what is the deal with all the long chapters about why you think a whale is a fish, or how you get oil from whale fat, or all the theories on the origin of the word "whale." I am more interested in biology than most people out there and even I don't care to read an entire chapter on why the whale's forehead isn't really it's forehead.

Now for the reason I am posting about this. And, no, it is not to discourage any of you from reading Moby Dick. On the contrary, it is well worth it (just don't do it when you are in the mood for some light reading). But as my friend Megan would say, if you want something to happen, just put it out to the universe. Now usually she would prescribe this as a way to deal with "boy situations," but I think it will work for this as well. So here I am putting it out to the universe that I will finish the entire, long, saga of Moby Dick before Christmas break. That is, before December 20th.
Posted by Katie at 11:46 AM

I liked reading Moby Dick because it was like my Google Reader feed: different articles on all sorts of topics, all sort of mashed together into one long page. Thinking of each chapter as picking up a different short story or long article rather than as parts of a long book helped me ignore the constant challenges to continuity.

Go Katie! You can do it. I have never attempted Mobby Dick but War & Peace sure had its moments. Good luck!

You make me laugh! Love it. Just put it out to the universe.