We had a little Temus get-together (minus Sarah and Darren *sniff*) last week right before school began again. In a word it was joyous.

We spent all but one night at Jenny Lake. Lovely. It has been a long time since I have been car camping and it felt luxurious. Camping+flushing toilets=wow. 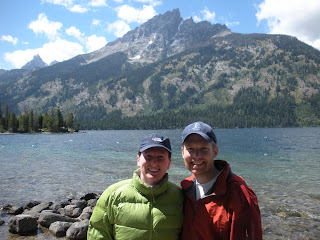 Tuesday we hiked up Garnet Canyon where we spent the night. Talk about a spectacular canyon! Everyone divided up my gear and left me with just a day pack. I was spoiled but not complaining! 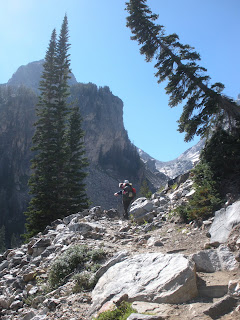 A marmot who joined us as we took a water break and enjoyed the view. 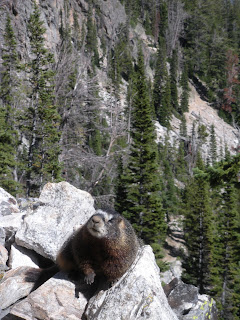 Keith with the Middle Teton in the background. This is the peak that the more fit feeling (i.e. not me) of us climbed early the next morning. 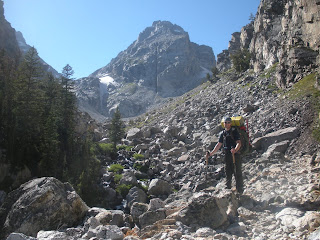 Water break amongst the boulders. 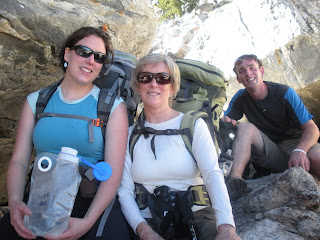 The Tetons are Mom and Dad's old stomping grounds. It is where a good portion of their courtship took place, especially on climbs from Garnet Canyon. We enjoyed a lot of trips down memory lane. The stories just get better as the years go on. 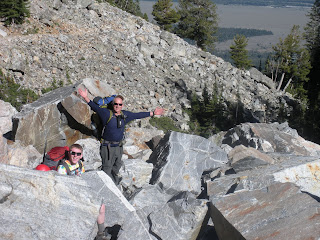 Camp. That is the Middle behind though we couldn't see the summit from this vantage point. 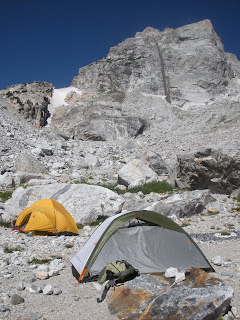 Wildflowers along the stream near camp. Mom and I spent Wednesday (before the climbers returned and we hiked out) doing yoga and watching climbers on various peaks and routes through the binoculars. Watching all the fun routes from a distance made my feet itch for a climb. I predict several return trips to the Tetons in my future where I get more rock time. 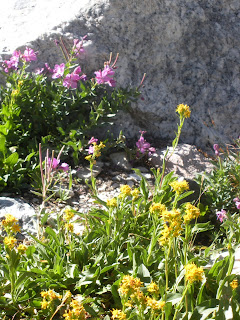 Back in the valley the brothers found a rock to jump off. Dad and Liz also braved the cold water. Wading was as cold as I wanted to go. 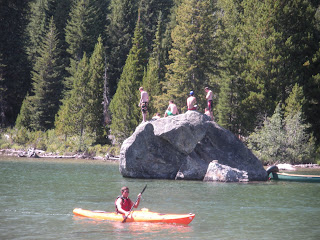 Thursday we took the boat across Jenny Lake to Cascade Canyon to find some rock to climb, and oh was there rock! Gorgeous granite! So great for the climbing. Dad and Mom took some time to review lesson on placing protection and at that pint my camera battery died. So there are no pics of the actual climbing. As a side note: climbing while pregnant is interesting. My balance is a bit off and I am still trying to get a sense of where my new center of gravity is. My new yoga tapes should help... 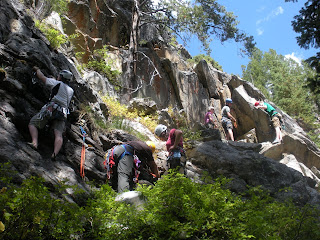 School was beckoning so we reluctantly had to leave. On the way back to Utah Liz and Joe met up with some of Joe's Rexburg pals and kayaked a bit of the Snake River.

Two of Joe's friends enter to the right of the picture and Joe (small red helmet, kayak under water) enters the bigger wave on the left... 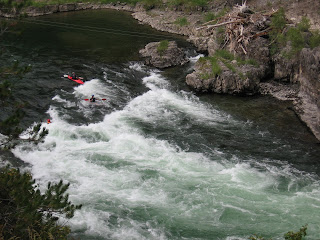 The bottom of Joe's kayak (green). It adds to the spectator excitement level when someone takes a swim. 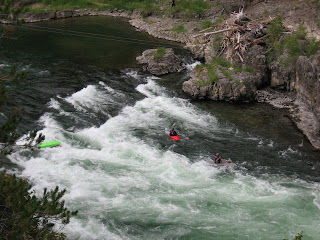 The bottom of Liz's kayak. 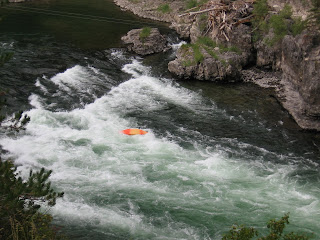 She added to the excitement some more by flipping back over (far right). 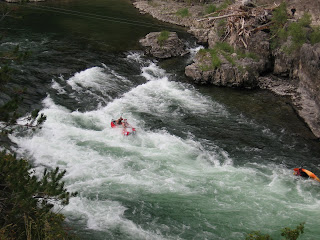 Katie - I'm bummed I didn't get to see you guys while you were here!!! I was up on the Lower Saddle for a few days on patrol, then by the time I got back I think it was your last day here. Dang. Looks like you guys had a blast though. Glad you at least ran into Angela. Let me know when you head back this way!

I love your posts about hikes and climbs and fishing trips, because they remind me of all the hiking our family did when we lived in Wyoming. It motivates me to spend more time outdoors!

I'm so amazed. Do you know what I was doing when I was 19 weeks along? I was not walking around the mall because it made my feet sore. You're amazing! What beautiful pics. too! Yay for you guys doing amazingly beautiful and enjoyable things!