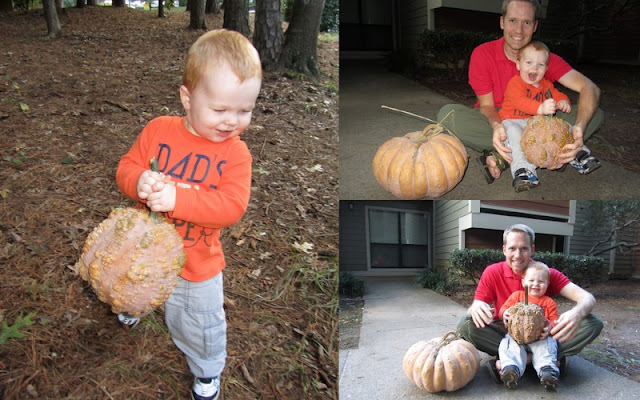 Keith's adviser and her family have a big pumpkin patch and back in September they invited us over to pick out a couple. When we got there they had picked them all and gathered them together. There were ones of all sizes and shades of green and orange. There were also every texture of pumpkin from smooth to the bumpiest pumpkins I have ever seen. So due to the variety and Charlie's thorough nature, it took a while for him to pick one. He touched them all, picked up a few, and eventually decided on one that was sufficiently bumpy and just barely light enough for him to carry without assistance (he absolutely did not want help with this process!).  Keith and I picked out a really big heavy one that his adviser recommended for baking purposes (I had plans for these pumpkins!). I really wish I had gotten pictures of that whole pumpkin picking process, but I was having too much fun watching Charlie. 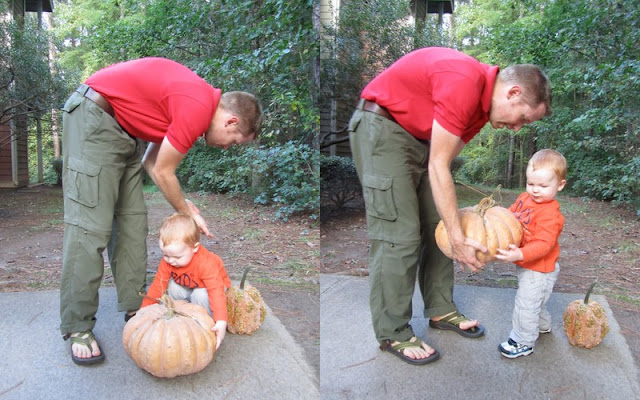 So a couple days later I had Keith and Charlie take their pumpkins outside for pictures. Keith thought it was silly but went along with it, and Charlie was delighted at any chance to carry his pumpkin around. After the pictures though Charlie had decided that his pumpkin just wasn't big enough so he put great effort into trying to carry Keith's. Finally he realized that he just couldn't do it solo so he settled for helping Keith carry it back inside. 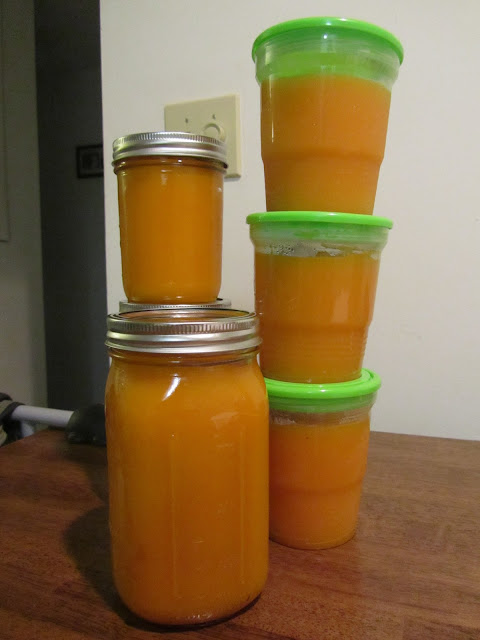 Over the next month those pumpkins were put to good use! This is just some of the puree I got out of those two pumpkins. Isn't that vibrant orange so pretty! It has been super tasty too! It was my first time making pumpkin puree and in case you are wondering, I used these directions: pumpkin puree. We still have pumpkin puree in the freezer, but here is what we have made over the past two months:

Toasted Pumpkin Seeds (one burned batch and one that was perfection)
Pumpkin Pie (of course)
Pumpkin Butter (dare I say that I liked this even more than apple butter!?!)
Whole Grain Pumpkin Muffins (next time I will add more spices...)
Low-Phe Pumpkin Raisin Muffins for Charlie
Pumpkin Mac n Cheeze (the butternut squash version has become a favorite here)
Pumpkin Pie Banana Chunk Oatmeal Cookies (tasty and satisfying)
and last, most certainly not least:
Pumpkin Gingerbread with Spiced Buttercream (I made it with half whole wheat flour and ran out of ingredients so I only made half of the frosting and still loved it!) Just the thought makes me salivate. Keith thought it was good but nothing special, but don't let that turn you away. I day dream about this bread. When I eat it I make those involuntary munching sounds and my eyes roll back and close. It is simply amazing.

Oh and there is more pumpkin goodness coming! Here is what that frozen puree is destined for:

And in case you were worried, no we have not turned orange, and no we did not eat all of the above goodness ourselves. We couldn't have all this pumpkin goodness and not share it!

So how about you all? Do you have any wonderful pumpkin recipes that you should tell me about? Because if you do, I am kind of on a pumpkin kick. (In case you didn't notice).
Posted by Katie at 11:45 AM

oh pumpkin! one of my favorite birthdays EVER was in Korea - my companion and I had pumpkin juke (soup) for lunch, pumpkin ice cream, later on, and munched on Korean pumpkin candy the rest of the day. YUMMY!

Can't wait to try some of your pumpkin recipes. Here are a couple of my favorites:http://www.food.com/recipe/korean-pumpkin-soup-75538 (use buttercup squash), and mom's pumpkin pancake recipe (she sent it to us last year). Oh, and of course those pumpkin cookies we use to make and decorate as kids.

Thanks Liz! I need to ask Mom for that pumpkin cookie recipe. That was a good tradition.

Mmmm those all sound so good. Pumpkin bread and cookies were always my favorite!! I also love pumpkin spice candles. :)