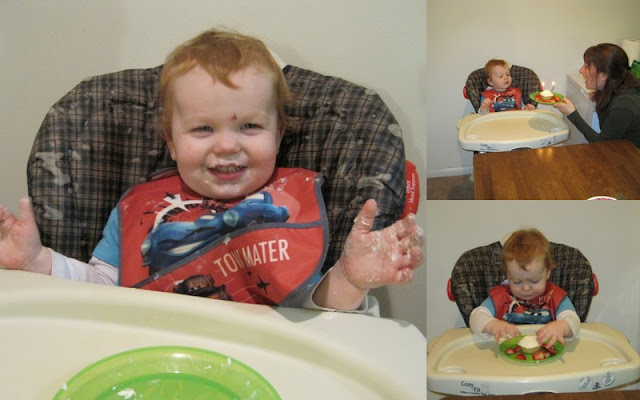 It is kind of hard to wrap my mind around the fact that as of today we officially are the parents of a two-year old. Crazy! We celebrated on Sunday with Grandma and Grandpa Merrill and Uncle Shawn who were visiting for Christmas (more on that in a later post). We had practiced blowing out the candles but he still wasn't too sure about them. He also wasn't sure what the cupcake was so he ate all the strawberries first and then insisted that I cut the cake into bite-sized pieces. Don't worry. He still got into it enough for the classic frosting face picture. To make it even more of a classic toddler boy birthday photo, he ran into the corner of my nightstand the day before and gave himself a nice little gash. 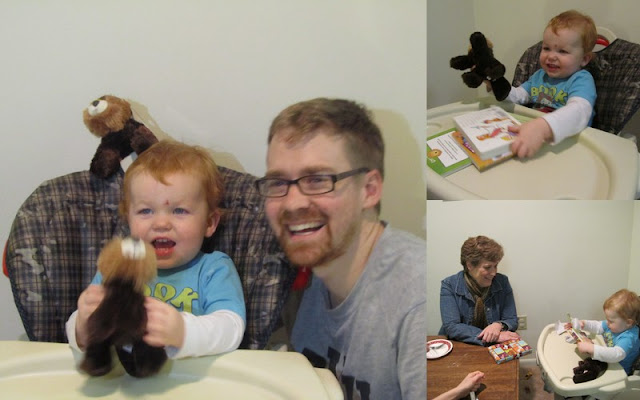 Grandma and Grandpa Merrill gave him books for church and Uncle Shawn got matching beavers so they can play over Skype. The "beebo" has now joined the "two doggies" in his bed at night.


We saved our gifts to him for later when "Ama" Temus visits. When Christmas and a birthday are a week apart the presents pile up quick!

Here are some things about Charlie now:

-He is talking up a storm!
-He has just recently discovered "no" and uses it before thinking about it which he sometimes regrets.
-He loves singing songs, especially if they have actions. His two favorites this week are "Old McDonald" (particularly the dog and cow verses), and "Wheels on the Bus."
-He is totally in love with doggies.
-He is also totally in love with Hotwheels cars. If he is asking for help, odds are he has either lost his "two doggies" or his "yeyo tuck" and "eh ta" (yellow truck and red car).
-He is best buds with Jack and gets so giddy when they play together.
-He loves walking in the woods and stepping over "bu" (bumps) which are actually tree roots and rocks. He gets pretty excited about speed bumps too.
-He is my shadow. He brushes his hair when I do, "helps" with the laundry, stretches with me and repeats almost everything I say.
-He only snuggles at night when I sing to him before bed and always says "agee" (again) after the song ends.

It is amazing how much he has grown and developed his own little personality over the past two years. Happy Birthday to my wonderful Charlie!
Posted by Katie at 12:10 PM

Hooray! Happy Birthday, Charlie! I've never met you, but feel like I know you just the same because I know your awesome parents!

Happy Birthday wonderful Charlie!! You always put a huge smile on my face!

happy birthday to Charlie! love how you love to explore your world, and love love love those cheeks! :)

Happy Birthday Charlie,
I am so excited to see you next week!! Get your books and cars ready!! Love you "AMA"