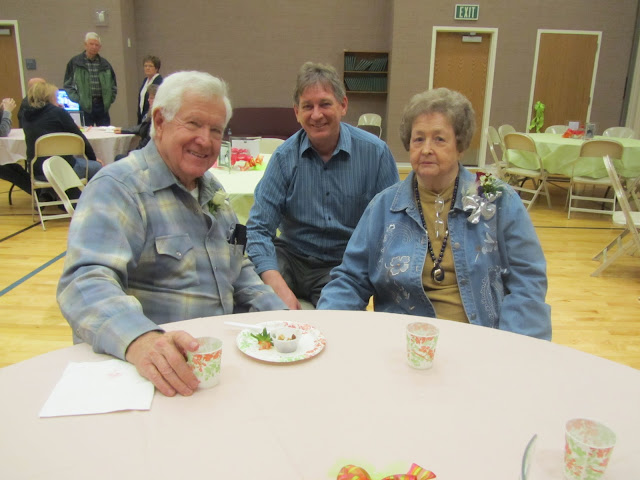 (Warning: this post contains a whole lot of pictures. Enjoy.)
By the end of our week in Utah all of the Merrill family had arrived and we were geared up for some serious family time. It kicked off on Friday with a big get together for Grandma Lowe's (Bonnie's mom) 80th birthday. All of Grandma and Grandpa Lowe's descendents were there, which was pretty awesome.

We got family pictures taken to record the event. The huge family picture was last, and unfortunately Charlie was passionately voicing his dislike of cooperating for pictures by that point. We temporarily pacified him with blueberries, so depending on which picture Grandma and Grandpa decide on Charlie will either be the kid screaming and thrashing, or stuffing blueberries into his mouth. 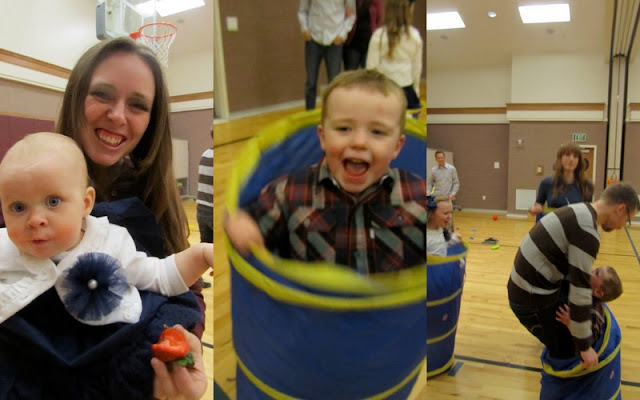 After the picture taking trauma was over we blew off some steam by goofing around while the more mature adults talked about good ol' days. Overall it was a fun night and a great time to celebrate Grandma Lowe and family in general. 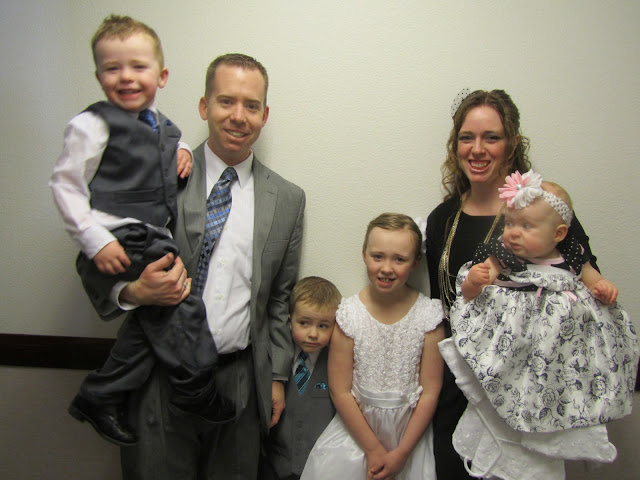 The next day was another special day. Katelyn, Joe and Bonnie's eldest grandchild, was baptized!  When Katelyn was told that they would be coming to Utah soon after her 8th birthday she chose to be baptized there so we could all attend instead of at home in Germany. Thanks for letting us be a part of your special day! 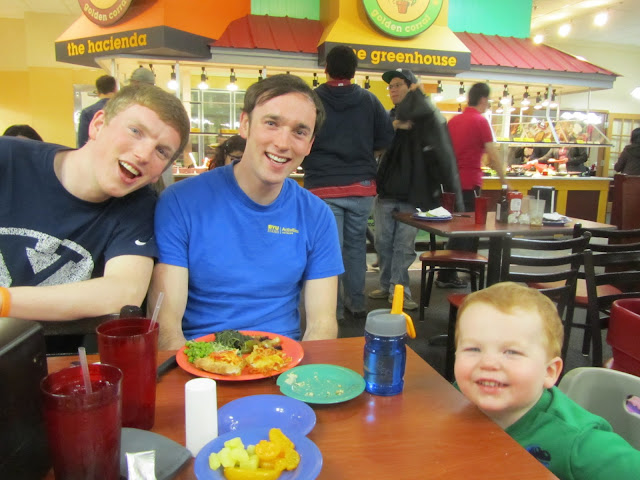 That evening my brothers (Joe made the trek down from Idaho to see me... I mean see Charlie) and the entire Merrill clan (including Jenae's parents who came from Arizona for the baptism) went out to dinner to the Golden Corral. It has been a while since I have visited the Golden Corral but it's moved up a few notches in my rankings when I realized how much there was that Charlie could eat. All we had to bring from home for him was a piece of low-pro bread, and that is pretty awesome. 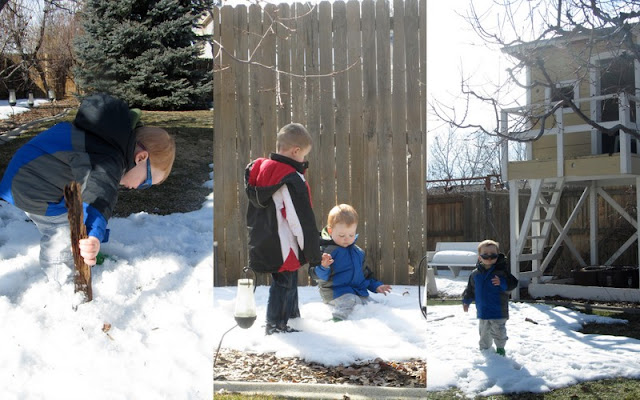 In between big family events we made use of Gramma B and Grampa Joe's backyard. It only takes living in an apartment with a toddler for a short time for one to more fully appreciate the wonderful thing that a backyard is. 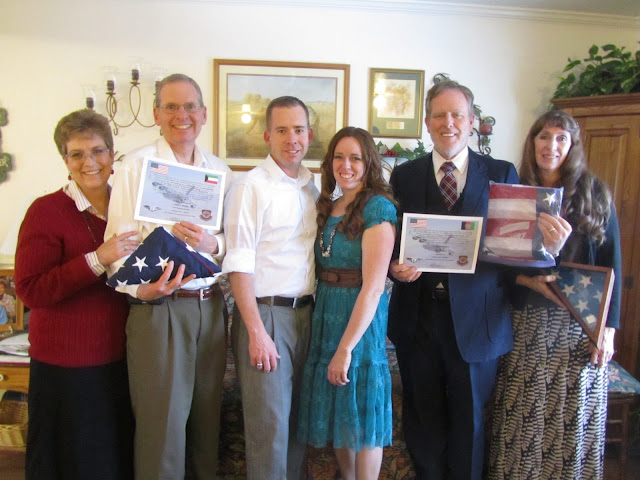 Before Jenae's parents left that afternoon Paul presented them and his parents with flags that he flew in the plane during his flight nurse missions while stationed in Germany. 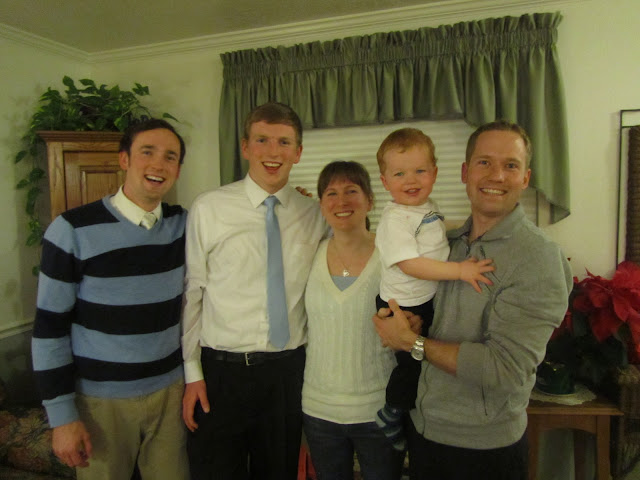 Sunday was also the last time we will see "Bug" (Alex) in a long while. He recently received his mission call to the Romania/Moldova Mission, Russian speaking and reports to the MTC in June. We will miss him but are also so excited and happy for him! 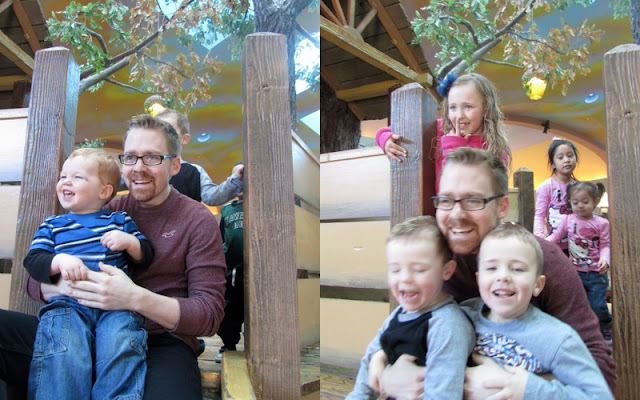 Monday we flew back to North Carolina but took all the grandkids to a play area in the mall to get some wiggles out before hand. We are all missing Uncle Shawn!

We had a fabulous time in Utah and are so very happy that we got to spend time with family that we haven't seen in a long, long time. We love you guys!
Posted by Katie at 9:30 PM

Looks like you guys had an awesome time. Charlie is getting so grown up! Fun that you got to see Joe and Alex too. The Merrill's are awesome at including everyone. Love you.

Oh how I long for a backyard. Not something I really considered much before Manu.

Sounds like an awesome trip! Glad you could visit your family!

Oooooh! I miss you all soooo much! This blog is such a gift! Thanks for posting! We love you!