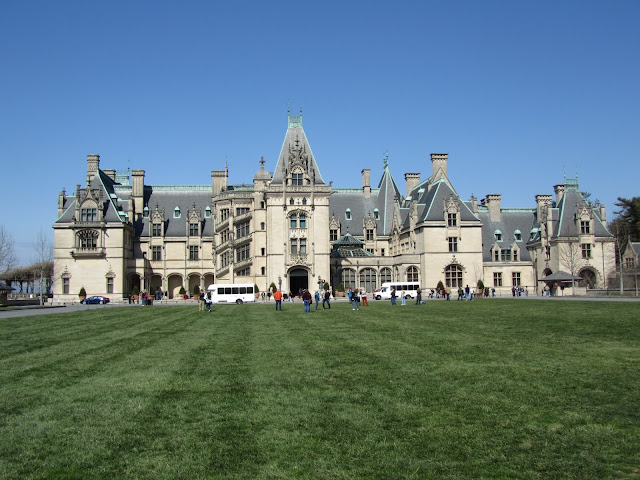 One of the places I have wanted to visit the most during our time in North Carolina is Biltmore Estate just outside of Asheville. That desire has only increased since watching Downton Abbey.  :)
Biltmore (finished in 1895) was the home of George Vanderbilt and his family. It is the largest privately owned home in the US. 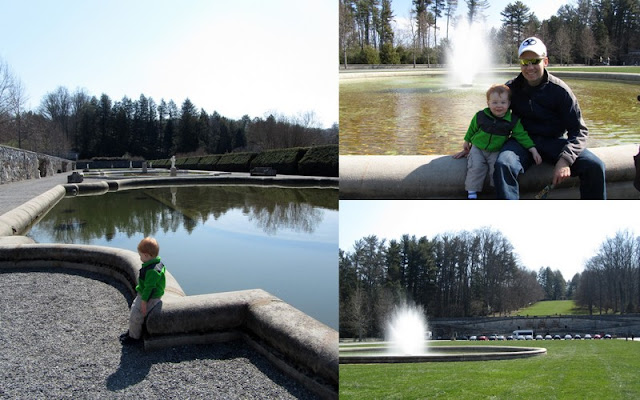 Charlie (and his parents) wouldn't have enjoyed this trip nearly as much if it hadn't been for the presence of his Gramma and Grampa Temus. Grampa was just finishing his weeks of work in Greensboro and Gramma flew out to join in the fun. Keith and I explored (a small portion of) the extensive grounds with Charlie while the grandparents toured the house and then we switched, leaving Charlie with his Ama and Papa. He napped in the stroller and ran around outside while Keith and I enjoyed a few hours of a mini-date on our tour of the house. As Charlie's brief stint inside the house proved, touring it all together would have been impossible and would have included a whole lot of melt-downs over not being able to run around and touch everything. 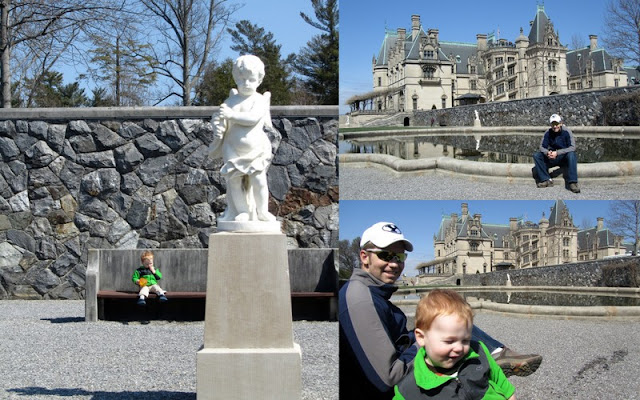 I actually first heard of Biltmore back in my undergrad days in a few of my forestry classes. George Vanderbilt wanted a scientifically-managed forest for the large unfarmed area of his property. To achieve this he hired Frederick Olmstead, a landscape architect, to manage the forest. Olmstead published the first scientific article on forest conservation and management from his work at Biltmore. He convinced Vanderbilt to hire Gifford Pinchot whose forestry management plan for Biltmore became the national model for forestry management. He created the first forest management school during his time at Biltmore and when he left he went to Washington D.C. to head the division that would later become the U.S. Forest Service. So all this just goes to show that Biltmore plays a bigger role in conservation and land management than is immediately evident. 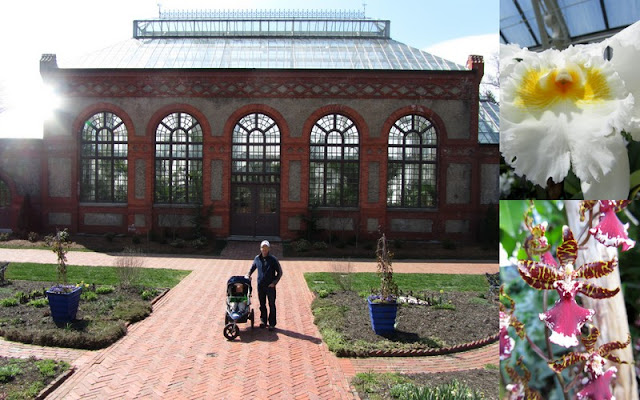 Spring was just hitting the Appalachians (where Biltmore is located) so the huge gardens weren't doing much, but the large conservatory was full of color! Vanderbilt, along with the rest of high society at the time, was a collector of orchids and they were on display in mass. 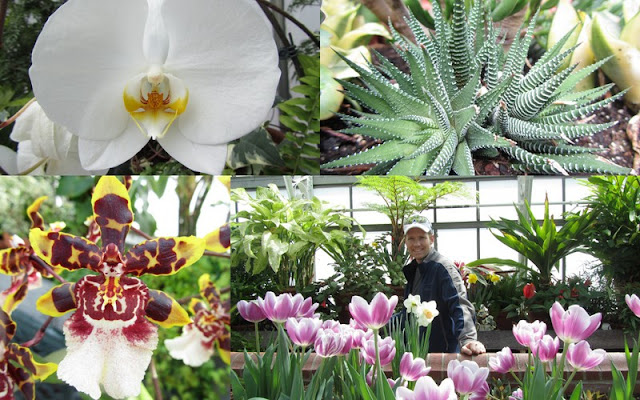 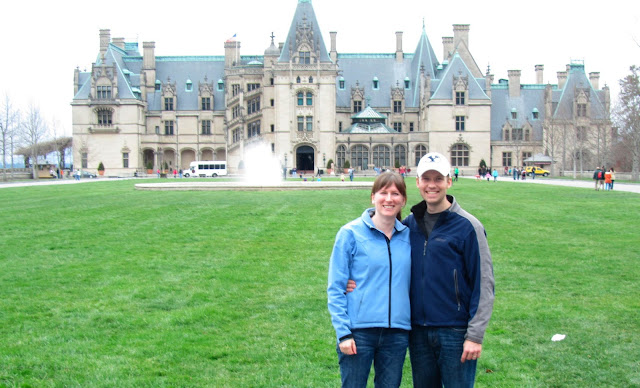 Photographs weren't allowed inside, but it was pretty awesome. I had a few favorite rooms, loved the views from the upper levels, was very impressed by the unique architecture, but the basement and the servants areas were absolutely fascinating. The methods and new technology of the day that they utilized to cook, do laundry, and do everything else that it needed to keep a place of that magnitude running every day were really interesting to me. If you ever get a chance to visit, I would highly reccomend it! 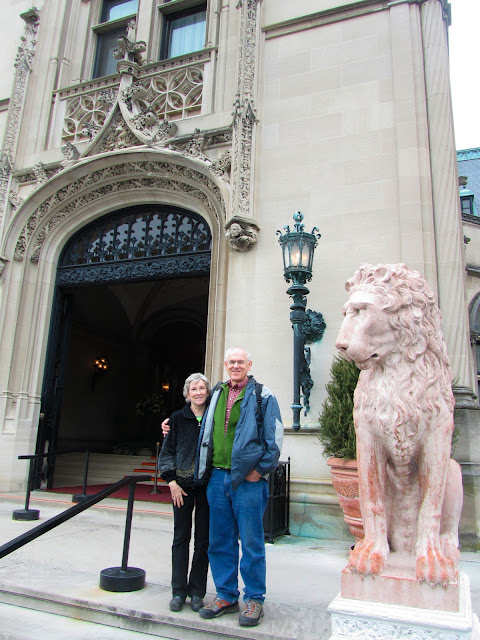 Thanks Mom and Dad for coming with us and making the trip even better! 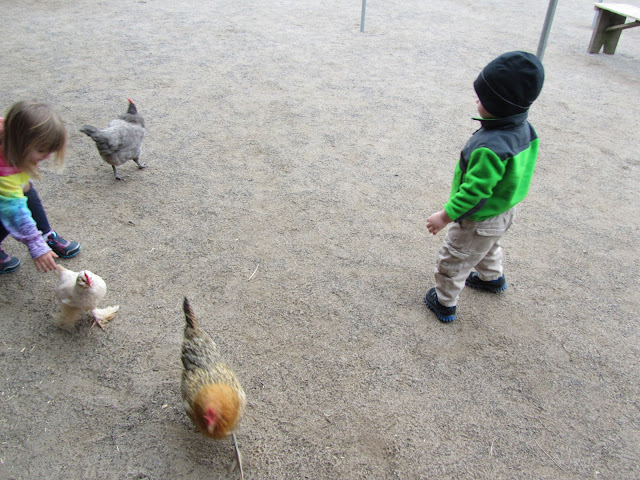 On our way back to the hotel we stopped by a little village on the estate that was established for the estate workers. It now has a little petting zoo (the chickens were the only ones out and about when we came by) and shops. 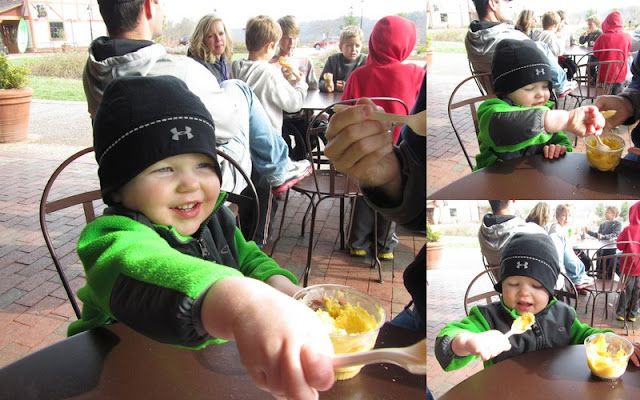 The highlight of the village visit for me was buying Charlie ice cream for the first time. Charlie can have most sorbets but going to restaurants, including ice cream shops, with PKU generally stresses me out a bit. We are getting better at it though, realizing the it is going to be a necessary skill for Charlie in the future. Picking something out for Charlie at the ice cream shop would mean asking extra questions at the counter and I have a tendency to not be gutsy in situations like these, so when I saw how very busy the place was I almost decided against it. The lady taking my order was very helpful though and took the time to locate and let me read the ingredient list of the the only dairy-free sorbet they carried. It was perfect for Charlie and he was thrilled but might have loved sharing with everyone else more. It gave me a lot of mommy-satisfaction to see my boy eating ice cream at the ice cream shop just like everybody else. 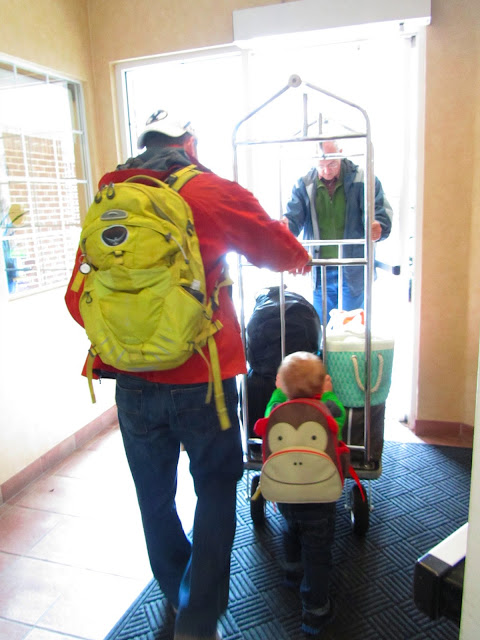 The next morning we explored Asheville a bit (oh the chocolate shop!!!) and then headed home. Two hours down the road (about halfway home) we stopped by a place called Old Salem which is a preserved/restored colonial town that was settled by the Moravians (a Protestant group from what is now the Czech Republic). 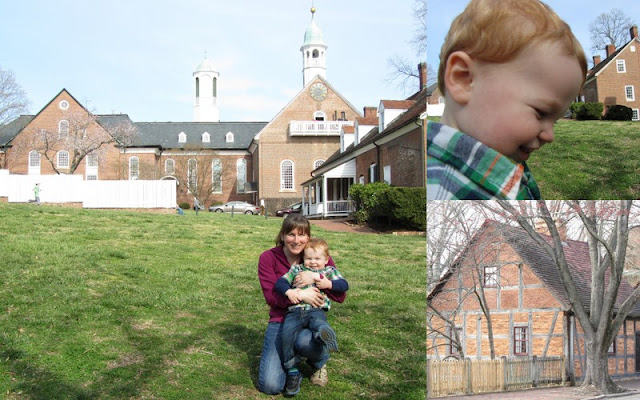 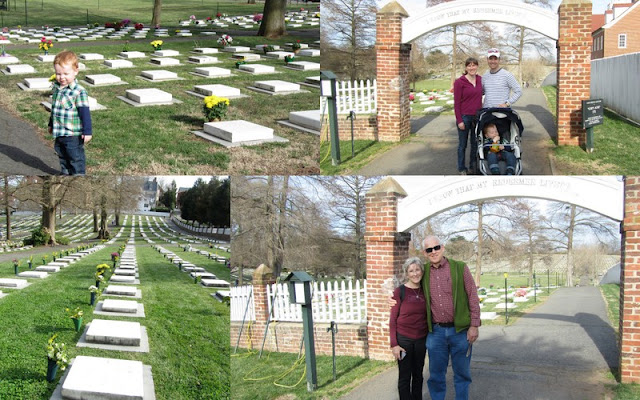 Our favorite part was the cemetery. It was Easter weekend so the community was getting ready for the traditional Moravian Easter sunrise celebration. Flowers were placed at each of the uniform headstones and early Easter morning the congregation and community would gather to parade through the cemetery, sing, and celebrate both Christ's ressurection and the coming ressurection of their loved ones. I loved both the simplicity of the cemetery (no ostentatious headstones) and the joy that they put as the focus of Easter.


We had a pretty low-key Easter the next day at home. Church, and the messages of hope, peace, and joy were the highlights of the day. Charlie all dressed up in his new Easter outfit and playing with his Easter basket was pretty great too. ;)
I, along with many others in the family, felt like this was the most meaningful Easter we had ever had. The promise of the resurrection is a lot more meaningful now and we hope for it and look forward to it more than ever. For it is then when we can be reunited with Brooke and all those who have passed on. I can't even express what that means to me. It is too big for words.

Thank you again Mom and Dad for a wonderful Easter weekend!
Posted by Katie at 12:56 PM

That estate was so beautiful!! And loved Charlie and his ice cream. I struggle with being assertive all the time and I don't even have to worry about PKU so a huge high-five from me! Happy Easter to your wonderful family. My thoughts were on you guys and sweet Brooke.

I'm with Spring, Hurray for our Savior Jesus Christ and the gift of resurrection!
Hurray too for brave cute mom's, ice cream, forests, orchids, turtles and parents visiting. :)
Thanks for the awesome pictures.

Hooray for Charlie's ice cream! Sounds like a wonderful, relaxing trip. I'm such a sucker for orchids. And for your cute family!
(Great talking with you the other day. Still working out details on this side)