It has been three weeks since came home from the hospital. So much has happened in those three weeks!

Wednesday (Dec 04), after a full morning at the hospital doing an EKG, x-ray, functional MRI, blood work, learning what to expect for the surgery, and getting my last decent lunch, I checked into the hospital. The functional MRI (where I did various tasks while having the MRI) showed that there was good separation between the functional parts of my brain and the tumor. A little miracle unto itself. That evening I had another MRI (the one where I got the probes on my head) and tried to get some sleep.

The following morning (Dec 05), I went into surgery, and the next thing I remember I woke up under a blue tent unable to move my head. It kind of felt like having tunnel vision. There were two people that I could see. I had seen both before, which helped put me at ease. One was the anesthesiologist, and the other was the brain surgeon's PA. I could hear others in the background but those two were the only ones I saw. The PA kept showing me flash cards and would occasionally peek behind the curtain to where the surgeon was. I was aware of pressure sensations in my head, which can only be described as weird. I can't know for certain but I think I felt the screws being placed in my head and being sewn back up. 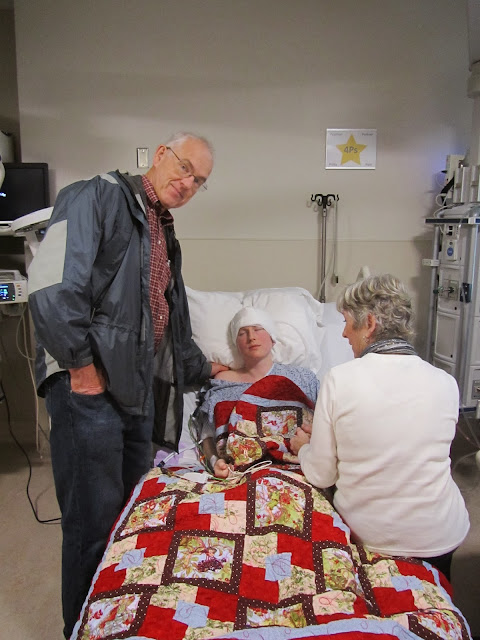 My coordination and speech (as expected) were fine for the first little while and then got much worse before improving again.
Another thing that surprised me was all of the medications was put on and slowly taken off of during the following weeks. At different points I had IV lines in both arms, with medications almost constantly flowing through them, and received two painful injections into my abdomen, not to mention the pills I was taking regularly. At some point post-surgery I was visited by the surgeon who showed us with his hands the size of the part of the tumor he removed. I was kind of surprised at how big it was (about the size of a tennis ball), because I knew he hadn't been able to remove it all.
I want to thank every single person who has fasted or prayed for me and my swift recovery. They have made a huge difference. There have been individuals from literally around the world and all types of religions fasting and praying for me and I can't even express how humbling it has been. Every time I hear about someone who is fasting and/or praying for me I am deeply touched beyond words. Thank you!

Another little miracle that has occurred over the last few weeks is that Jane has returned to nursing without missing a beat. While I was taking steroids to reduce swelling in my brain I couldn't nurse so my sweet sisters pumped and sent out frozen milk with my mom. Once I was safely off the steroids Jane went back to nursing as if she had never stopped.

Perhaps the biggest miracle, aside from my quick recovery in general, is my complete lack of seizures since the surgery. That is right. I haven't had a single seizure since the surgery. That was not at all expected by the doctors. They told me that the most likely scenario would be that I would remain on anti-seizure drugs indefinitely. At this point I am slowly weaning off one of the two medications and plan on doing the same with the second soon. I feel like I have my life back.
Posted by Katie at 10:52 PM

Katie, that is so awesome but expected! I am so happy for you and glad all is going so well. You are still in our prayers! Lynn and Tess

Katie, that is so awesome but expected! I am so happy for you and glad all is going so well. You are still in our prayers! Lynn and Tess

Katie, you are amazing, especially under such difficult circumstances. I respect and admire you even more than ever. The many prayers have blessed your recovery to be so much better than we really expected. We are most grateful for friends and family with mighty faith and concern for you and our family during this time.

You have no idea how incredibly happy this post makes me! I am so grateful that you have recovered so well and that you are so well taken care of. You will forever be one of the few people I know whoCan truly handle any situation with optimism and faith- we keep praying for you and your sweet family.

My heart is touched with your stories and I love the pictures. Thank you for sharing the pictures along with your narrative. I have to agree with you about your family - they are remarkable and you are all well loved. I will continue to pray for a full recovery and non-recurrence of the problem.

You make brain surgery sound like an adventure! We have been thinking of you a lot, especially during the holidays. So happy you are seeing the blessings around you. Love you!

that is awesome! We are so glad to know everything is going so well. we love you
Rick, Rebecca,Lydia, John-john and Richard

Katie, this post makes my heart sing! I am so happy to hear that there are no more seizures. I also love the photos of your family gathered around you at this time. You are so special to so many people and it's great to see the love of family and friends enveloping you during this time.

Little Jane is a perfectly sweet chunk of a baby and your new hair cut makes you look a lot like your brother Joe. Good news, since he's a pretty handsome fellow. Ha! I had the same experience when I cut my hair super short.

Katie, you are amazing. Beautiful inside and out and so full of strength and grace and patience. I love you and can't wait until I can see you again.

Katie: Thanks for posting the pictures and updating us. We were longing to hear more. The Lord will and has blessed you so that you may accomplish the things in life that you were sent here to do. Love, Steve & Carol

Yay Katie!! Oh I think of you often and cried seeing the pictures of your parents with your kids and hearing of your sweet sisters pumping and sending milk for Jane. God is good. So glad recovery is going well and so glad to have an update! Love you!

Hooray! It is such a relief to hear the miraculous news of your continued recovery. Thank you for sharing it here for all of us.

I love seeing all the pictures of you with your dear family gathered around you.

I was at work all day yesterday and when I got home at about 8pm Nate said "you'd better go read Katie's blog." He wouldn't tell me what it said though and about made me have a heart attack by insisting that it was urgent and needed to be read before dinner! So glad to hear this great news!

You are amazing Katie! It was wonderful to read the update and we will continue to pray for you and your family as you continue feeling better. I'm so glad it all went well.

We are so glad you and your family are doing well. Still keeping you guys in our prayers.