A Stop-over in Washington

I know it is almost Christmas and I am just now posting about something that occurred way back in Aug/Sept. I have the normal excuse: I've been busy. But I just had to document this and I knew if I posted anything before I did I would never get back to it.
Be forewarned, there are a TON of pictures here. It was just so hard to decide which to keep and which to pass over! 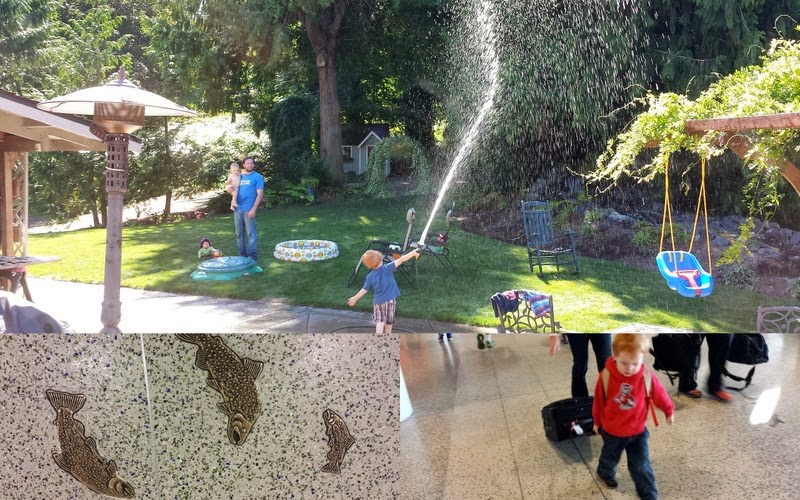 We arrived at the airport with my sweet mom who flew there with us. I love the excited feeling that always comes with arriving at the Seattle airport. I love the instant feeling of coming home; not only to my childhood home, but also to my Northwest home. The airport has salmon and leaves swirling and swimming around on the floor, the drinking fountains make the sound of a gurgling brook, and almost every shop has a depiction of "the mountain." Charlie insisted on pulling the suitcase all by himself (except up the "big" hills). And once we got home, oh boy! Charlie went into fun mode right away. 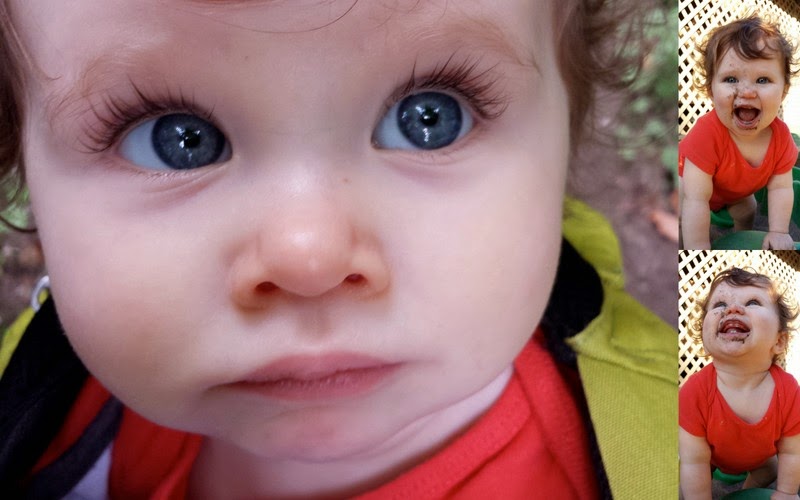 Jane loved it too. She rode happily in the front carrier on our hikes (which was a shock) and loved playing in/eating the sand and water. 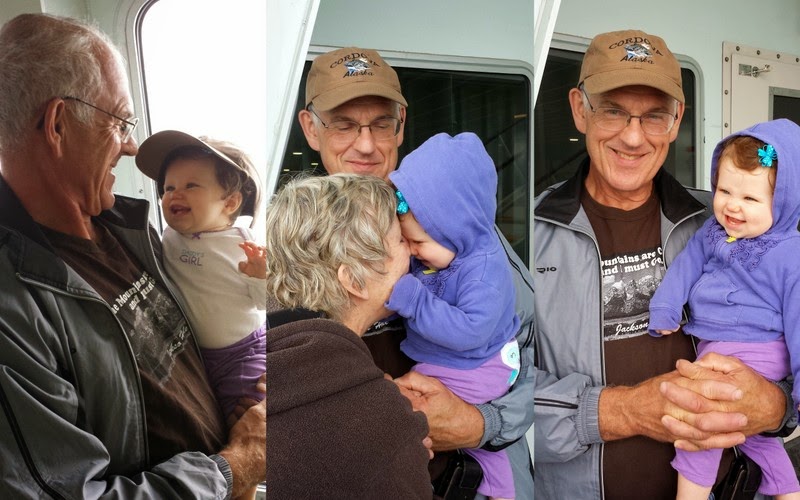 She especially enjoyed all the attention from Grandpa and Grandma! 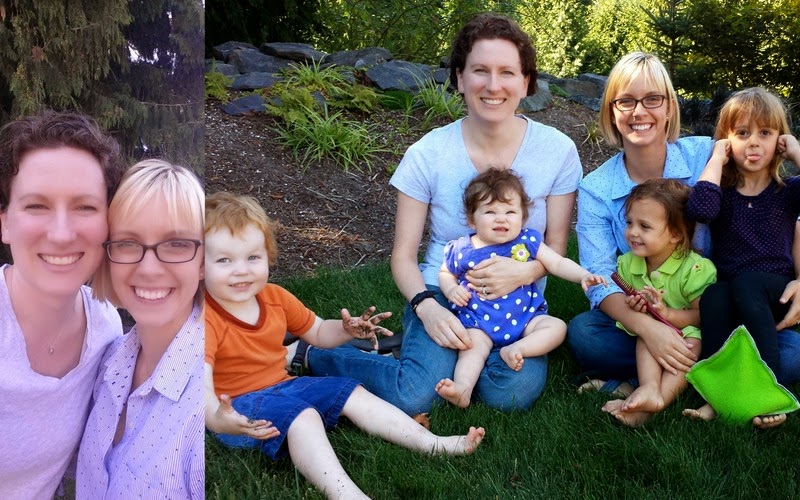 A big bonus of my recent trips home is that I get to see my former roomie Whitney and her girls! I love getting together with her (and what each of the kids are doing in the picture on the right). 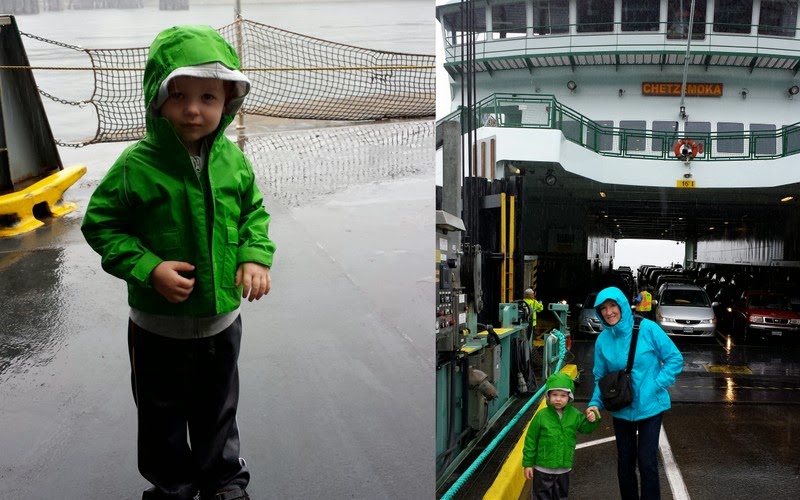 Charlie went on his first ferry boat ride. He was both fascinated and apprehensive on the first trip but by the time we re-boarded after a drive around the island he was nothing but excited. It was fun to see the little wheels turn in his head as he figured it all out; the bridge raising and lowering, the tunnel that the cars went in one side and came out the other, and what the various parts of the ship were for as we walked around on it. He walked off on the island end and watched with great interest as the cars drove off. 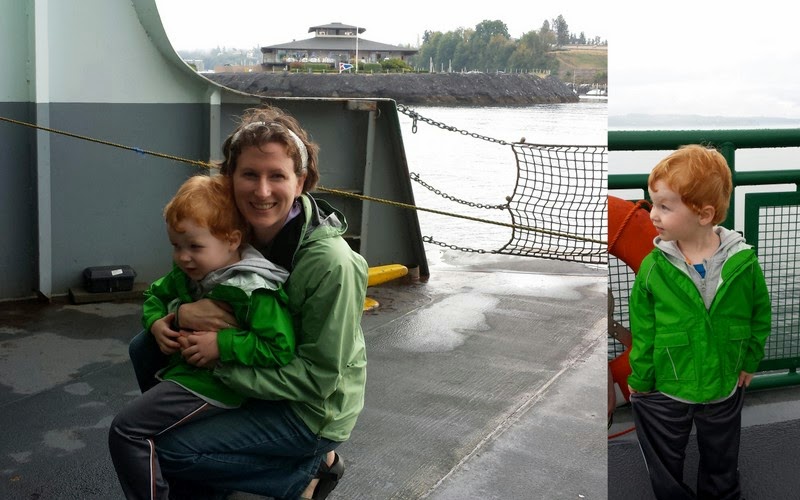 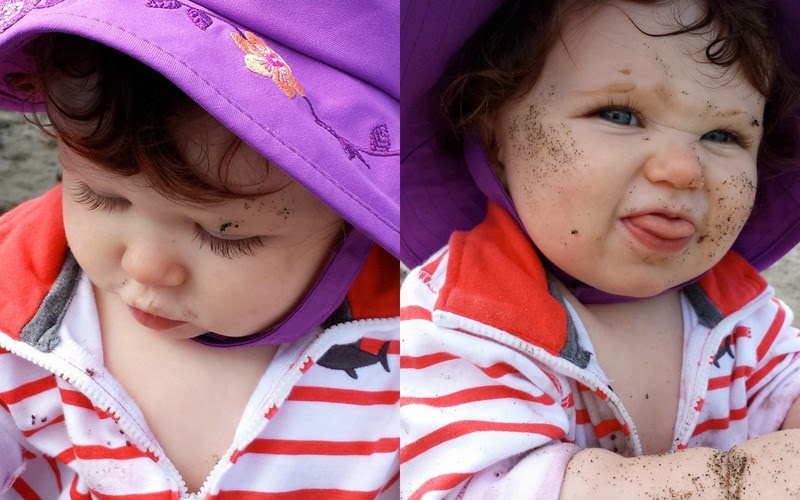 Sarah put together a group a couple years back called "hiking with kids." They go on a hike each week or so in the summer to kid friendly trails. The one we joined in on was near a big sandy beach, where the kids happily got covered in sand. 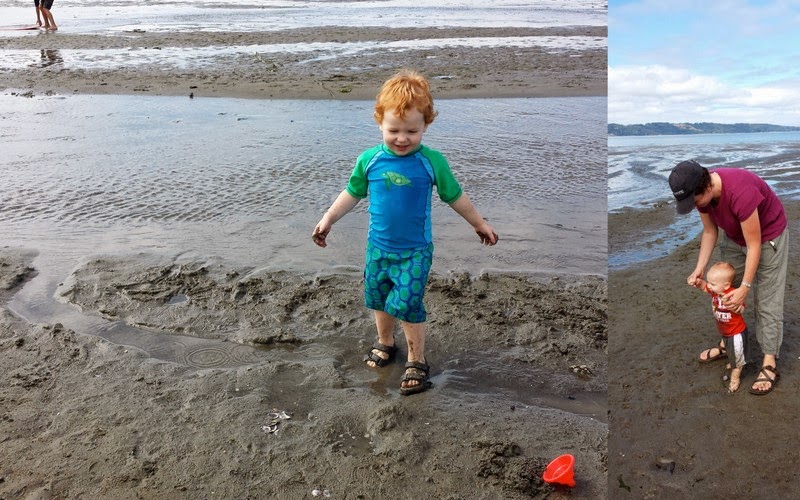 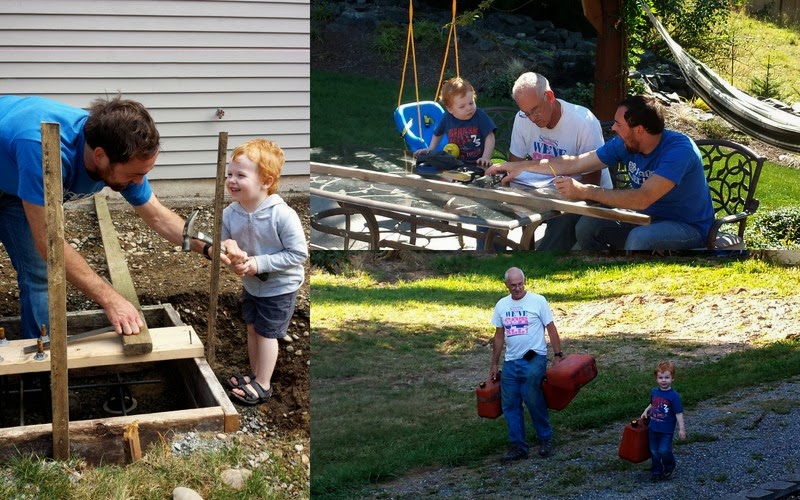 The icing on the cake for the whole thing, as far as Charlie was concerned, was the deck construction project going on outside. It is no secret that Charlie is fascinated with all things construction/machine related. He "discussed" the plans with Papa and Uncle Joe, helped frame and pour the concrete supports, helped fill up gas containers, etc etc etc. 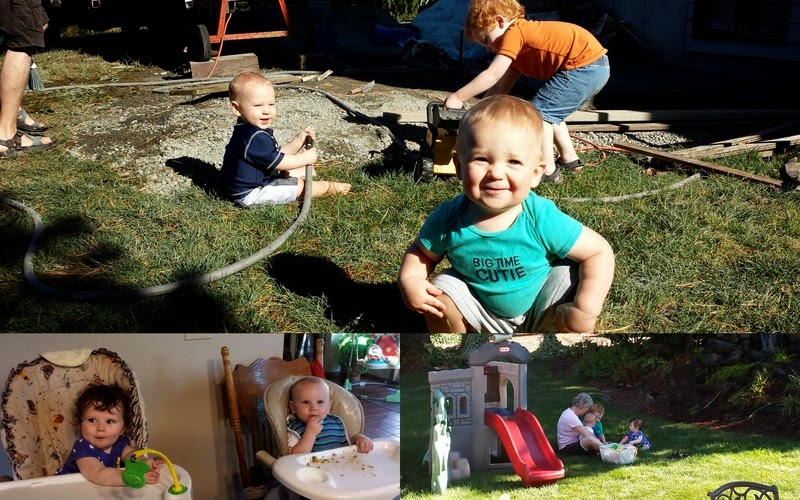 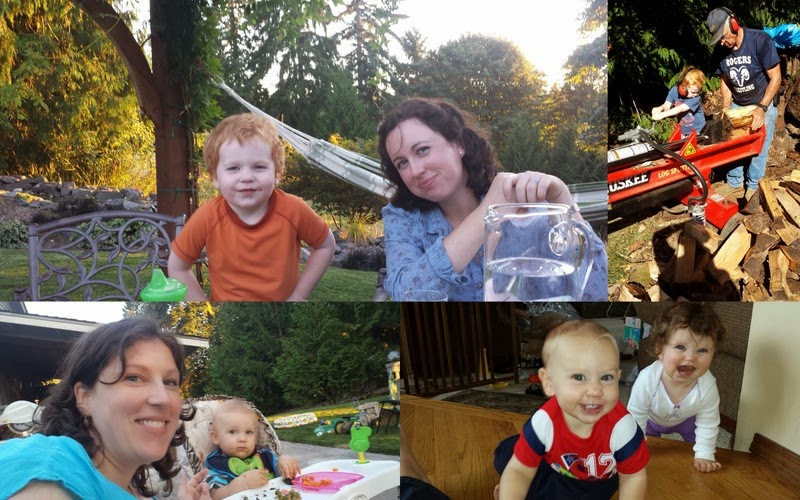 Charlie also LOVED helping with the cutting and stacking of wood. He got quite profecient at operating the wood splitter, loading the wood onto the tractor, helping Joe drive the tractor to the wood pile and unloading the wood. Needless to say, he slept very well each and every night. 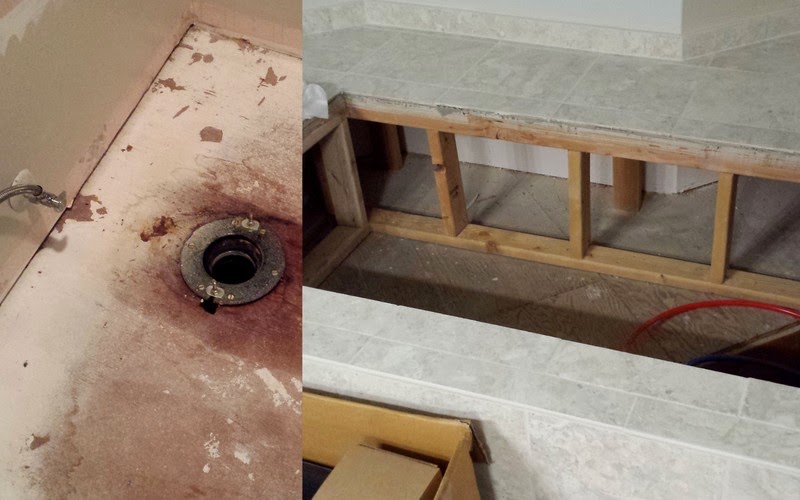 Mom and Dad were renovating various areas within the house as well as building the deck (they were having a very busy summer), one of which was the master bathroom. One of the first days we were there, before I had seen the upstairs, Charlie came running down the stairs to tell me with a very concerned expression, that there were "some problems" he wanted to show me. He took me by the hand and urgently led me up the stairs. He led me first to the bathroom where there was a hole where the toilet had once been and told me quite matter of factually that this was the first problem. Without letting go of my hand he took me to where the bathtub had once been. With an even more serious tone he told me "and this is a really BIG problem." Later when I told the story to my mom she said she should call the contractors (who were having difficulty showing up when they should) and tell them that even her 3 year old grandson recognizes that this is a problem! 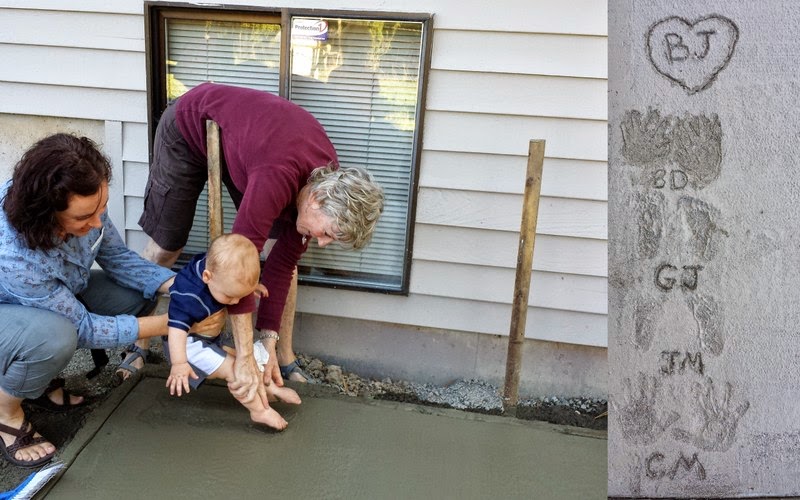 When my parents built our house they put Liz and Sarah's hand prints and my foot prints in a bit of concrete on the patio. They are still there today, purposely preserved when the patio was redone about 7 years ago. Anyway, we thought that it would be fun to do the same thing with the grand kids. Although it took a bit of coordinating, (the concrete drying, naps, etc) we successfully (more or less) put the kids mark on the platform that will serve as the base of the stairs for the deck. 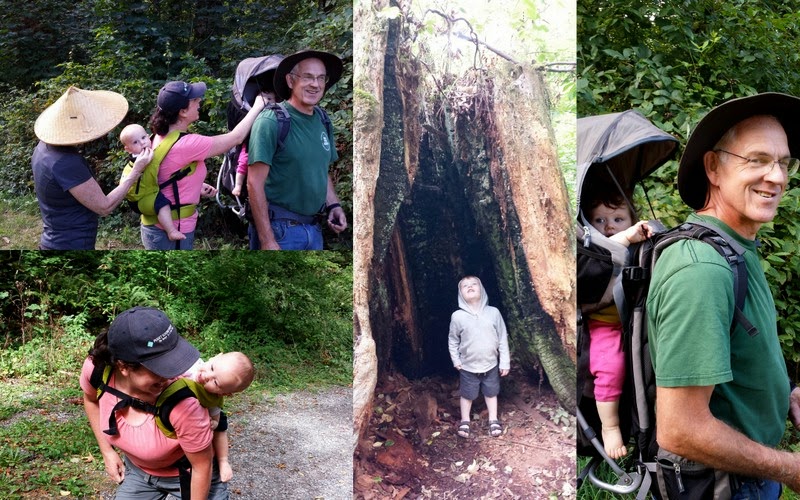 Hiking and eating blackberries in the woods next to our house. 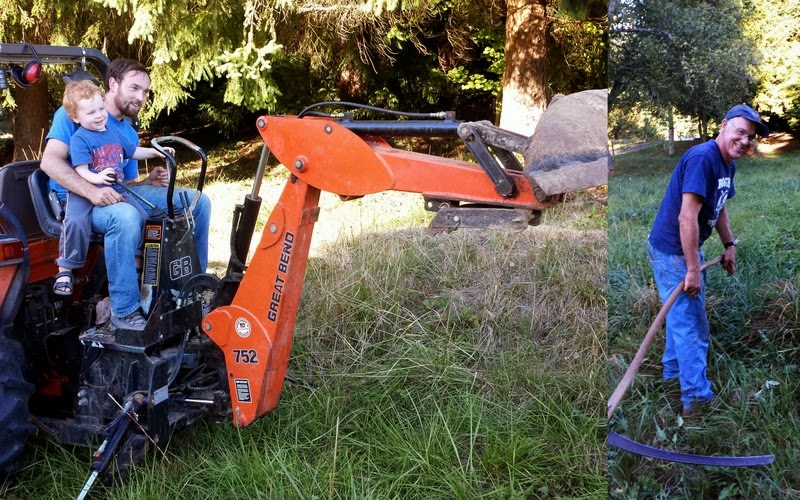 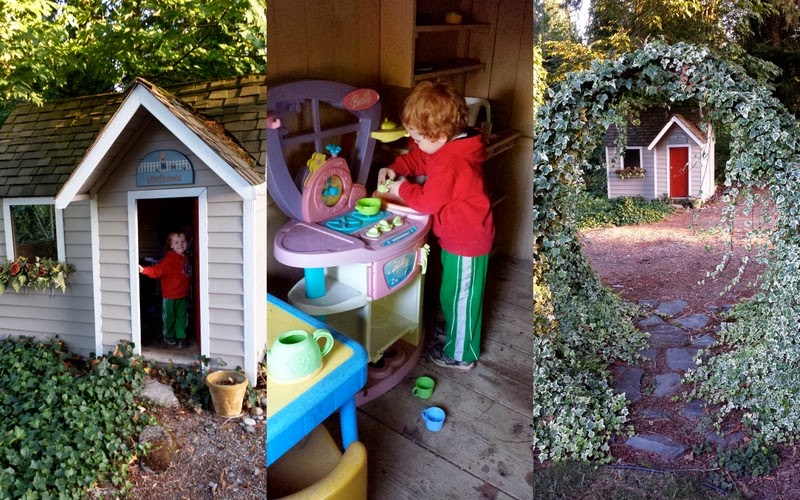 Charlie serving me up some dinner in the old playhouse that used to be my Grandma's. Her brother, Lyman, built it for his kids and then sent it up the hill from the Puyallup valley it to my grandma to use for her kids. I remember playing in it at her place (just adjacent to our place) as a kid. Later it took another trip up the hill to it's present location, where it was next to the wooden big toy that is sadly not there anymore. It got a paint job back when we painted our house. 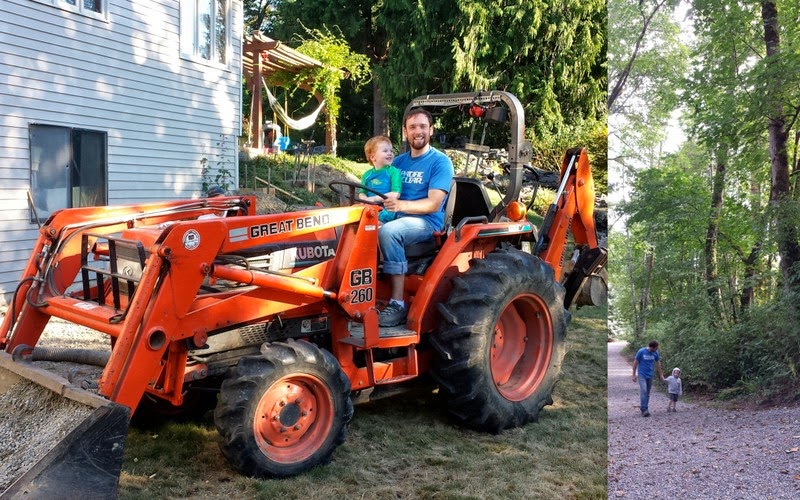 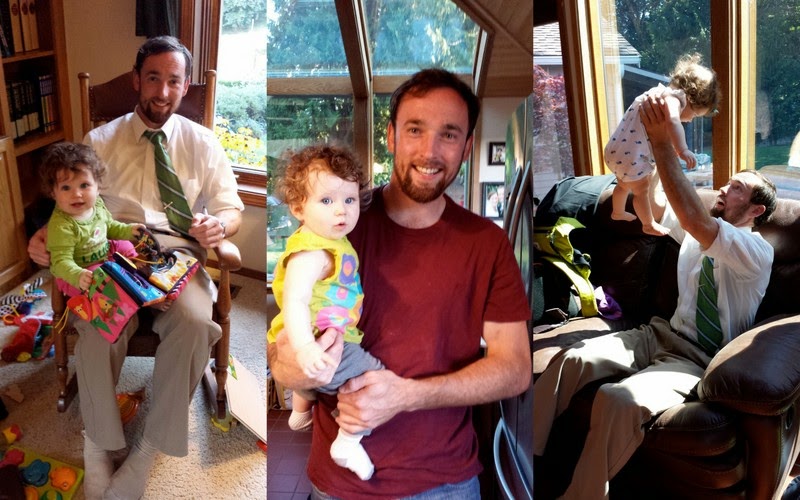 Jane bonding with Uncle Joe after a rough beginning. He gave her an "airplane ride" (i.e. flew her around the room) soon after they met and from that point on she would cry when he got close to her. Until he gave her some watermelon, which she can't resist (something I figured out shortly before this trip). He showed her a piece as she was taking refuge in my shoulder and she quickly snatched it up and then retreated like a cautious little animal. After several of these interchanges she warmed up to him and they were like best buds from that point on. 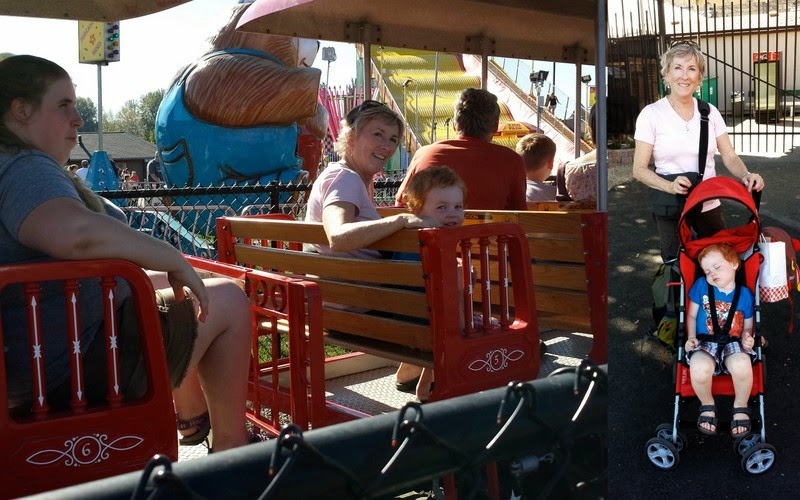 The Fair! It had been quite some time since I had "done the Puyallup" and I was excited to introduce it to my kids (Charlie had gone once before but he was younger than Jane at the time so he wouldn't remember). We were on the way to let Charlie pick out some taffy (a fair tradition) when he fell asleep, hard. 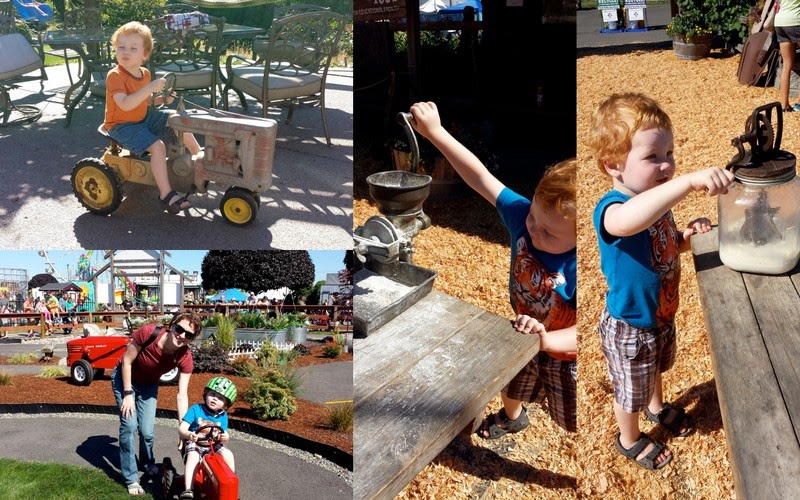 It was really fun to see him enjoy so many of the same things at the fair that I did as a kid. 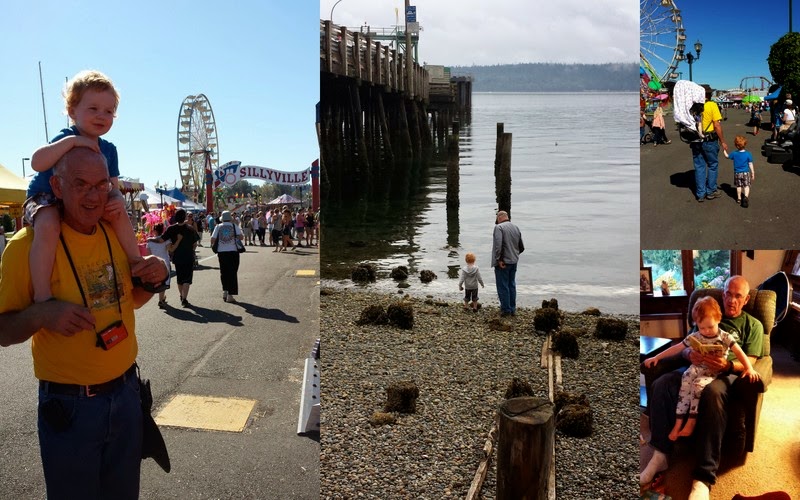 This collage isn't just fair pictures but I like all the pictures of the two Charlies. 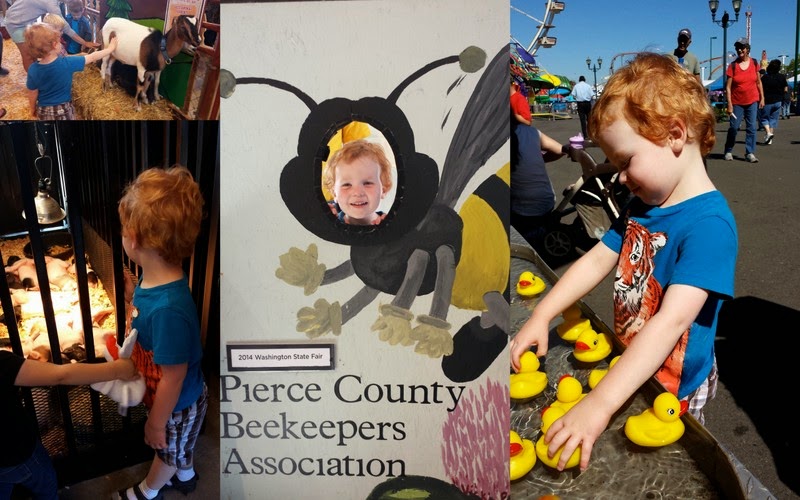 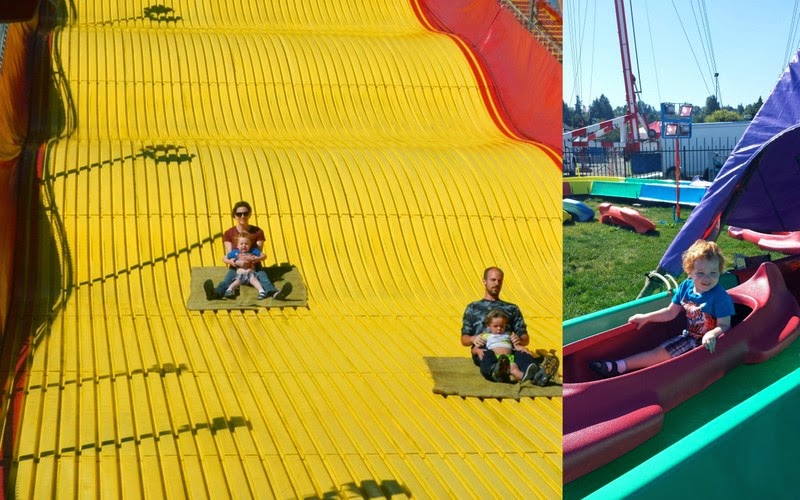 One of my favorite rides: the Giant Slide! I really wanted to do it with Charlie but was some what worried that he would get scared at the height and decide that he really didn't want to go. Much to my surprise and glee he didn't show any apprehension except for a fleeting gasp at the first drop. 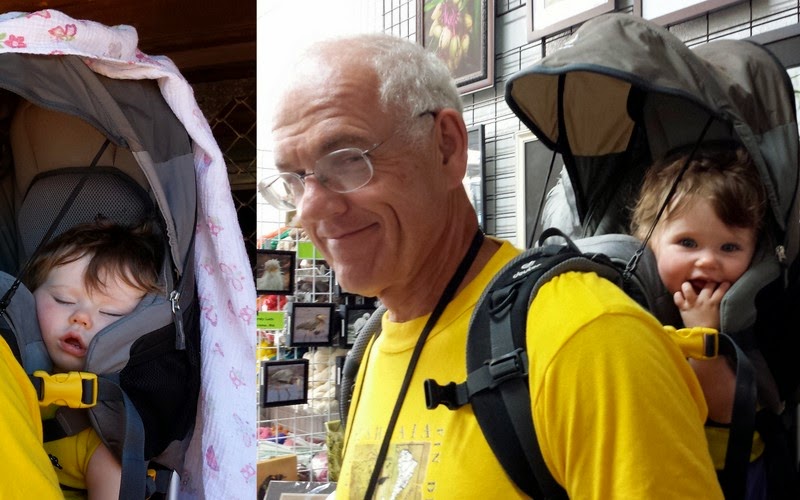 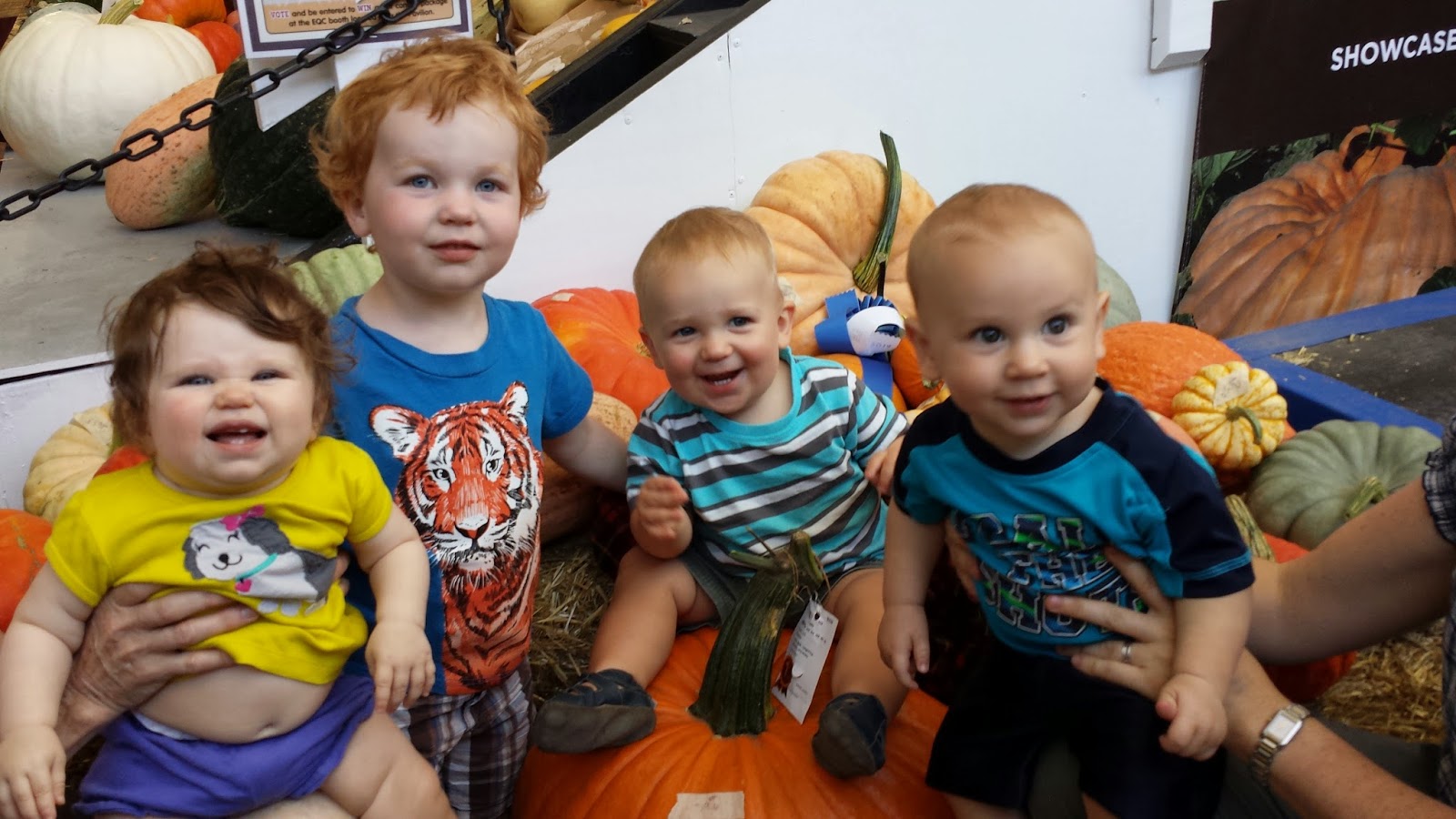 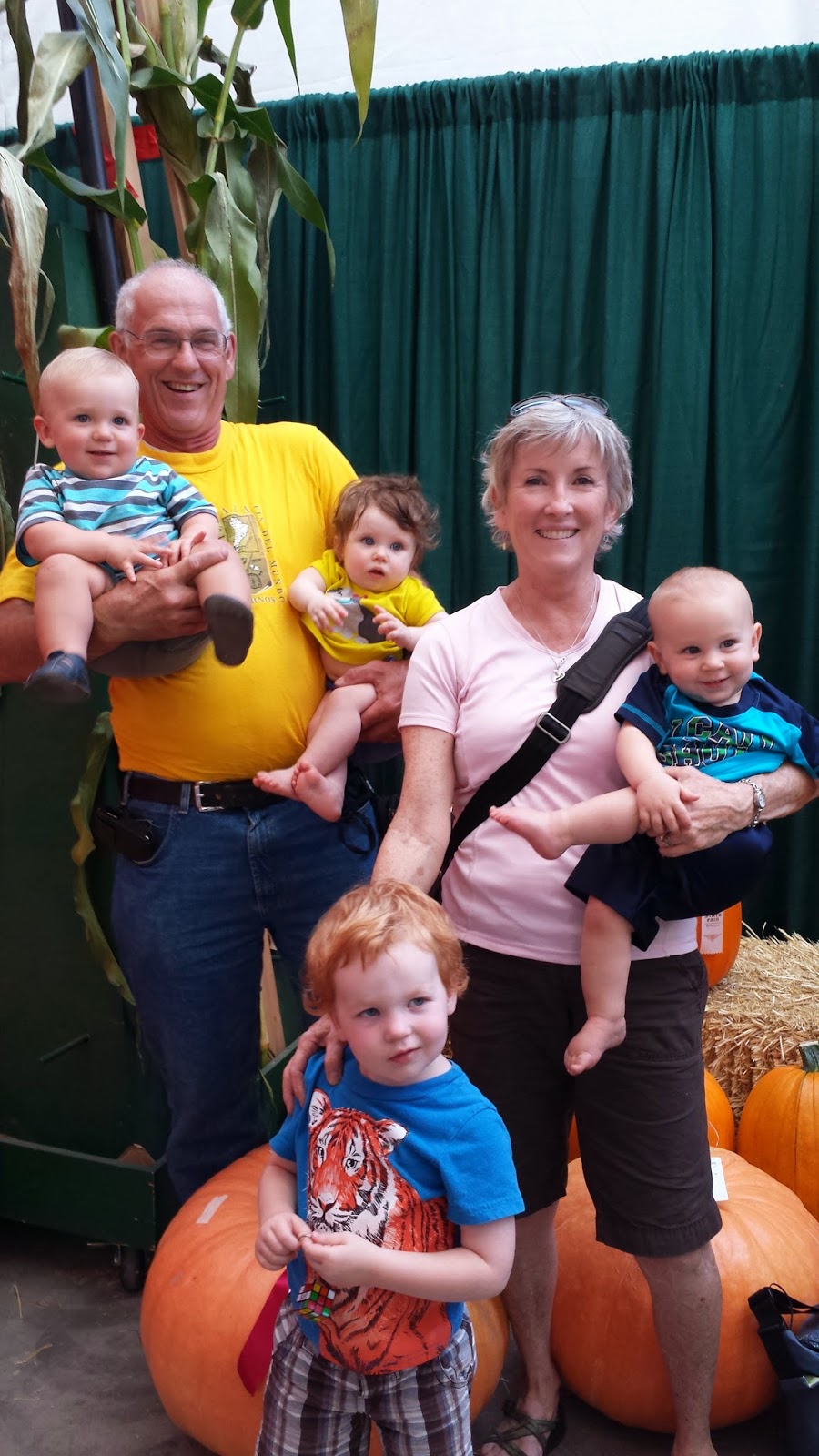 The best picture of all (except the traditional family pumpkin picture which was tragically lost): Grandma and Grandpa with the grand kids. This one always makes me smile. I am so happy that my kids have these two wonderful people for grandparents.
Posted by Katie at 11:45 PM

Haha...what a delightful post! Thank you for the fun pictures and stories. Makes it feel like being there and those are the cutest Grandkids ever. :)

Oh LOVE all these pictures!!!! I have never seen your mom grin bigger than when holding her precious grandchildren! Love ya tons!

What a wonderful time, at that point in place and time, and at this time of your life!

This sounds like such a delightful trip! So glad you got to spend time with your sweet family!