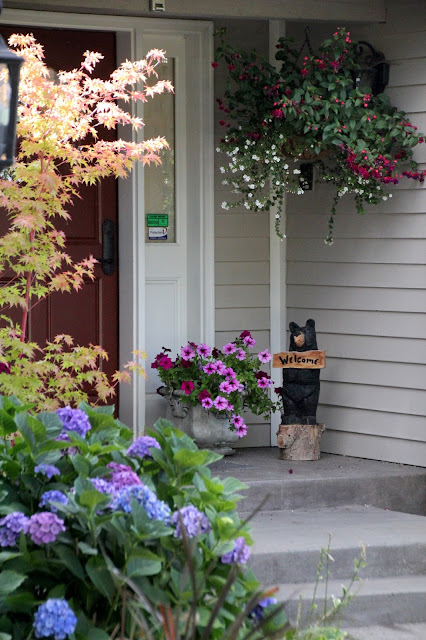 A couple of weeks ago Keith, the kids and I took a trip back to my parent's place for a family reunion. Alex, my youngest sibling, had returned from his mission and school would start soon so it was the first time in a while that we could be all together.

While we were there our good friends Ian and Cheryl, now retired, were staying in their 5th-wheel in our backyard for the summer. They live part of the year in California and part in Washington (with a bit of road-trippin' in between). They they have become, by far, the closest neighbors we have ever had! Cheryl took a lot of photos while we were there, mostly of the kids, but also of our home. I was beginning to sort out pics for a post on our trip when I realized that I kept on getting caught up in the memories and emotions that these pictures brought back. This is the only home I had ever known. We moved in shortly before I was born and I never moved until I left for collage.

At first I hesitated to make a blog post about home just because it could get so long. There is so very much in each picture that I could talk about! (I will try very hard to not give too much narrative.) And how could I possibly choose which pictures to include and which to cut! I also worried about sounding like I was bragging. In the end I decided that this place and the memories I made here meant too much to me to not share it. Even if it is just for my own sake. 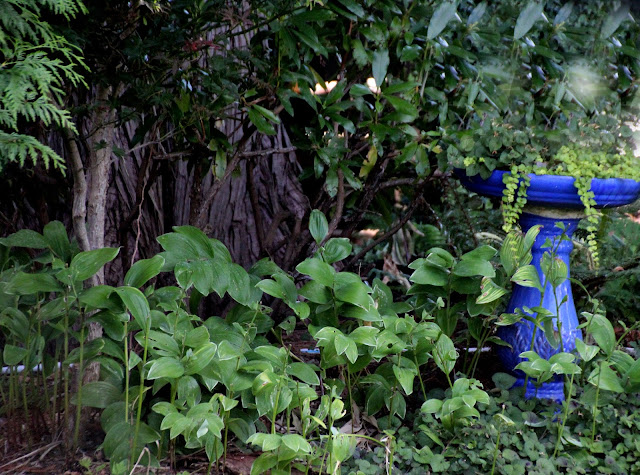 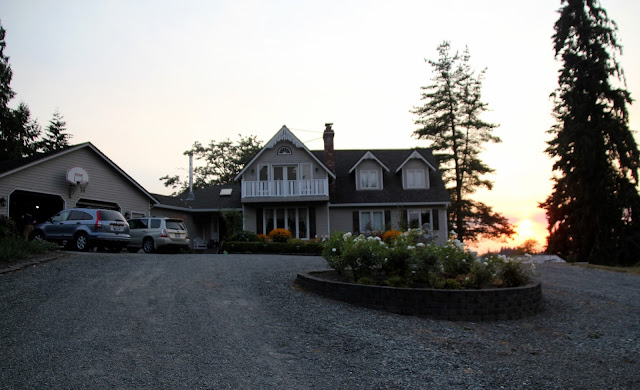 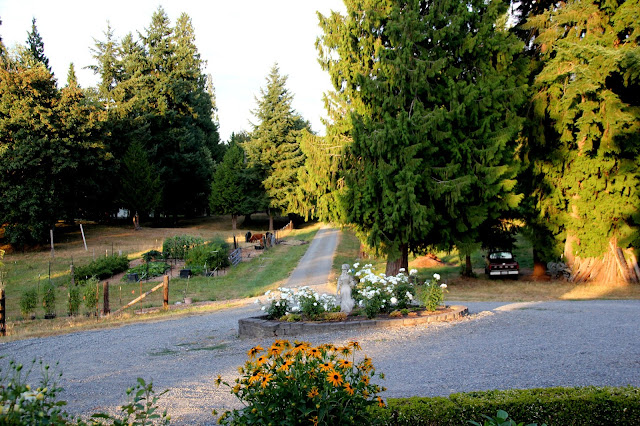 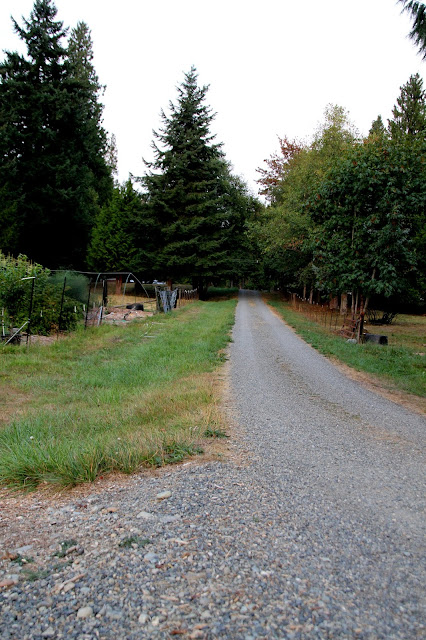 Our elementary school bus stop was at the end of the long gravel driveway. You can't see the end from the house, but we had a very protective black boarder collie named Hector who would take us to catch the bus each morning. He would walk with us to the end of the driveway, wait with us for the bus and then as soon as the bus door closed he would turn around and go back up to the house. Mom would be watching for him to come back and when he did she would know that we were safely on the bus. Some how he always knew when the bus would be coming back at the end of the school day because when we got off he would be waiting there to walk us back up to the house. He went everywhere with us. 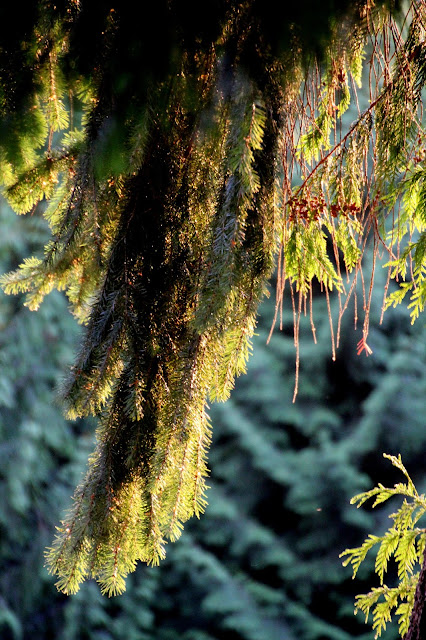 To this day, big cedars bring back strong memories of home. When my dad cleared the land that he grew up on, and that our house now is on, he left many of the big trees. These cedars are some of them. 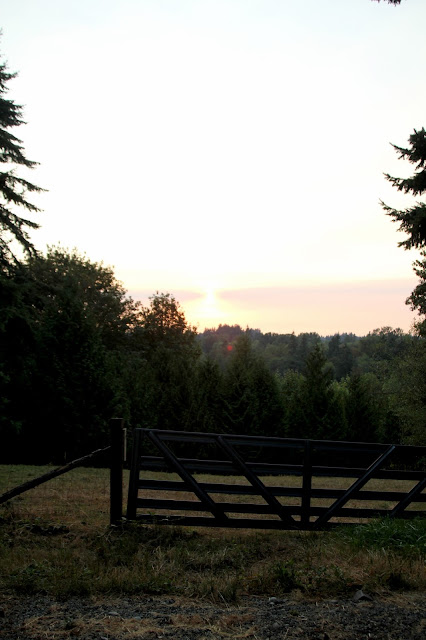 I remember how difficult it was as a kid to open and close this rickety old gate. We drove the old red tractor through it to take hay to the lower shed, we opened it to get escaped sheep back in. This is also the view that I would see if I looked left as I pumped my legs harder and harder, to fly my swing higher and higher, on the wooden big toy my dad built. 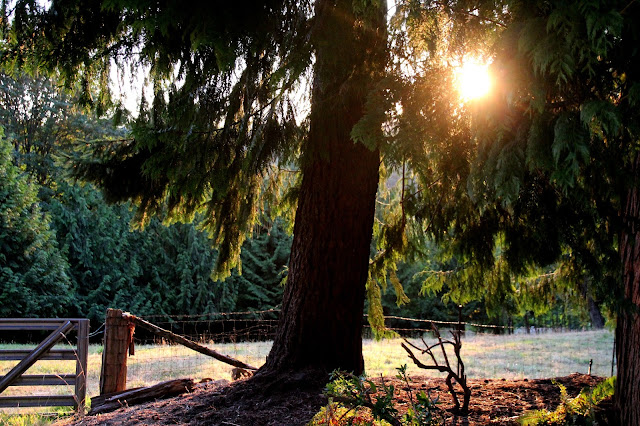 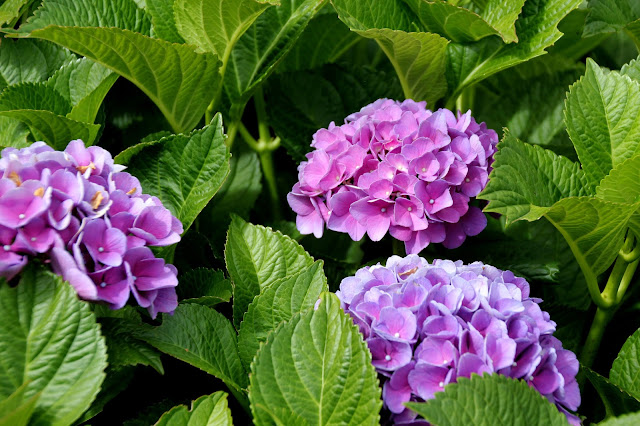 Hydrangeas. They are green (at least the white ones) for the longest time before they turn into their respective lovely colors. As a kid I remember thinking that they were quite plain and drab looking when they were green and wondering why Mom didn't replace them with something showier. I rather like their delicate little blossoms now. 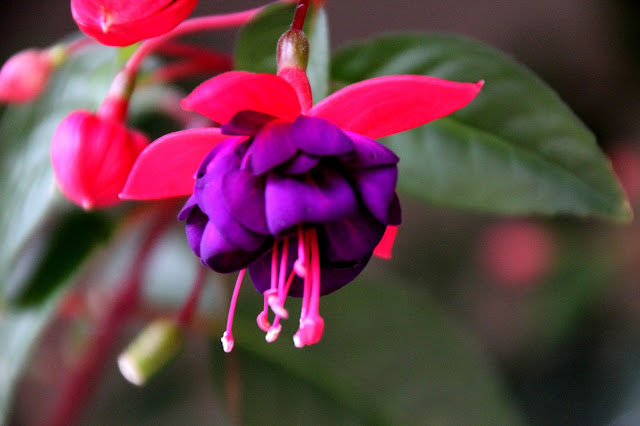 I always forget what these are called (Mom? Sarah? feel free to comment and remind me) but I have always liked them. My Grandma Temus, who lived just on the other side of the apple orchard from us, had them in hanging baskets each summer. I remember how fun it was to pop the buds and how much she would get after us if she caught us. 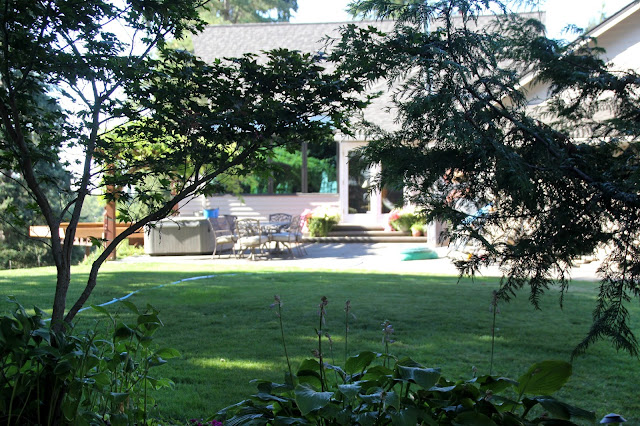 The back of the side of the house as seen from Ian and Cheryl's 5th-wheel. The hot tub is a new addition. Sadly they got that after all the kids had left home. 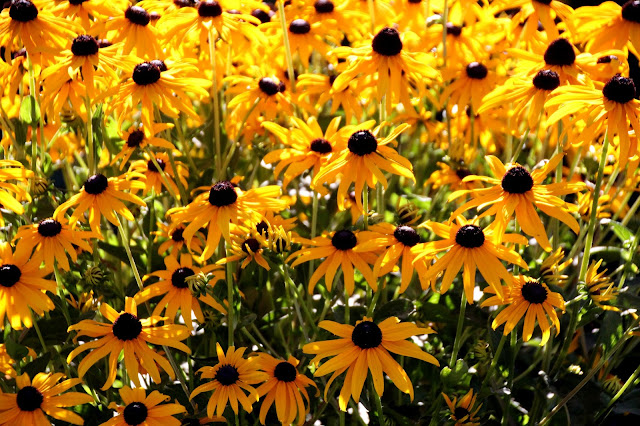 Black-eyed Susan's. Can't have too many of these. I remember how much Mom seemed to enjoy working in her flower garden, thus the flowers bring back happy memories. 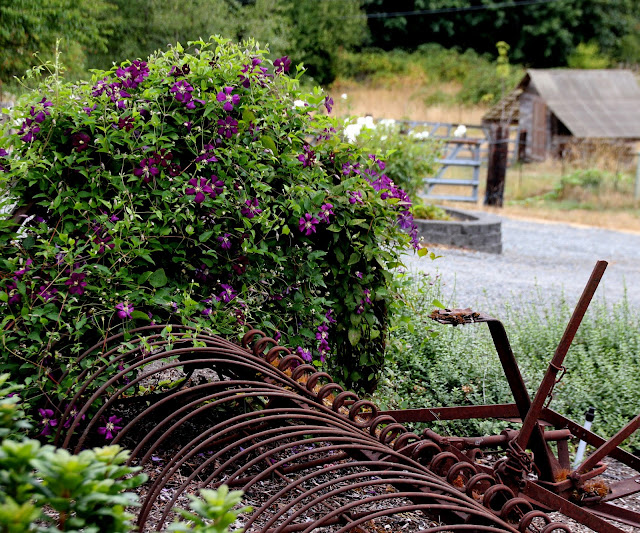 I can't remember a time when this old rusty plow (sorry Dad, I know it was more of a rake attachment thing...) wasn't in this spot. I love it. 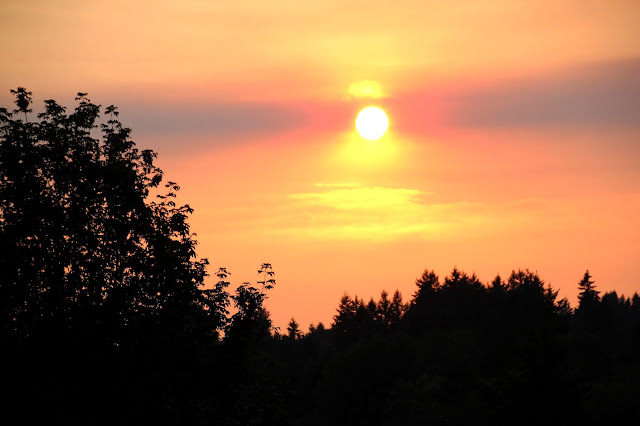 One of my absolute favorite things about home is watching the sunset from the large back windows that face west. Our house was built on the top of a hill and the view of the sunsets are spectacular. 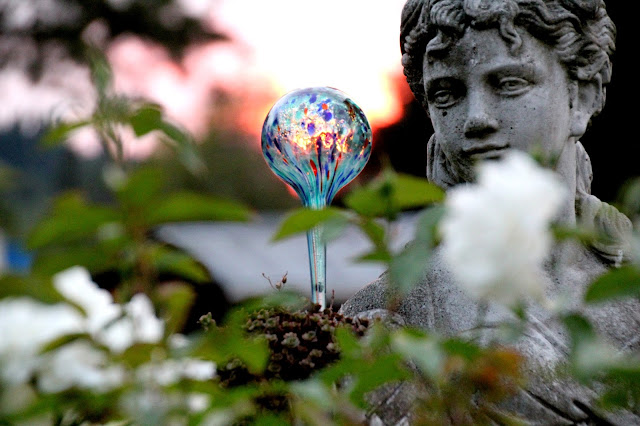 I remember when my mom redid the flower garden circle in the driveway. It was surrounded by rocks before without the statue. The statue took a bit of getting used to at first (especially because it was white when we got it) but the sad part was getting rid of the large flat boulder at the bottom of the circle. It was so much fun to play on. Funny how little things are so important to kids. 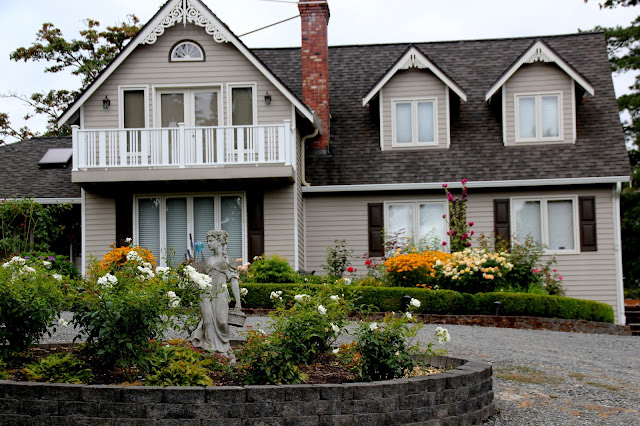 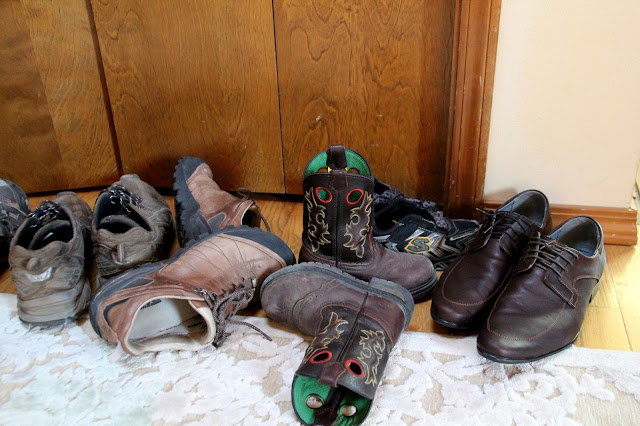 There were always a lot of shoes at the front entry way. I still remember Mom calling us to come pick them up and choose ONE pair to leave. It was a futile effort. 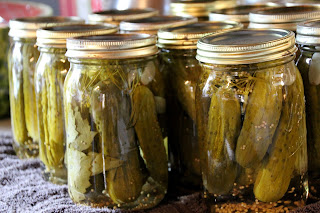 Pickles. Nothing like Mom's pickles. It was Joe's and my job to pick the grape leaves to put in the bottom of the jar. Mom would show us with her hands what size she wanted and the two of us would go down to the garden and pick some. Upon return she would throw out the ones that didn't make the cut, pick out a sample one to send us with and we would go back down. 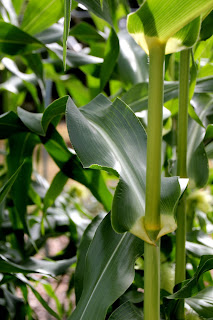 We were each assigned a row or two of corn and other vegetables to weed each Saturday before we could go do anything else. It felt like slave labor often times. But once the corn got big we had a grand time playing in them! Squash and pumpkins. Mmmmm! Each fall we would each pick a pumpkin and haul them up to the house in wheel barrows to be carved. The biggest one, which Dad always would carve (with some input from the rest of us), was always the most exciting one. I think there is a picture of each us as a baby sitting in a carved pumpkin. I don't think any of us are exactly smiling about the situation.

Speaking of autumn. We never got a single trick-or-treater the entire time we lived there. I guess no one was too keen on driving up a long, dark, unfamiliar driveway. 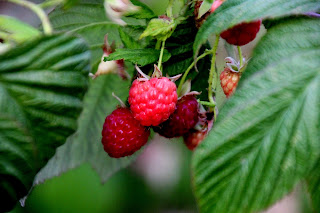 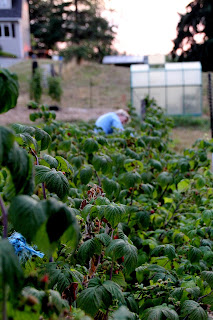 Go down and pick berries. Go back up with bowl only to have Mom tell you that you didn't get enough. Go back down. Repeat. It took a long while, but I am proud to say that I am now quite good at picking raspberries. Hint: there are an awful lot hiding under the leaves.

Pruning and tying raspberry bushes is also where I learned the square-knot. Yup. I was quite proud of that as a child.

A lot has changed over the years, but there is a whole lot that has stayed the same. I didn't have a perfect childhood. No one has. But I am well aware that mine was blessed. Blessed to live where my father was raised. Blessed to have so much freedom to roam. Blessed to grown-up interacting with so many animals. Blessed to have had been raised where work was a requirement in so many ways. (I wouldn't have thought about it that way when I was struggling to carry a 5-gallon bucket of water down to the chicken coup after dark or pruning apple trees.) Blessed with parents who never stopped trying to be the best parents they could be. Blessed to grow-up where, out of necessity almost, my siblings became my best friends. Blessed to have a whole lot of space to be alone to think, cry, look at the stars, talk to God and ponder the big things in life.

I don't write all this to boast about how good I have it, or to show off; but rather to acknowledge and give thanks for the blessings that I have been given and the profound influence they have had on my life.

No matter how many homes I have, or places I live throughout my life, coming back here will always feel like coming home. 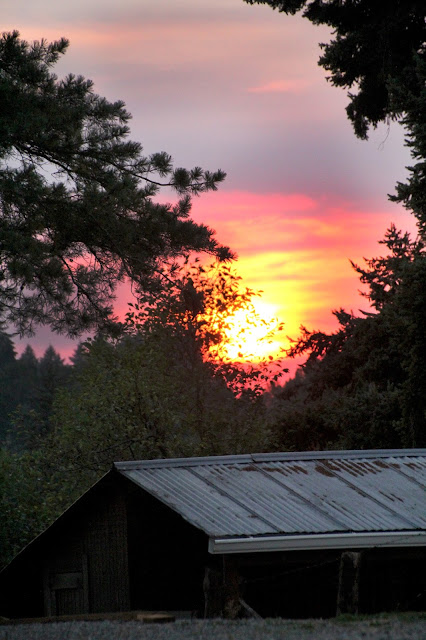 Thank you so much Cheryl for capturing this special place!
Posted by Katie at 11:03 PM

So gorgeous! Loved every single picture. What a blessed childhood! Thank you so much for sharing!

Beautiful job, Katie girl! Thank you for sharing your sweet memories - loved it! :)