Last month I had my first grand-mal since the previous November. Almost made it a year. Missed it by a month. Oh snap.

The partial seizures that I still have 1 to 3 times a week are no fun, but there is absolutely nothing, NOTHING, neat about a grand-mal seizure. Nothing neat about losing control of your own body, not being able to do a single thing about it as it jolts you around, convulsing painfully, smacking you into things, making you come in and out of consciousness only to wake up not being able to move even your little finger. Nope, not neat at all. Even after having several the last few years (side note: they have become MUCH more infrequent, and I have it so much better than others with seizures) they still put me in a deep slump for a few weeks following. I still get a little panicky whenever I sit in the computer desk chair where I was when I had it. It is also where I am sitting now...

This last one was the worst as far as bodily harm goes. (Pretty great that I haven't had any serious injuries with any of them!) I came out of it with a shiner and a very painful shoulder. I had landed on it and couldn't change position at all to alleviate the pain. The first thing I said to the friend who was the first person to get there was to please roll me off this shoulder! The pain was still interrupting my sleep a couple days after the fact so we went in to get it checked out. Mostly I wanted to make sure that there wasn't any serious damage that I would make worse by trying to use it. They took a few x-rays and determined that there weren't any broken bones, just some serious muscle bruising. 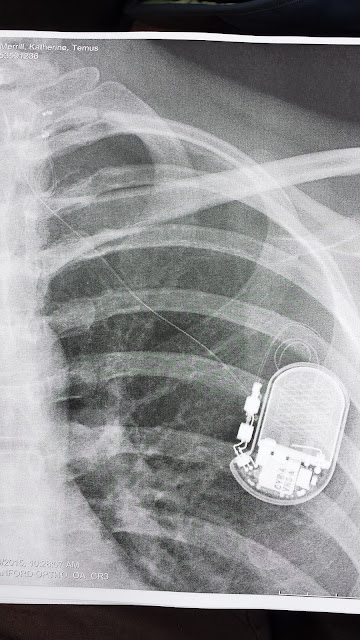 This was one of the x-rays. It features my lovely VNS device. I think it is neat that you can see so much detail in it. It's number, the different parts of the battery, the wire as it loops around making its way up to my vagal nerve and even the little clasps that attach it to the nerve. Pretty neat, huh?

There is still absolutely nothing neat about a grand-mal seizure. I would be quite delighted if I never had another one It was however, neat to see the device that until then I had only felt just under my skin.

Hello VNS.
Nice to finally meet you.
I wish it had been under different circumstances.
We really shouldn't meet like this again.
Ever.
Posted by Katie at 4:31 PM

Becky Clegg and I talked about you yesterday. We know that you can never escape your reality you are in, but we pray for you and your family all of the time. You are a strong lady and I don't even know you that well. Your testimony is an inspiration. Thank you for sharing with us. Janeen Sym

Oh Katie, I don't have the words to express how much we wish these seizures would go away for you. We petition the Lord every day, multiple times a day and we fast for you every month. I'm so sorry that this is still your burden to bear.

We'll continue to pray and fast for you and we'll put the question "why" with the other "why's" we have gathered through this journey of mortality with His peaceful assurance that we will one day know why and will be grateful for His wisdom. We love you!!