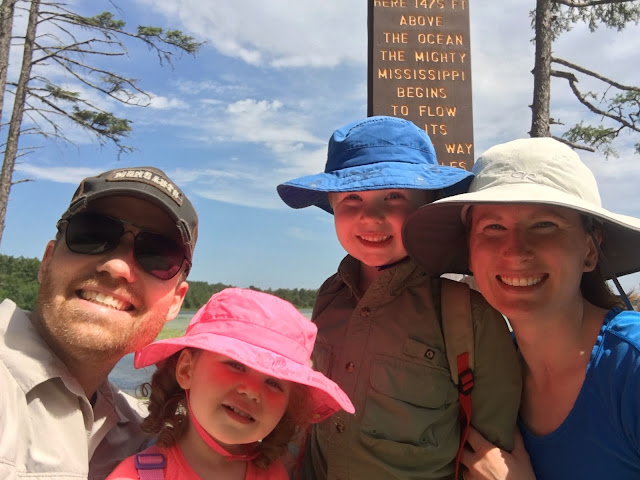 Our very last weekend in Fargo we took a break from all the craziness that is involved with moving, and fulfilled one of the things on my "Fargo Bucket List." We went to Itasca. (So not in Fargo, but much closer than we may ever be again!)

For those history buffs out there, the name "Itasca" was not the original name given by Native Americans in the area (surprise, surprise). The name was coined by the first white man to find it. It is a combination of two Latin words: veritas ("truth") and caput ("head"). There is a contingent that argues that Lake Itasca is not really the actual origin of the Mississippi, that it is one of the several streams that feed the lake. But other famous rivers (i.e. the Nile) follow the same "rule" that the Mississippi does; their official origin is considered a lake, not one of the lake's feeder streams.

Anyway... back to our trip.

We headed out first thing Friday morning (which with little ones means about 9am). Jane fell asleep in the truck and when she woke up we were driving through trees. Driving through trees always makes me feel happy and reminds me of home. Apparently it doesn't have the same affect on Jane. When she woke up and looked around she exclaimed: "I can't see! I can't see! The trees block my way! I can't see!" Keith and I both took that as a sign that it was time to move. ;) 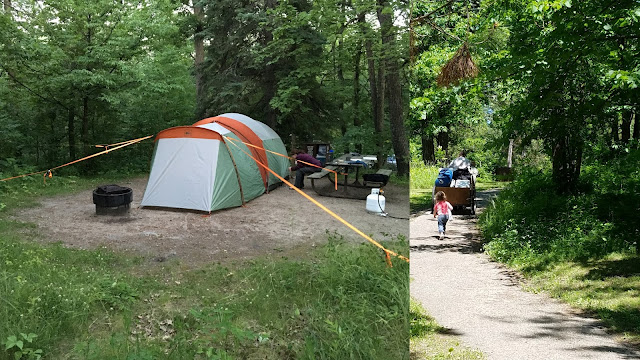 When I had made reservations back in January I had picked a "cart-in" site. I didn't want another camping experience where we are surrounded by RVs and loud generators. Keith was a good sport and pulled the cart back and forth. He has had a lot of experience at pulling handcarts after all.

I admit I hesitated to post the picture on the left of our massive tent. But I figured there is no point in trying to pretend that we camp in a backpacking tent anymore. We have embraced the car camping lifestyle. At least until the kids are old enough to carry a pack. Hehehe  We had seen a weather warning that gave a storm warning for the coming night. Complete with very strong winds. Wanting to be safe rather than sorry, we used the guy-lines that we had but there weren't enough. So not being able to think of anything else, Keith got the bright orange ratchet straps out of the truck. It was a bit redneck but it worked. As fate would have it though, the night was completely calm. I wasn't complaining though.

I have to mention that I can not make a meal while camping and not have flashbacks to when Mom would make super yummy camping meals. I especially remember her laying out bread on the Ford tailgate and putting on sandwich fixings like a factory assembly line. Seven of the best sandwiches I have ever had. She did that countless times on countless family vacations. I didn't really appreciate the effort involved. So thanks Mom. Thanks for making those family trips all the better by your culinary efforts. 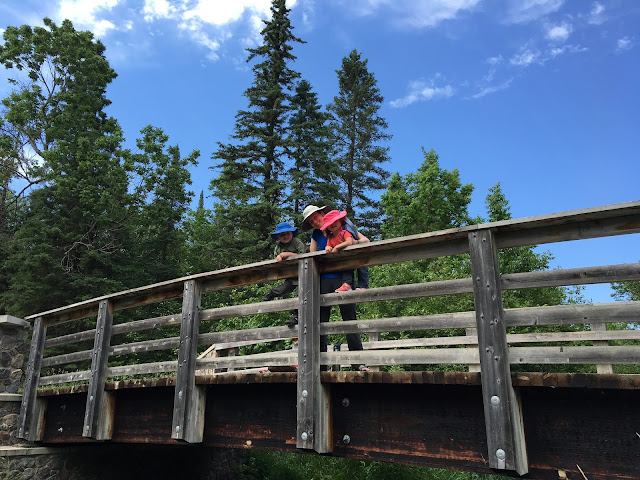 We got camp set up, ate a quick lunch and headed off to the head waters for the rest of the afternoon. Charlie really doesn't like cold water and Jane is adverse to water in general lately so I didn't bring their swimsuits along. I was just hoping for a picture of them wading across without tears. 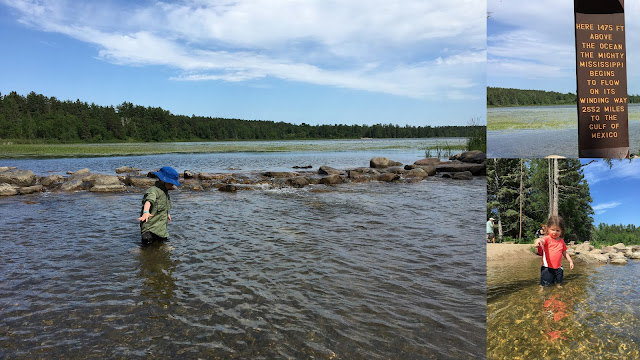 I was wrong. The water was warm and Jane decided that water is okay after all and went right in. By the end they were completely soaked but were all smiles. 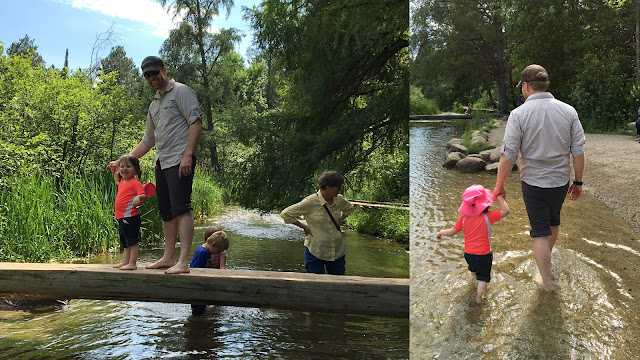 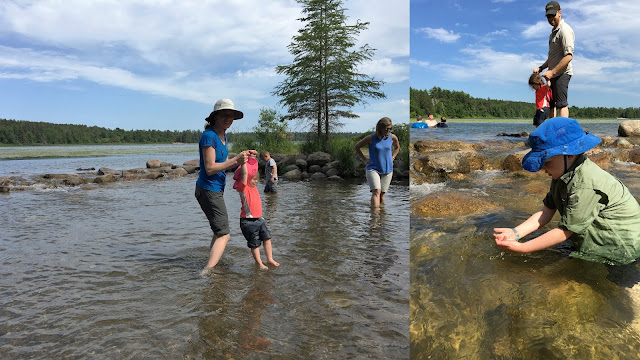 Down the stream just a bit the water narrows considerably and there is a little place to cross there. The current is a bit faster there, so although it would have been neat to take five steps across the Mississippi River, I was a bit worried about the kiddos getting pushed over. They had way more fun wading around right where the river flows out of the lake anyway. Even if they did walk back in wet clothes and wear practically nothing on the short drive back to camp. 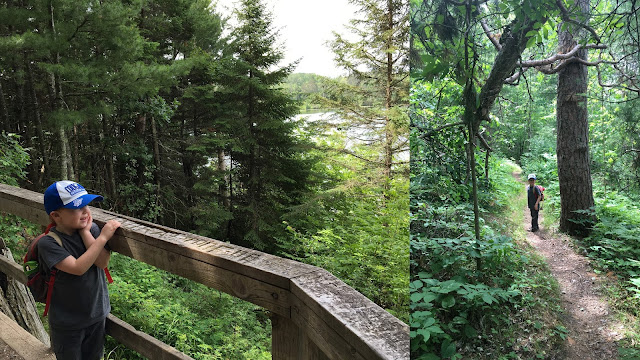 The next day we went on a little hike through the woods. Bliss. We saw squirrels sunbathing on tree limbs over the lake and lovely little flowers that both kids wanted in their hair. Charlie was mesmerized by a mating pair of dragonflies. Of which the female was feasting on the male's head. He seemed to not care about why they were stuck together, but was fascinated to see the one biting the others head off. They let us look fairly closely for quite some time before she flew off to finish her meal in peace. It was probably Charlie's highlight of the hike. 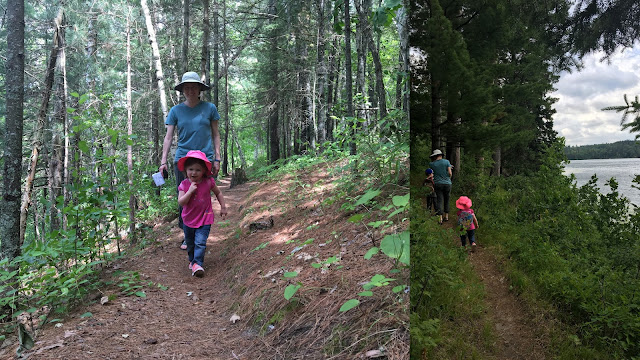 For some reason unknown even to myself, while I was walking behind Jane I starting singing that little diddy from Peter Pan "I'm following the leader, the leader, the leader. I'm following the leader where ever she may go..." (You know the one.) Except instead of "leader" I would say "Jane." Well she liked that a bit more than I thought and before we knew it she and Charlie were arguing about who got to be the "leader." We settled the dispute (somewhat) by having them take turns. We still however, had to listen to that little diddy all the way back. 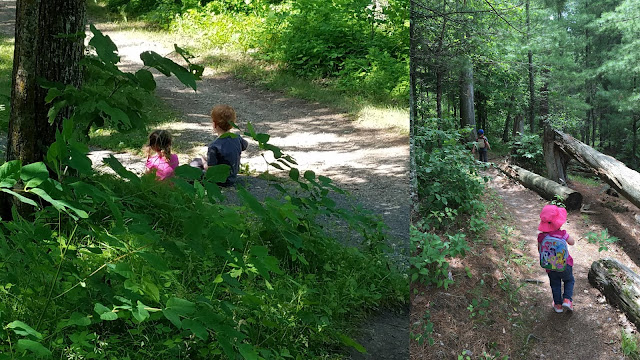 The vast majority of the trip though, Charlie and Jane were best buds. It did my heart good to see them running through trees and bushes together, kissing each others owies better, and having little talks together. Sometimes they fight like cats and dogs, but it makes me feel like we must be doing something right to have kids who generally enjoy spending time together.

Itasca was the little reprieve I needed before moving chaos reached it's peak. It felt good. So very good. In a sense I felt as if I could really breathe for the first time in weeks. It is always hard to pack up and head home from wonderful vacations. This one seemed extra hard because I was returning home just to say good-bye.
Posted by Katie at 10:35 PM

Looks and sounds like a fun trip! We haven't made it to Itasca yet and this really makes me want to go! I'll have to ask Matthew if he knew the female dragonflies eat the male dragonflies--I didn't know that, but he probably does. :)