Near the end of our special bunny experience, Keith discovered another nest. This one wasn't in the ground though, it was underneath the deck. 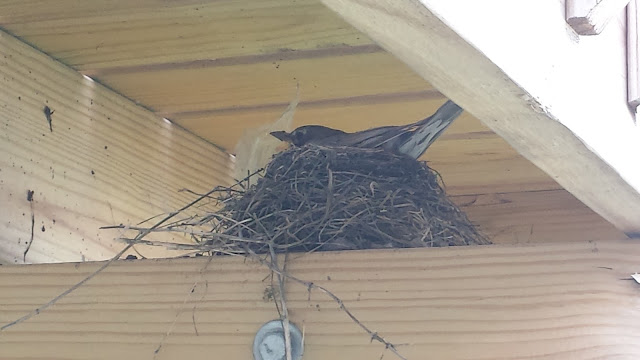 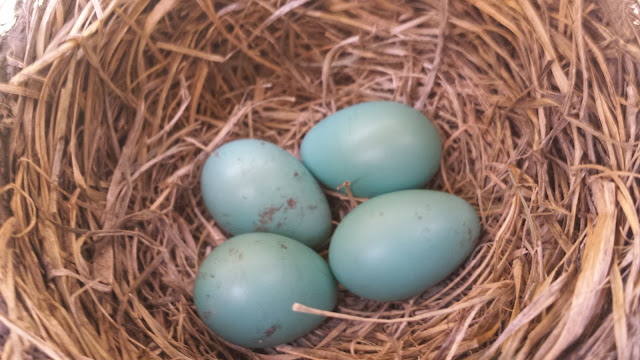 We could watch the babies in the nest by peaking through the spaces between the deck boards. We only have gone under the deck a few times to get a better view because doing so makes mommy and daddy robin mad. They don't seem to mind when we peer through the boards though and it is neat to see the nest from only about 6 inches above it.

When we first found them there were four eggs and the mother sat on them almost around the clock while the father kept guard out in the yard. 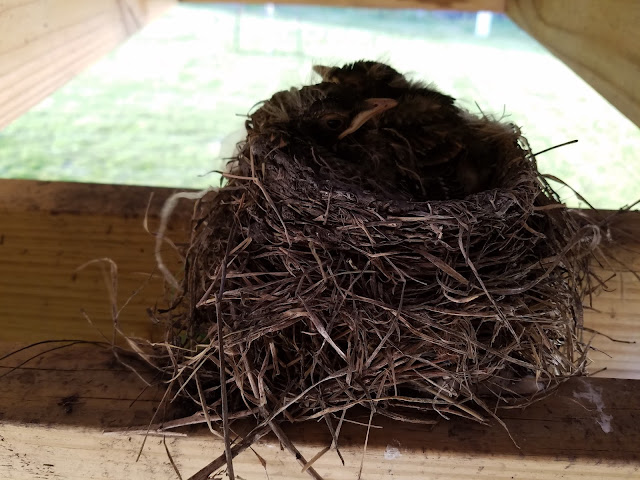 When the eggs hatched there were only three babies. (can you find the third little beak in the picture below?) They kept their parents busy bring them food! We would see them fly back and forth almost constantly to the nest, always leaving one in the yard to watch for trouble. 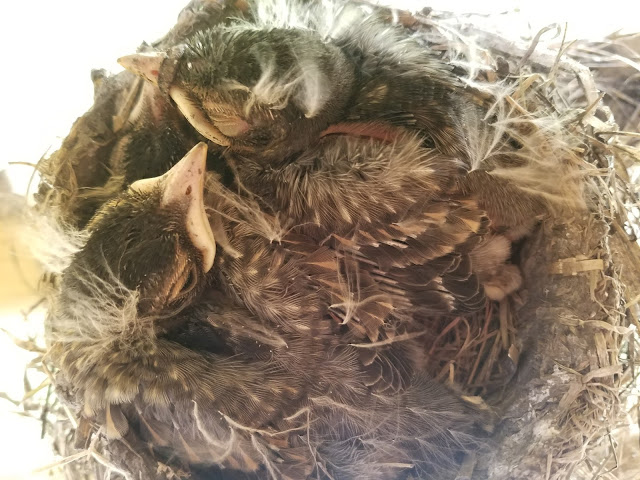 One night, before they left the nest, Keith and I awoke to the sound of pelting rain, powerful wind and loud thunder. It was so loud that I thought a window must have been left open. I went out to the front room to check and Keith soon joined me for a minute to watch the lightening show. When we returned to our bed Keith promptly fell asleep. I laid wide awake worrying about those baby robins. I tossed and turned the rest of the night wondering if they had fallen out of the nest. I had images going through my mind of a cold, wet baby robin laying on the soaked ground. What if the whole nest had blown down?!? I tried to remember if there was a board at the far end of the deck that would at least block some of the wind. In my half sleep, half awake state I couldn't remember. I thought ever once in a while that maybe I should brave the storm and go check on them. I reasoned that it wouldn't do any good anyway. 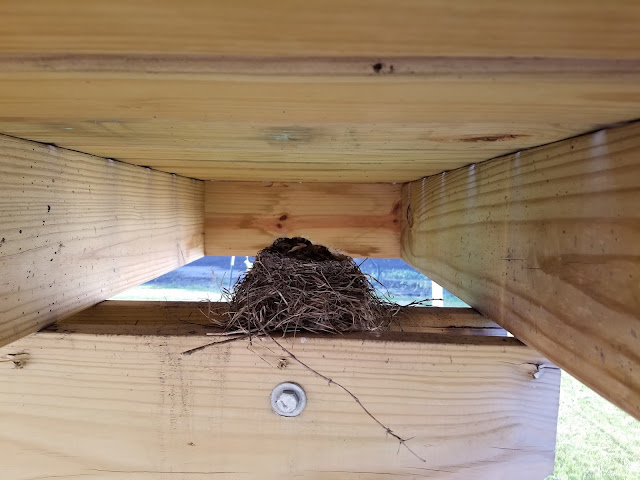 I was incredibly relieved to see the next morning that they had weathered the night's storm perfectly well. Whew.

That was almost the last of the drama. A few days later we noticed there were only two in the nest.  One had fallen/gotten pushed out of the nest and had died on the grass below. :(

They have since left the nest but still spend the majority of the day hanging out in the backyard learning how to find food and how to fly. It is cute and comical to watch them from the windows hoping after their parents, randomly pecking at the grass and chirping constantly. Just earlier this evening Keith and I watched one follow it's father to the top of the neighbor's roof and slide a bit on the landing. It is fun to watch them "learn" to be robins. Jane still loves spotting the robins from the window and waving to them from the deck as she has since they first arrived. It has been fun to see the whole thing play out in our own backyard. From building the nest to leaving it.

I absolutely love spring!
Posted by Katie at 10:03 PM