As some of you already know, I began radiation treatments three weeks ago. (Chemo will follow.) As you can imagine, this was not a decision that was easily made.

When we first moved here we met with Dr. Kim, my new neuro-oncologist. Access to a more comprehensive cancer team was one of the reasons that made me want to come here in the first place. After going through my medical history with him, he said it sounded like I should see a neurologist. I told him that I had wanted a neuro-oncologist so that I could start doing more to actually get the tumor to go away in the hope that by doing that the seizures would go away. He agreed that that was a good possibility and asked if he could present my case before a group of specialists the following Monday. Apparently every Monday night a group of doctors, within any specialty dealing with brain cancer, meet to discuss various cases. (That sounds both dull and fascinating all at the same time.) So the following Tuesday afternoon I got a call saying that the unanimous recommendation was radiation followed by a mild form of chemo. Well, related to other forms of chemo that is. Also, the genetic makeup of my particular tumor makes it respond well to radiation and chemo. it is also a low-grade tumor now but it has a high probability of getting really nasty in the future. It only makes sense to treat it now when we don't have to be really aggressive with it.

My reaction to that news was mixed. One the one hand I was scared. Who wouldn't be? On the other hand it felt so good and so right to finally be doing something really proactive about the tumor. (I feel that I should acknowledge here that there are other treatments termed "alternative" that people are proactive as well, and I don't deny their worth. All that I feel to say about that on this blog is that for me, at this time, I feel that it is appropriate to utilize some of those as complimentary to my radiation and chemotherapy.) It also was comforting to know that this was not a recommendation made by one doctor. It was made by a room of doctors from several backgrounds. More than that though, I have had two very real sacred experiences that told me, without a doubt, that these seizures would not last my entire life. That promise has given me hope and that hope has given me the motivation to continue to search for a cure even when doctors say that, because none of the seizures meds have worked, the goal is to simply improve my quality of life with the seizures.

There are pros and cons to radiation, specifically my kind of radiation.

Cons:
-extreme tiredness. By the latter part of the week, for me to be a functional human, it is crucial that I take about a two hour nap in the afternoon. And I still sleep through the night just fine.

-my brain doesn't work as well as it did before radiation (and that was worse than before the seizure meds). People joke about being forgetful and not remembering a particular word, or why they walked into a room, or having a conversation about something. But these are things that happen multiple times a day, everyday. When there are beams of radiation passing through your brain tissue, no matter how small and focused they are, they still do some damage. On the plus side, I am young and, with proper care, brains can heal from relatively small injuries as this. Basically, this shouldn't be long term.

-you get dizzy at times.

-you get headaches at times.

-your hair falls out, temporarily, in patches where the majority of the radiation enters your head. (whimper) 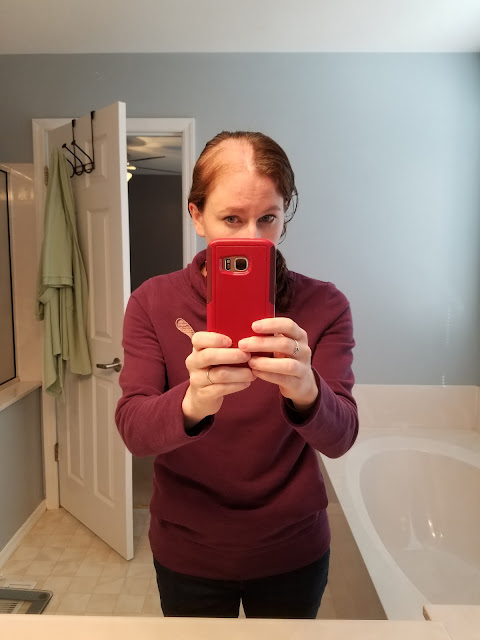 Luckily it is becoming hat weather... And even if I become one of the rare cases where it doesn't grow back, I would much rather go through life without hair and without seizures than the other way around. If that was the sacrifice I had to make to live the rest of my life without seizures and all that that brings with it, well I would just buy a lot of hats. (You generally need one anyway when climbing mountains. ;) )

-and your scalp itches. A lot. Hooray for aloe vera mixed with lavender oil!

Pros:
-your extra wonderful mother and mother-in-law, come to help you out and you get to have fun times that you wouldn't have if you didn't have someone to drive you around. Seriously, this as been the second greatest blessing of the whole radiation thing.

So what is the best thing you ask? Well I will tell you...

you may just set a new record for the longest time you have ever gone without seizures!!!!!
(That is the largest I could make the font.)

That includes post-surgery periods. As of today I have gone 18 days without even the tiniest of seizures. 18 whole days. Over two weeks.

What if I have had my very last seizure.

I don't hardly dare to think of that possibility...
Posted by Katie at 5:45 PM

Congratulations on 18 days! So grateful you have found a team to be proactive with on your tumor.

Wow, Katie! Wow! I had no idea that you were going through all this. I am so grateful that you have help and support. We will be praying that you have had your last seizure ever.

Hooray! That is wonderful news. Unprompted by me, Sam included in his prayer the other day that you would get better soon. Love you!

Woohoo!!! I'd trade hair for seizures too! Love you buckets full!! <3

You're at eighteen? Going on nineteen!
Night is turning to day.
A new horizon to fix your eyes on,
Is coming to light the way :D

I love so much about you. The way you communicate has always been exceptional and impressive. Your testimony has strengthened me time and time again. This procedure seems to be doing great things, minus the hair loss and forgetfulness of course. So grateful you came into my life for a season. May God continue to keep and bless you and your sweet family. Love Sue B.

What a blessing for you and your family. May this all be grandly
successful for you.

So happy to hear the positive update! We are praying it continues to go well.

You are an inspiration to us all! Keep up the fight!

See you next week darlin. Love you ever so much and so proud of you!!