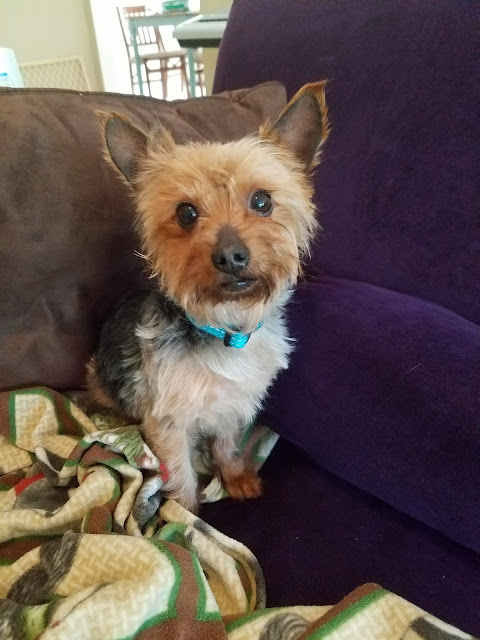 Last month God gave us a dog. That really is the best way to explain it because it just can't be a coincidence. 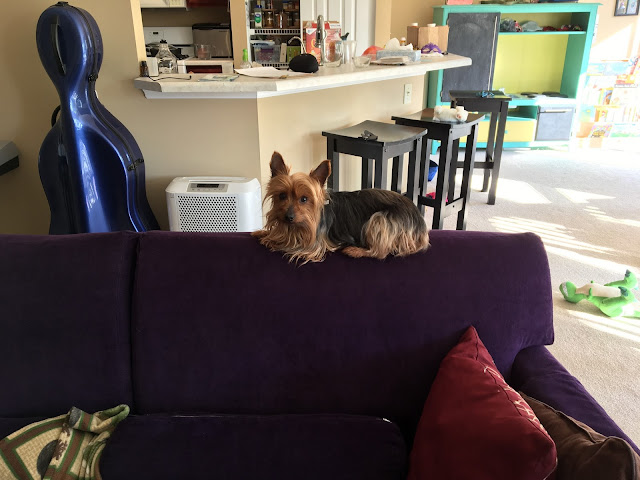 One Friday night the neighbors heard her barking and whining outside. When they went out to check they found a drenched little Yorkie with thorns in her over-grown tangled fur. They pulled the thorns from her fur and gave her two baths. She had no collar so she was taken to the vet to be scanned for a chip but there wasn't one. While she was there the vet trimmed her painfully over-grown nails. 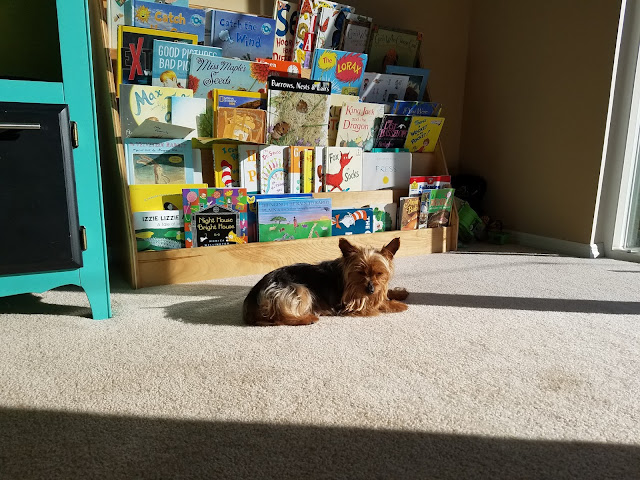 The neighbor's kids took her around the neighborhood asking about her. They put up signs and posted her picture on Facebook all in a fruitless attempt to find her owner. There was one big problem. Although our neighbor is an animal person, her husband is not. At all. He left for work that morning making it perfectly clear that he didn't want that dog to be there when he got home.

That is where we enter the story. It was a Saturday and we were just heading out for a community event when we saw our next-door neighbor with her kids carrying a rather disheveled looking pup. We stop, she tells us the story, we offer to care for the dog until the owner is found. Keith and I both hoped that the kids...er...me... I mean us... wouldn't get too attached before then. 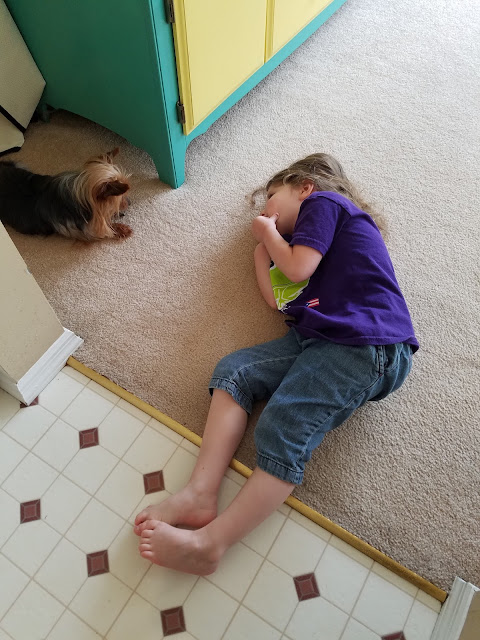 The poor dear was terrified for the first couple of days. It didn't help that Charlie and Jane were so excited about having a dog that they were all over her. We sat them down and walked through what we knew of her story with them. We talked about how scary it must be for her. After that they were better about giving her space and being gentle and slow around her, but they are kids so it was really hard for them. She warmed up pretty quickly though and after two days I was starting to feel guilty for hoping that her owners never called so she could be ours forever.

The day the neighborhood signs came down and we went and bought her a collar with a tag that said Molly Merrill, I just kept on thinking that it was just too good to be true.

Here's why I thought that and why I say God sent her to us.

We have wanted a dog for quite a while now but I didn't want to have to train a puppy, especially potty training, while undergoing cancer treatments. Molly is, according to the vet's estimate, about 2-3 years old. She is completely potty trained, super mellow and doesn't chew on anything. 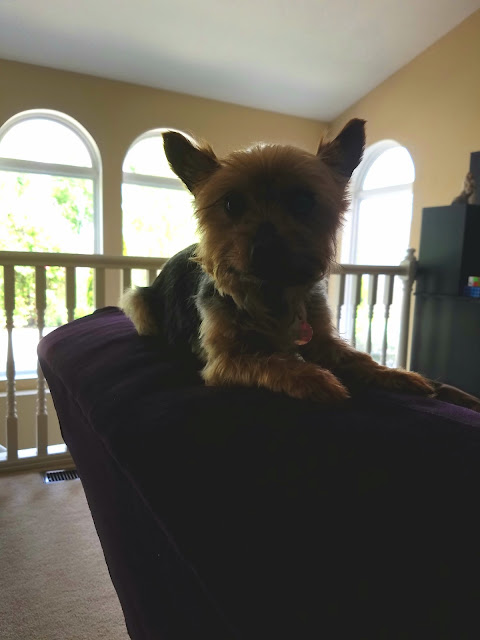 We also wanted a small dog that would work well in the house. Check. Keith and I both have some allergies to dogs, nothing severe but enough that we wanted a dog that wouldn't bother our allergies. Yorkies are very allergy-friendly dogs. Also they don't shed any more than a person. Instead of having fur that constantly sheds they have "hair" that is much like human hair. It just keeps on growing. That means that she requires a bit more grooming than your average dog but that is okay with me.

Pretty much if almost any other dog had showed up that night and the owner never came forth we would have had to just given it to the shelter and prayed that she would find a good home before it was too late. 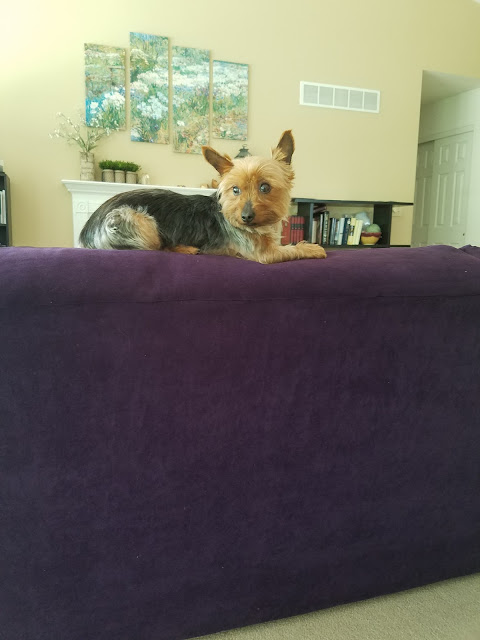 And then there was the timing. I had just returned home from my wonderful Sisters Trip less than a week before. The month or so prior to that trip had been a nightmare. A string of heart-breaking events followed by physically and emotionally painful decisions. I was mad at God. Through the tumor and the seizures I had never felt completely let down by God. He would some how always reassure me that he was there. But not now. Now, it felt like He had just left me hanging.

I am sorry for being so vague. As a general rule I try to not bring up things on this blog that I don't feel comfortable telling the public about. I am breaking that rule this time because I want to somehow explain what I mean when I say that God gave us Molly.

My mom says that God has always spoken to me through animals. As I have thought back over my life I find that to be true for the most part. It is His unique way of letting me know He is there and aware of me. He used a mouse to show me he hears and answers my prayers. He used birds to reassure me of His love when I was pregnant and having several seizures every day.

And now He has comforted me by sending me Molly. I just have the strongest impression that, through Molly, He is letting me know that He was there during those terrible, heart-wrenching weeks. Even when I was mad at him.

She will forever be my constant reminder that God loves me and never truly forsakes us. 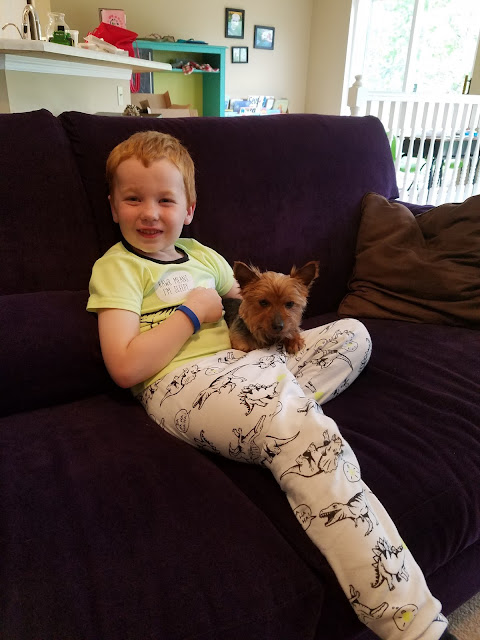 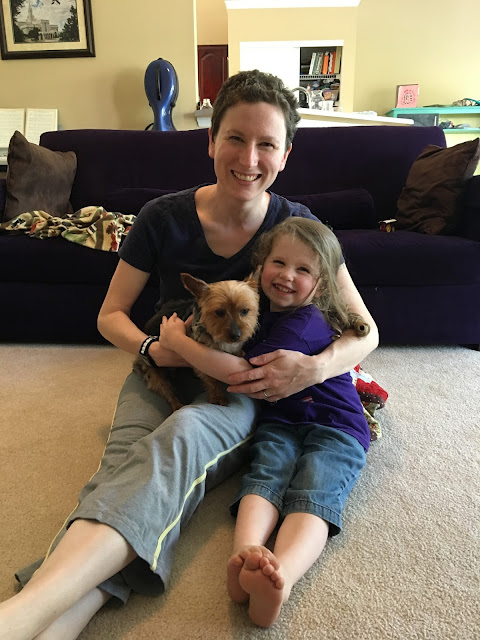 Oh Katie, I'm so happy for you I'm crying tears of joy. You are forever in God's constant care. Tender mercies. I love you

You are blessed. She is a doll.