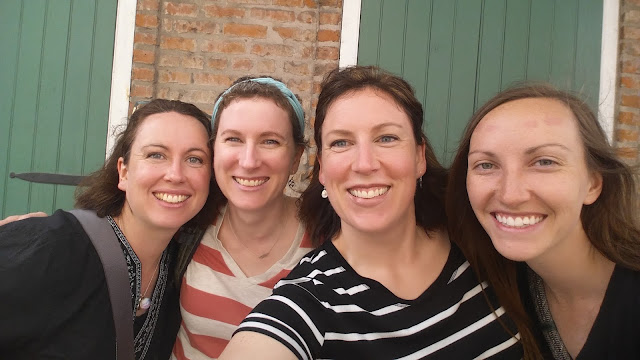 Way back in April my sisters and I met up for a long anticipated get-away in New Orleans... without the kids. :) Why New Orleans? Well that is a question with a long answer, but basically we all live in different states and wanted to go someplace fun and exciting so New Orleans it was.

It did not disappoint. 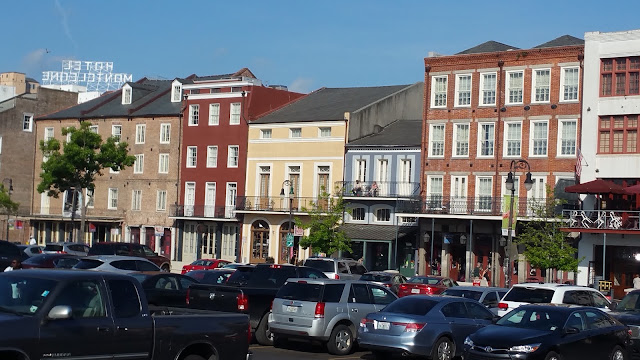 All but one of the nights we stayed in this cute little hotel (the red one) right in the French Quarter. That way most of the things we wanted to do/see would be within walking distance. It may not look like much from the street, but the room was full of old New Orleans character and there was a lovely little courtyard in the middle. It was a store/bakery at one point and was a combination of various different buildings so the inside was a bit of a maze of stairways and halls. 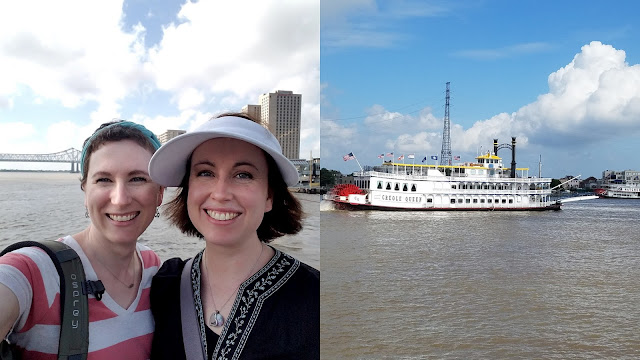 Our first morning Sarah really wanted to take a ferry across the Mississippi. So we did. It was short but fun. Seconds after the picture on the left was taken, Sarah's white visor got swept up in the wind and into the muddy Mississippi. We sadly watched it churn around in the water behind the ferry before it went under and began it's trip out to sea. 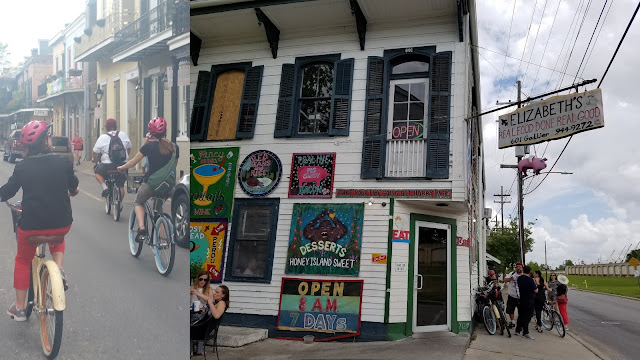 Everyone who ever goes to New Orleans absolutely MUST go on a culinary bike tour (in my opinion). It was delicious and so much fun. We followed a true local foodie around town to some of the most unique and best restaurants in town. This guy was legit. It was obvious that the history of New Orleans and it's food was his passion. It was fascinating! 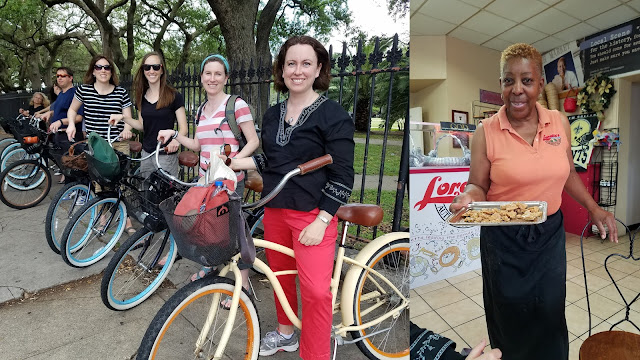 We went to three savory places and one sweet. The sweet place was Loretta's. She makes truly amazing pralines and beignets (among other tasty things). She also makes a beignet filled with melted pralines inside. Those have now been added to my list of foods that I am pretty certain we will eat in heaven. Mmmmm. 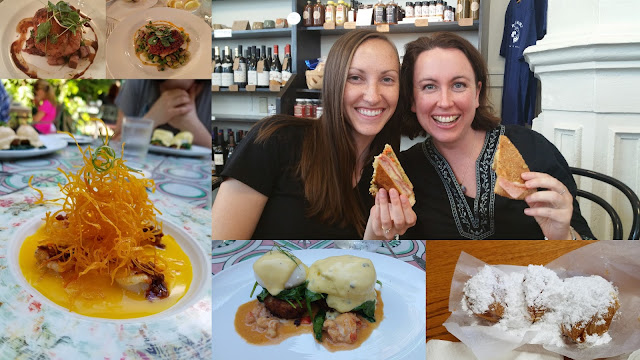 Wonderful and unique food was a definitely highlight of the trip (it is New Orleans after all). The muffalatas in New Orleans are crave worthy and I realized that fried green tomatoes can be delicious. I can't remember details about the other delectable things we ate, but Sarah at one point said that every bite in New Orleans should be an experience and that was pretty close to the truth. 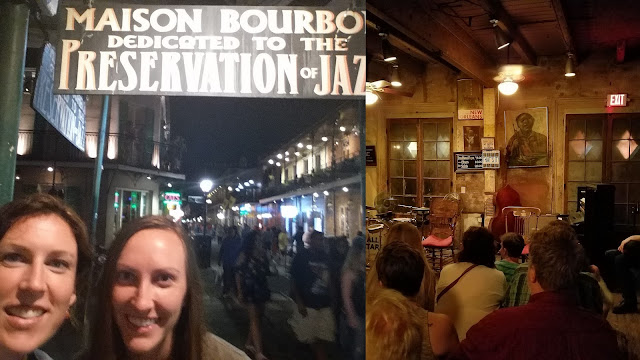 Another thing that New Orleans is known for is jazz. Lots of jazz. I am not a jazz buff but listening to old-time jazz at Preservation Hall was fun. The mission of Preservation Hall is to preserve the more original jazz style and experience. We sat in a cozy room on the floor or simple wood benches and the people in the back stood. It was a surprisingly enjoyable experience. 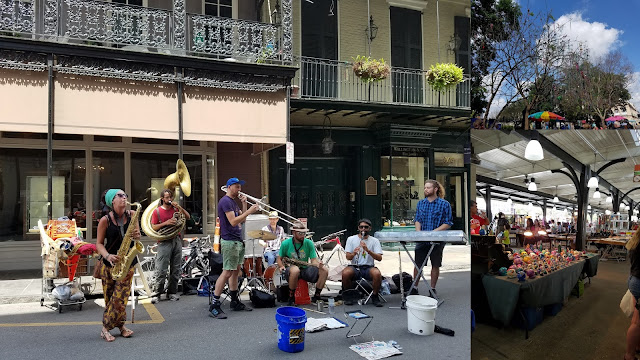 The street bands were a lot of fun too. This gal was belting it out on that sax. You go girl! Also pictured are trees still dripping with Mardi Gras beads and a large street market of sorts that sold quite the assortment of things. 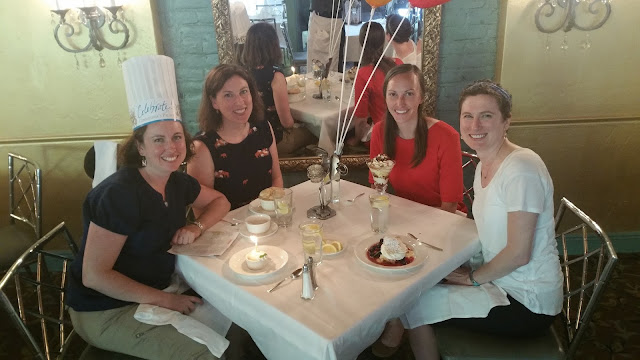 Sarah wasn't able to have much of a birthday celebration earlier that month so Liz told the staff at this fancy restaurant (who's name escapes me) that it was her birthday. There were balloons at the table and at the end of the meal they brought her a dessert with a candle and a birthday hat. 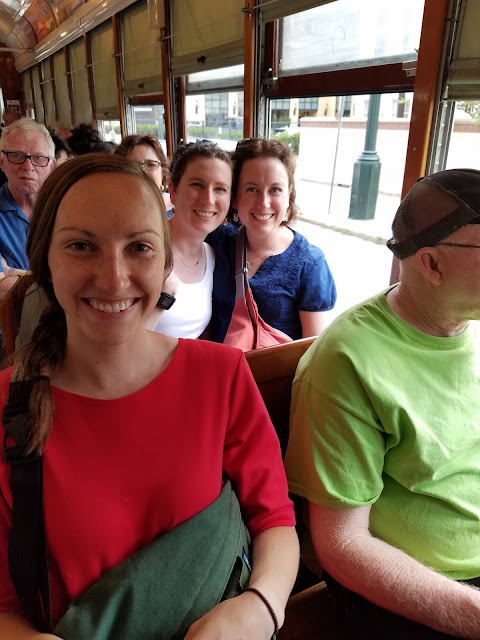 Riding the street car back from lunch and a stroll around the Garden District. 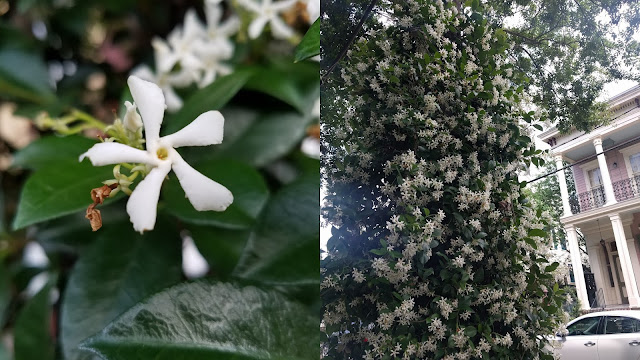 Jasmine was all over and it smelled divine. I had to get an up-close shot of the lovely and unusual petals. I have never seen a flower with petals like that. 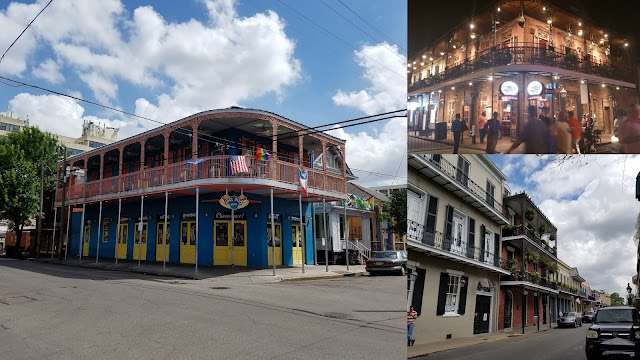 Gotta love the fun and beautiful buildings of New Orleans. Another fun thing about the bicycle tour was going to these out of the way restaurants via bike on side streets. I didn't get any pictures of those, but the homes that aren't in touristy areas are fun too. 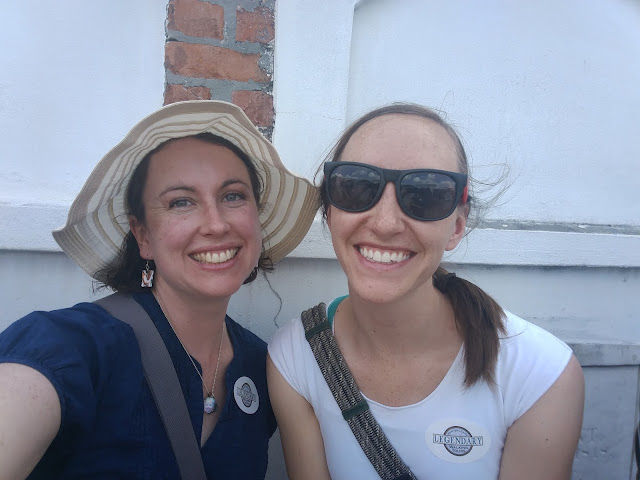 Another tour we did was a city tour combined with a cemetery tour. Some of the older cemeteries are quite interesting but you are only allowed in if you are with an authorized tour guide. 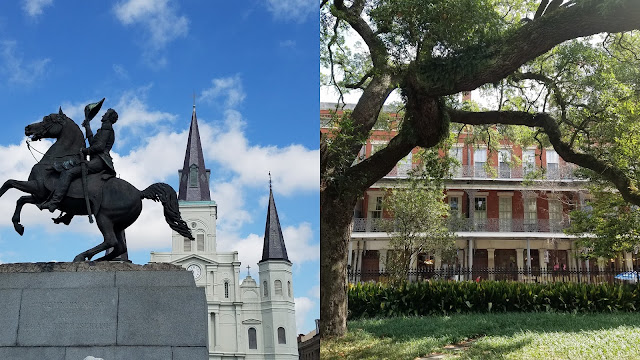 At the center of the French Quarter is this pretty square. It is surrounded by identical buildings on either side, a cathedral on one side and the street on the fourth. The square was purchased from the lady who owned/bought the two identical buildings. She was rich and had a very interesting story that I would totally botch if I tried to remember it. I do recall that after her husband died she spent some time as Jefferson's guest in the White House. Hence the statue in the center of the square. My favorite part of the statue was the tiny sparrow perched on the handle of Jefferson's sword just taking in the view. 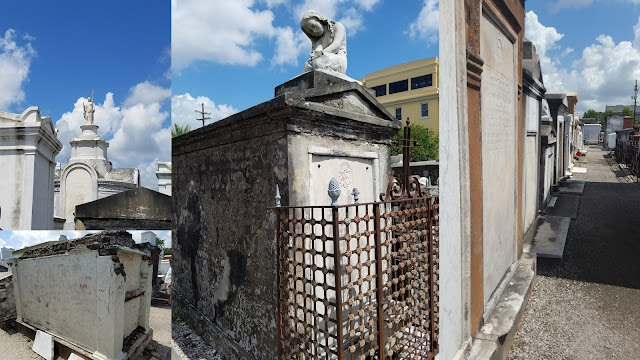 The crypt on the bottom left is one of the three that is thought to be where the remains of the Voodoo Queen are (woooh...). 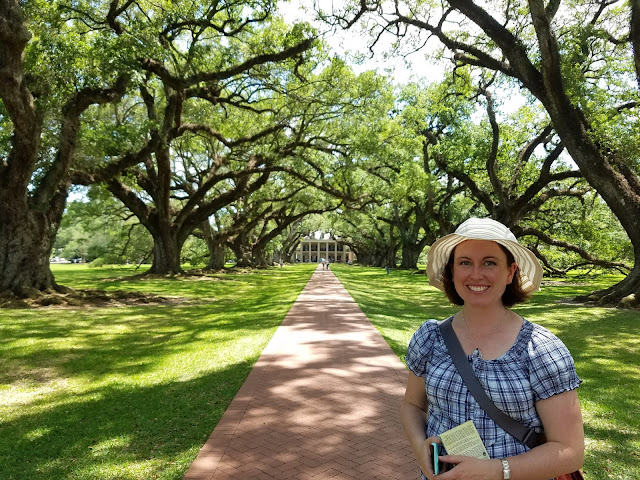 There were a few plantations that we would have liked to see but we only had time for one, Oak Alley. 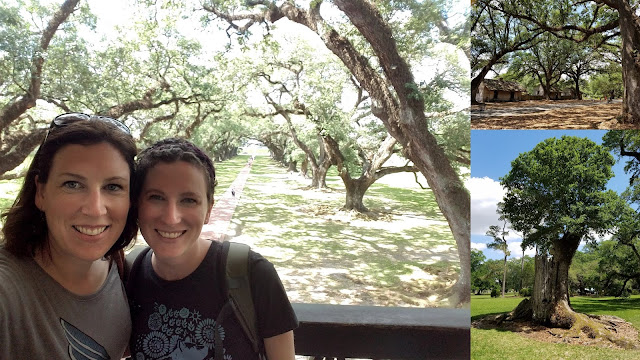 We walked through the recreated slave quarters and toured the large house complete with a balcony with a great view of the oak alley. The oaks were planted more than 100 years before the plantation existed. One of the oaks looked it had been at one point split down the middle and the large crack had been filled with bricks and mortar (lower right picture). I was really confused. I asked an employee about it and it had been hit by lightening and split back when the plantation was still operational. They tried to save the tree by patching it up with bricks and concrete. Of course that doomed the other half so all that is left today is a fraction of the tree attached to a small brick wall. It left me wondering what things we are doing today that will leave people decades in the future wondering what on earth we were thinking.

Another neat factoid about this plantation is that an enslaved gardener here was the first to successfully graft a pecan tree, which in turn, created a new variety of pecan. The Centennial pecan. It had a shell thin enough to allow it to be cracked by hand. 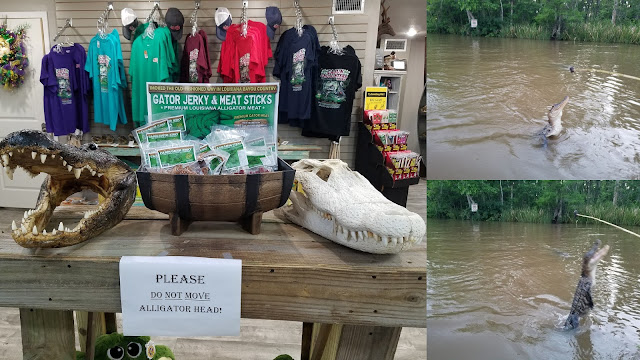 We drove from the plantation to where we had made reservations for a swamp tour. We didn't make it in time for the day-time tour we had planned on, but were able to catch the next one which was a night tour. The gator head with the skin still attached in the picture above sells for about $300. Imagine then how much an entire large alligator would sell for and you will understand why there are very few large alligators left in these swamps. The guide would tap the water with a stick, mimicking something moving in the water, to lure gators close to the boat. He would then put a piece of alligator food on the end of the stick and make them jump for it. 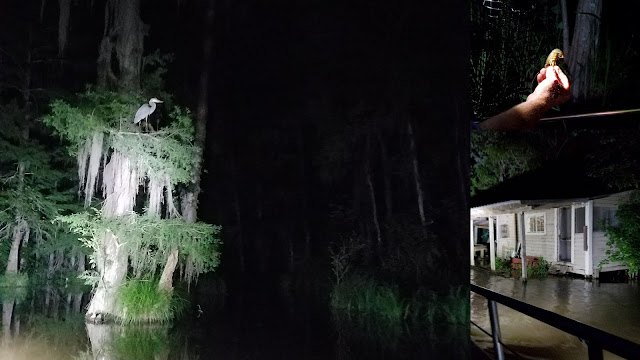 A heron nesting down for the night, a craw-fish, and an abandoned house. For one stretch of the swamp there were several houses on stilts, some abandoned but most inhabited but only reachable by boat. According to the guide, the swells made by Katrina went well over the tops of these homes. 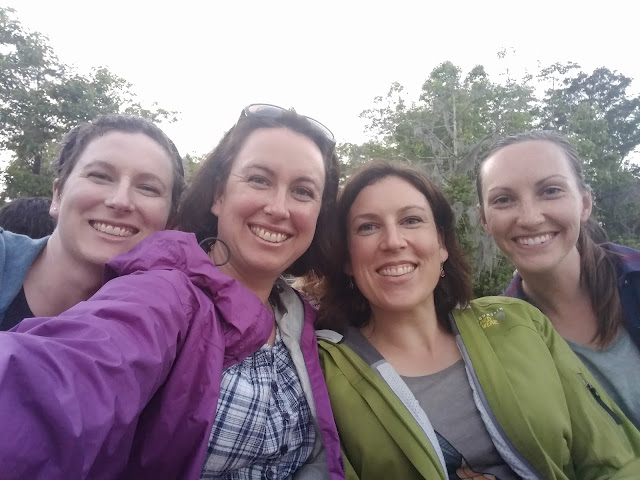 The next day was Saturday and one by one we flew off to our homes. It was such a wonderful time!

Let's do it again soon sisters!

Foot note: At a park on this trip I saw a black-bellied whistling duck. Number 152 on my bird list. It is really pretty so you should look it up. ;)

What an incredible trip! You guys know how to explore a city. I'm glad you had fun.

Awesome trip report Katie, Kate!! Sure love my girls and their "bump of curiosity" as Grandma Temus would say.