Ever since last Halloween Charlie had wanted to be an octopus and Jane a cat (just like she was that Halloween). Month after month the whole year round it never changed. So October comes and I ask Charlie what color of octopus he wants to be. Turns out that he didn't want to be any old octopus. No, he wanted to be his favorite animal, the Pacific Mimic Octopus. This octopus changes color, shape and texture to camouflage which apparently was why he wanted to be it for Halloween. When I told him that it just wasn't going to work for me to make him a shape-shifting, color-changing octopus costume, he reluctantly decided to settle for his second favorite, the Mexican Red-kneed Tarantula. It was easier than his previous request so I agreed. (As a side note: it was surprisingly easier to change his mind this year than it was the year when he was bound and determined to be one of those baboons with the red bottoms that he saw at the zoo. He thought the red butts were awesome and could not comprehend why on earth I wouldn't let him go as one.)

Jane wanted to wear the same "costume" as last year. It was pink sweat pants with a pink jacket that had a cat face on it. Not really a costume but she sure loved it! Unfortunately she had grown out of it. Jane was crushed. So we went to Walmart to see what we could find. We first went to see if there were any cat costumes still available. There weren't and I was starting to dread the idea of making two costumes, when we turned down an isle of princess costumes and Jane exclaimed that she wanted to be Rapunzel for Halloween. Done. One french braid with flowers, dress and she was Rapunzel. 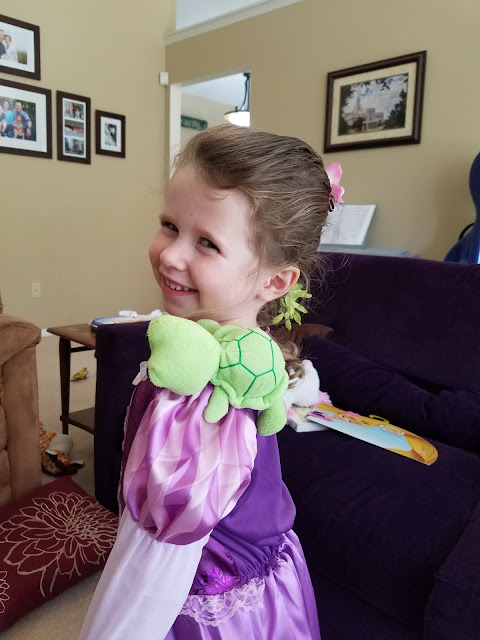 The turtle is subbing for Pascal, her chameleon. 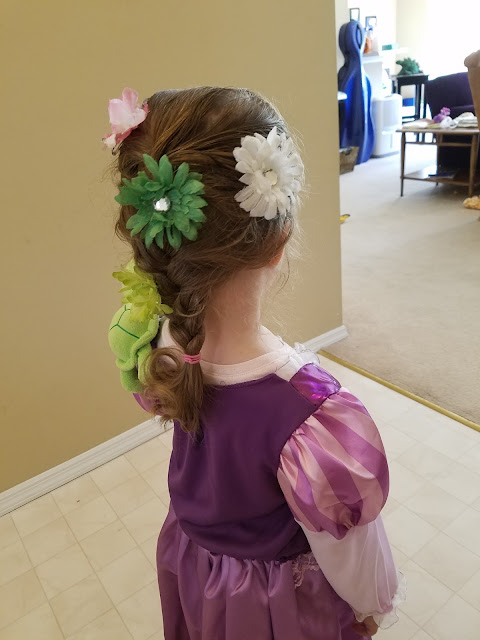 I was pretty proud of my french braiding skills. 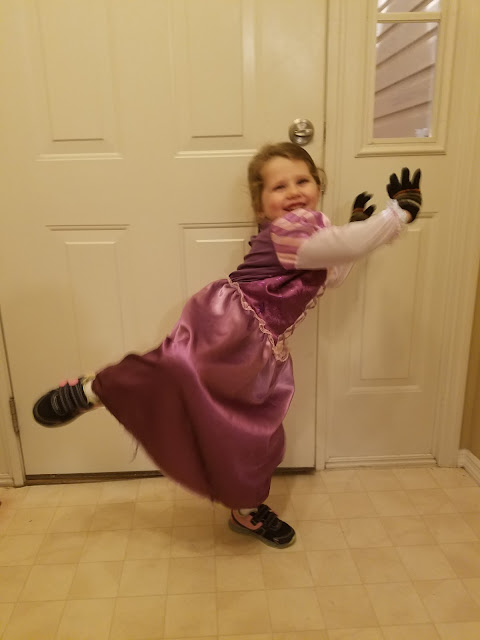 Armed with a photo of a Mexican Red-kneed Trantula and materials to make one, I spent the next several evenings watching shows and sewing (I don't have a sewing machine so it was done by hand). It was a labor of love but seeing his face light up when he saw it made it all worth while. 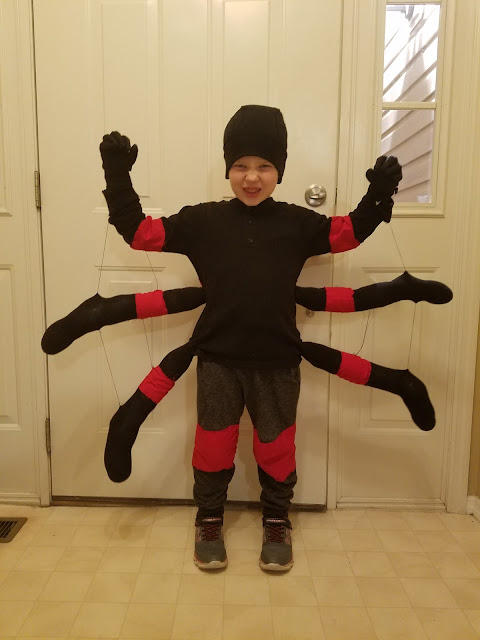 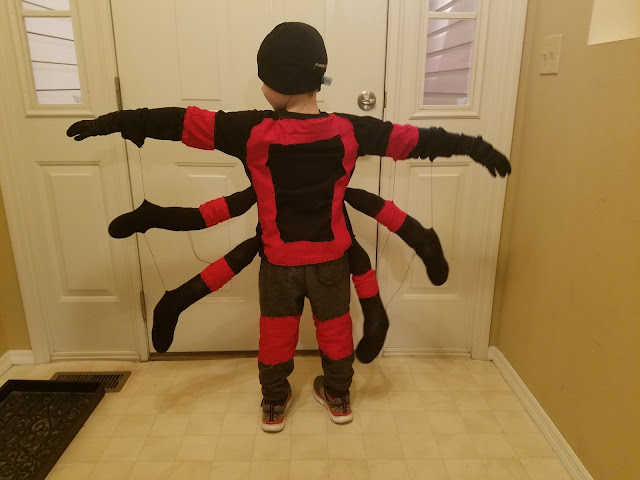 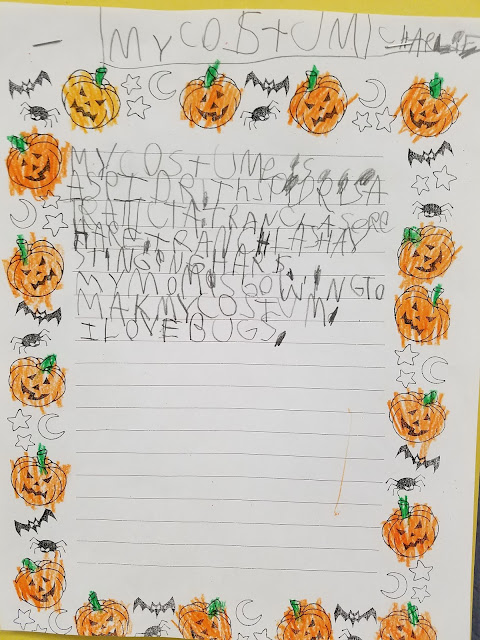 One day Charlie's class wrote what they were each going to be for Halloween. In case you are rusty on your "reading 6-year old writing without spaces"skills, here is a translation: "My costume is a spider. The spider is a tarantula. Tarantulas are hairy. Tarantulas have stinging hairs. My mom is making my costume. I love bugs." 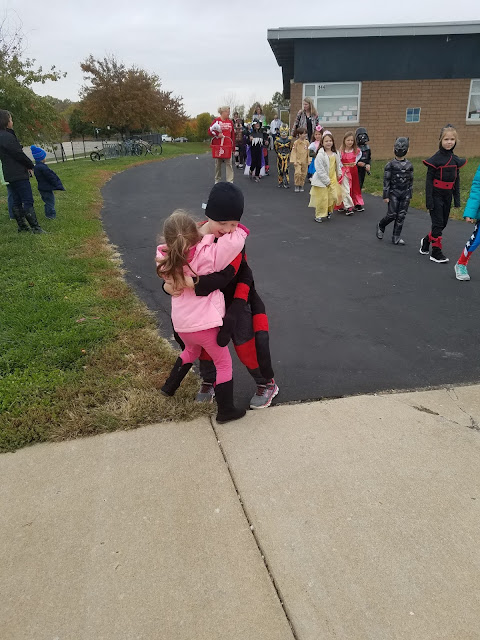 His school also had a costume parade and he was thrilled that we came to see him in it. 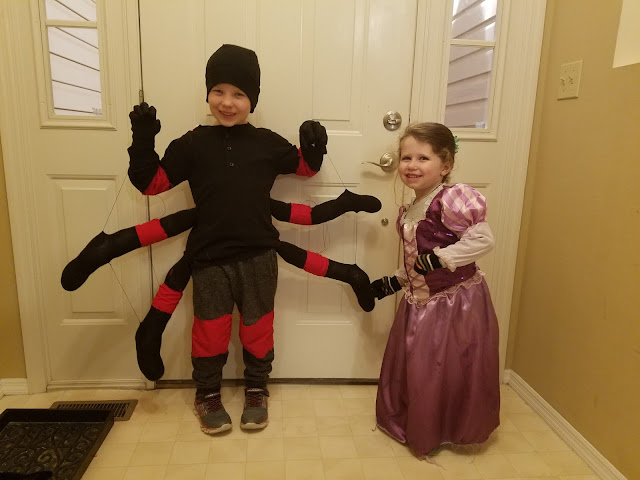 In the past Keith has braved the cold and taken the kids trick-or-treating while I stayed in the warmth of the house handing out treats to kids. That didn't work this year since the missionaries are supposed to be in a member's home that evening. We have elders so Keith got to stay and pass out the play-doh while I took the kids. I admit that I enjoyed it though. It was fun to see the smiles on the kids faces, the costumes of neighbor kids, people passing out candy as they sit next to a fire on their driveway. Not to mention the house directly across the street that has Halloween lights synced to music that plays in the street on Halloween night. It was a street party in the cul-de-sac! (It also boosted my ego a bit to over hear parents and kids talk about how cool and unique Charlie's costume was.) 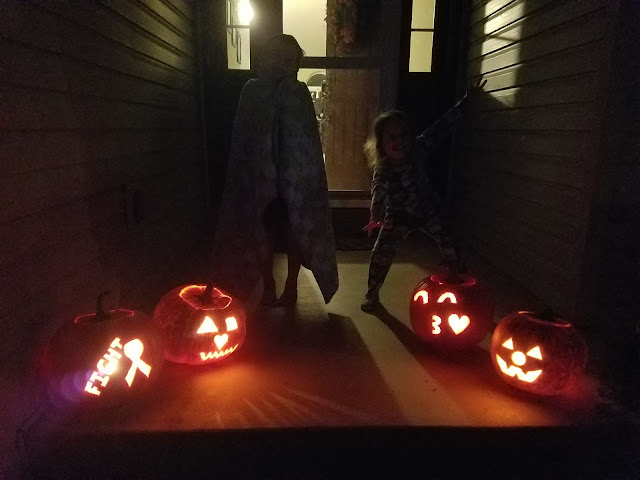 Two little pumpkins and our jack-o-lanterns.
Posted by Katie at 10:49 PM