We have been keeping busy this winter. Here is a photo dump of some of what we have been up to... 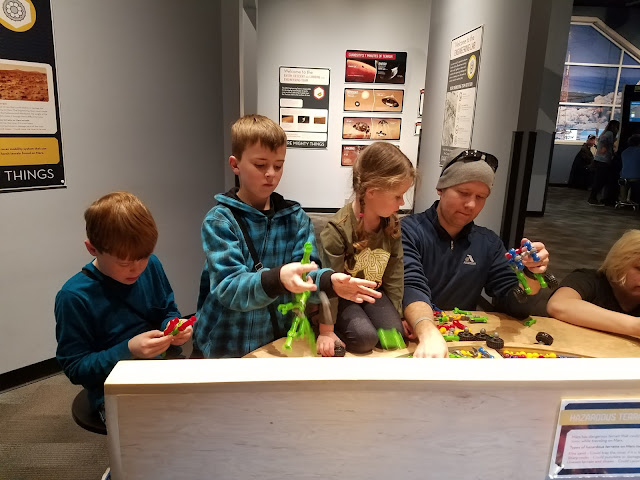 Paul and Jenae and family spent a day with us shortly after Christmas on their way to Arizona. It was super cold so we took them to the science center. One of the places in the science center the kids tend to always go is the Mars Rover room. Specifically the place where you get to build your own. 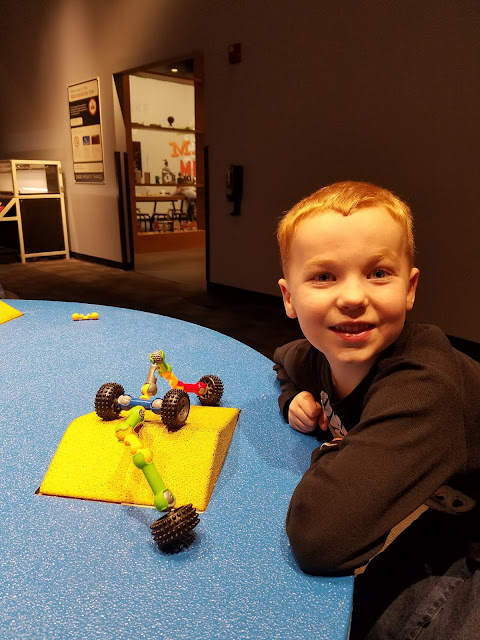 Then you give it a test drive. 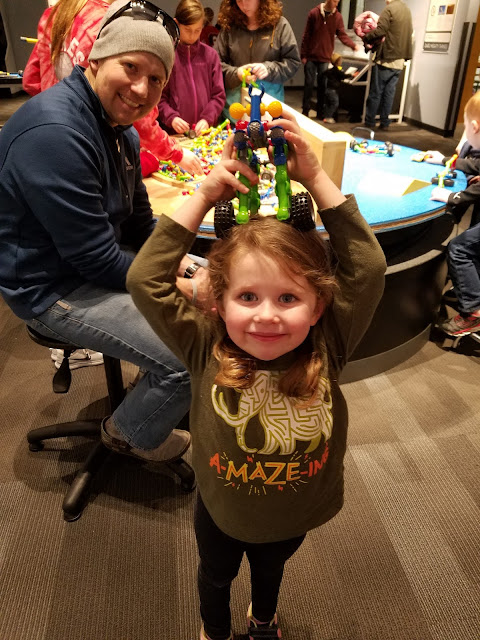 Keith made one for Jane with a bit of her help. 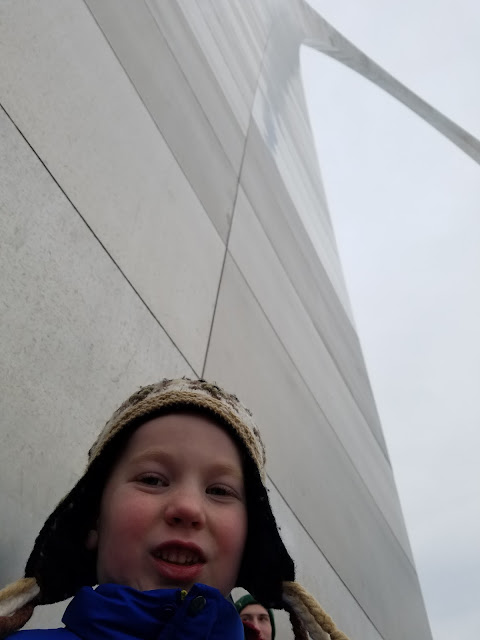 One of the things Charlie has wanted to do for the longest time has been to ride to the top of the Arch. Keith had time off after Christmas so we decided to go. 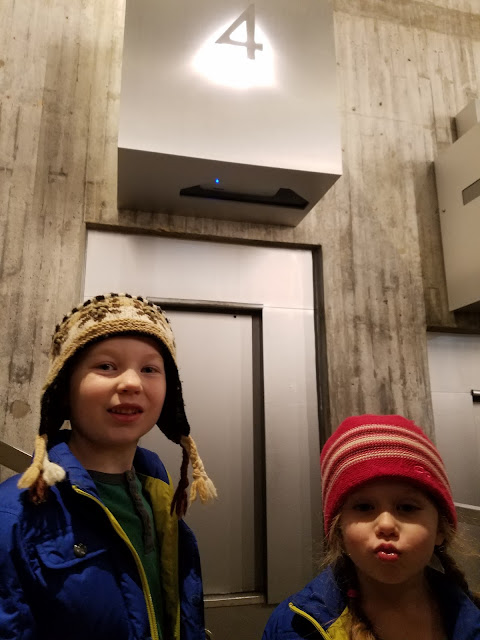 Waiting for the little door to open so we can enter our tram "pod" that will take us to the top. 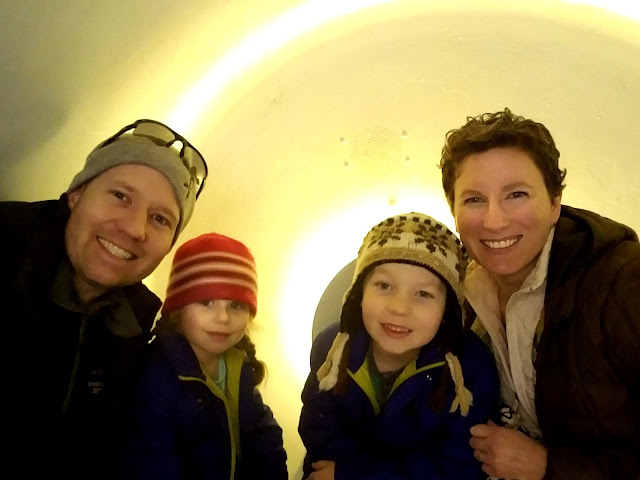 Only 5 little seats per pod. It was like being inside a large egg with a glass door so you can see out into the inside of the arch. The engineering behind the whole process is fascinating to me. The actual engineers in the family would think it is pretty cool. 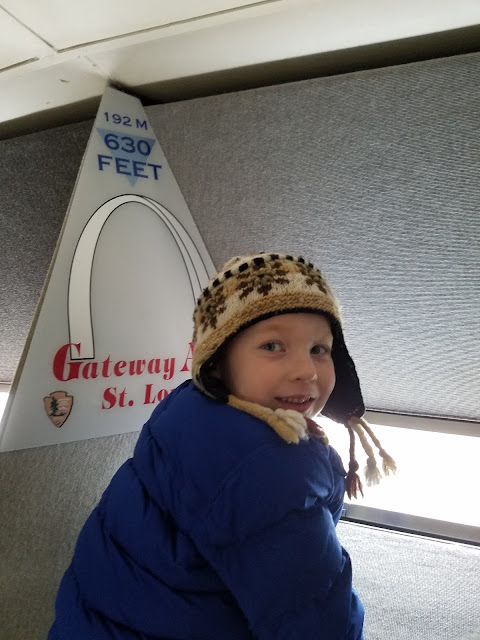 Little windows at the top! 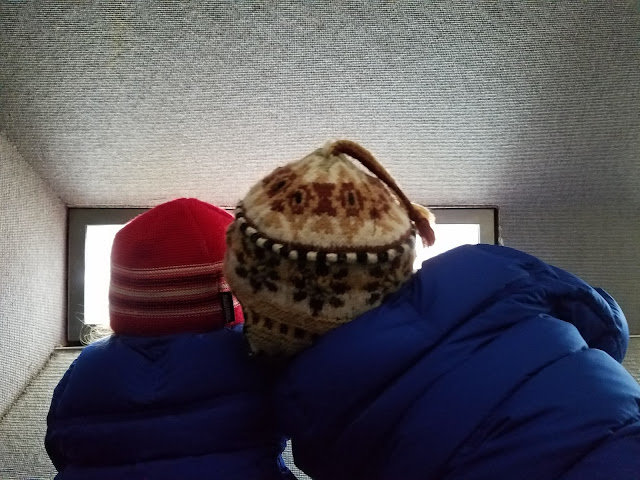 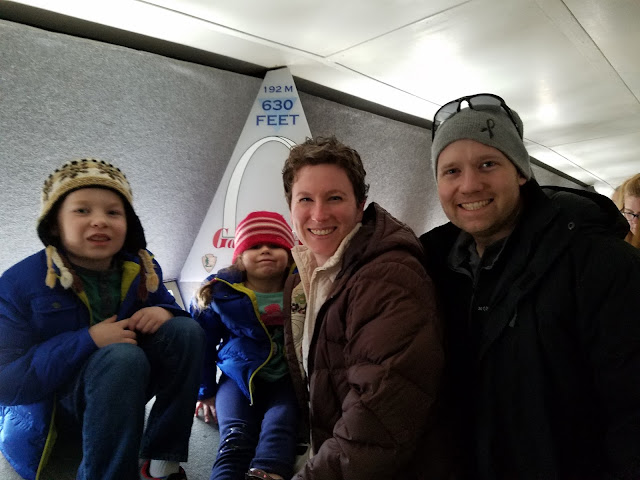 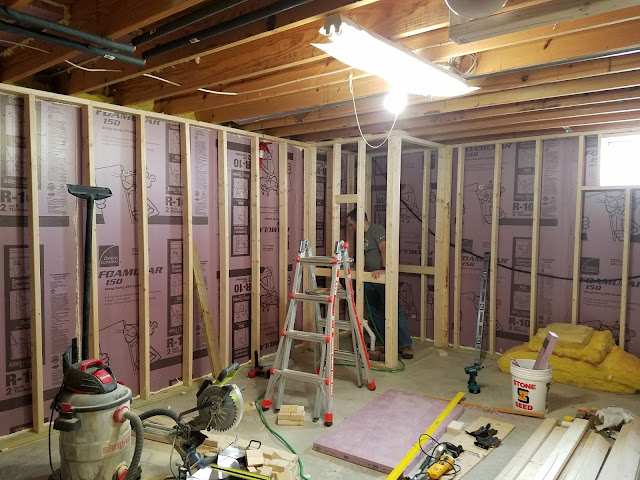 One of the things that was a big seller for Keith in our house was the basement that is almost completely unfinished. He worked in construction and this was a blank canvas that made him giddy. The part of the basement that is finished is fairly small and we really wanted to open it up more to give the kids and their friends a bigger place to play and go crazy without driving me crazy. So we are finishing a section of the basement and will knock out the wall in between it and the original finished section. Keith has enjoyed having a project, especially during the winter. 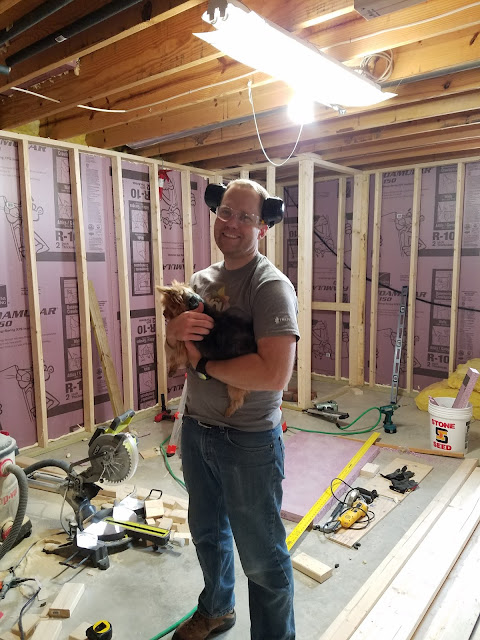 Molly likes to follow me down and sniff around the construction area while I am there. Whenever we send her out she is right there on the other side of the door waiting for us. The framed in box looking thing in the corner goes aroung the sump pump. However, the sump pump pipes aren't that tall so Keith framed in a raised floor for a reading nook that will have little steps going up to it. It has been fun to brainstorm various ideas of how to make the space fun for the kids. 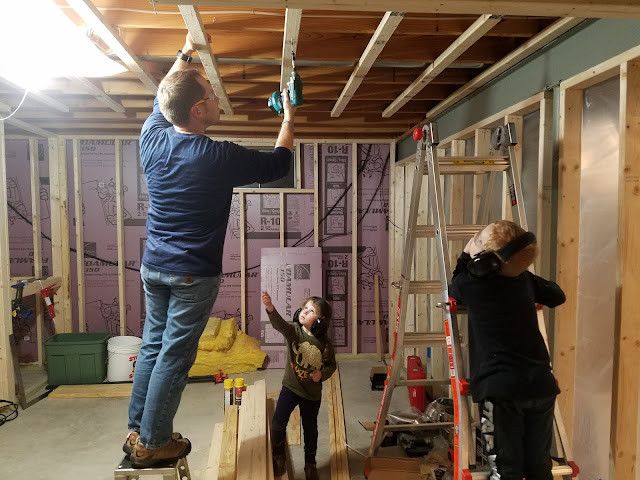 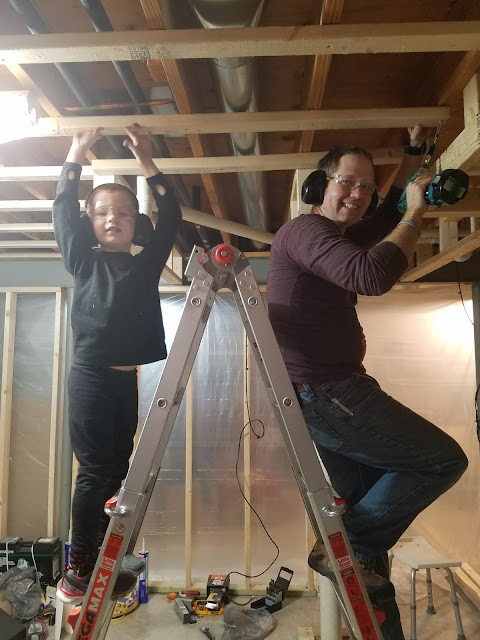 The kids get so excited when Keith has a job that they can help with! 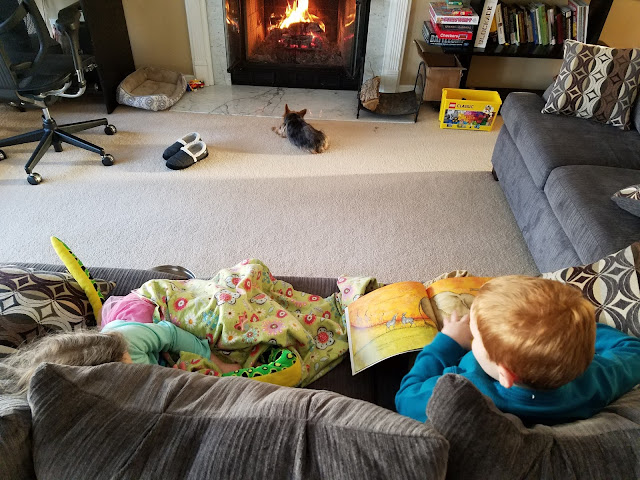 The flu season has been bad across the country this year and we didn't escape it. It hit some of us twice! It melts my heart to see how kind Charlie and Jane are when a family member is sick. They run to get their favorite stuffed animal or doll and give it to the sick person to help them feel better. Not long ago Keith and I were both sick at the same time. Ugh. Jane took her two most loved dolls and gave one to each of us so we could sleep with them instead of her. They draw pictures, cover the person with their own blankets and tell them over and over how very sorry they are that you are sick. Charlie likes to help Jane feel better by reading her books when she is sick. 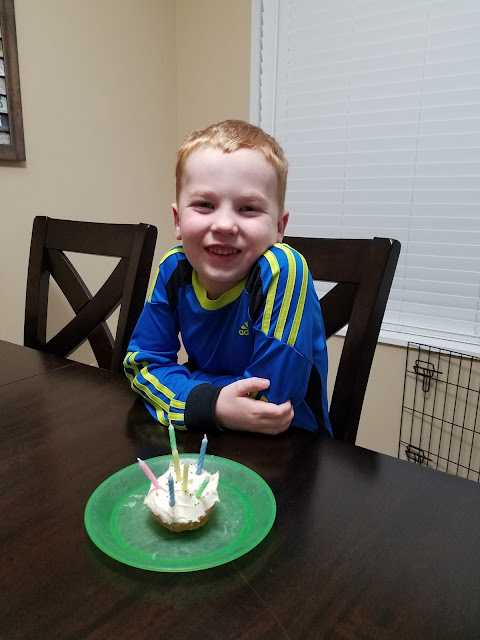 Charlie had a birthday!!! 7 years!!! Can you believe it? He is such a kind-hearted, inquisitive, energetic kid. We love him to pieces. 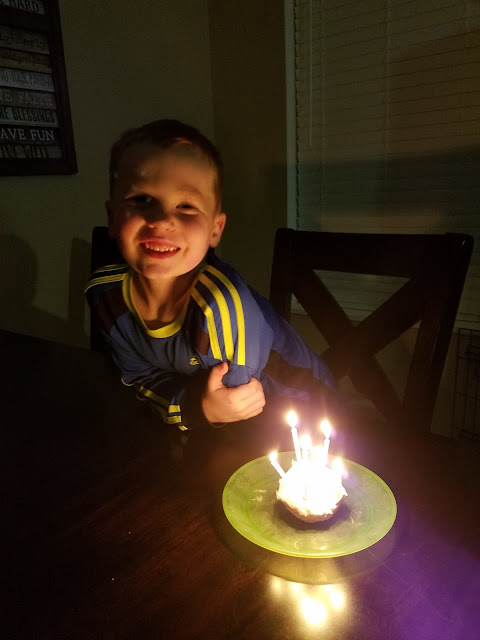 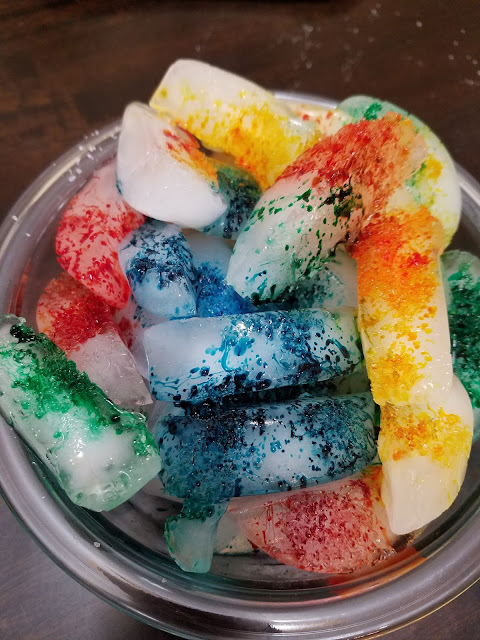 Speaking of which, he read in a book one day about a neat way to see the patterns that salt makes as it melts through ice, so naturally we had to do it. You sprinkle salt on ice then add food coloring which lets you see the veins of water left behind by the salt crystals as the melt deeper and deeper into the ice. It looks more impressive in real life and with clear ice, which we didn't have. 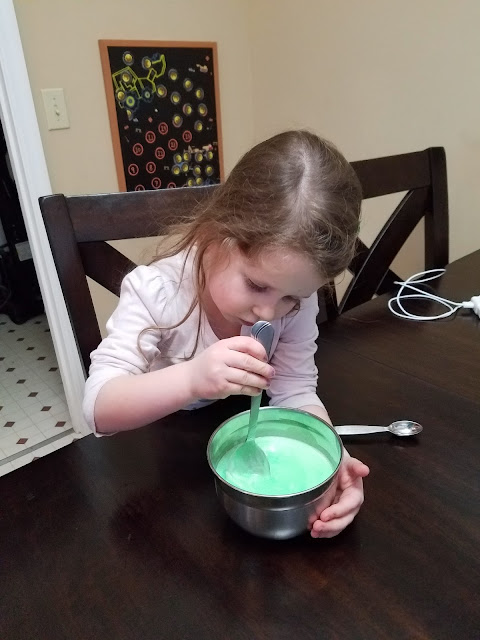 We also made slime for the first time. It was more fun making it than playing with it! Or at least I think so. 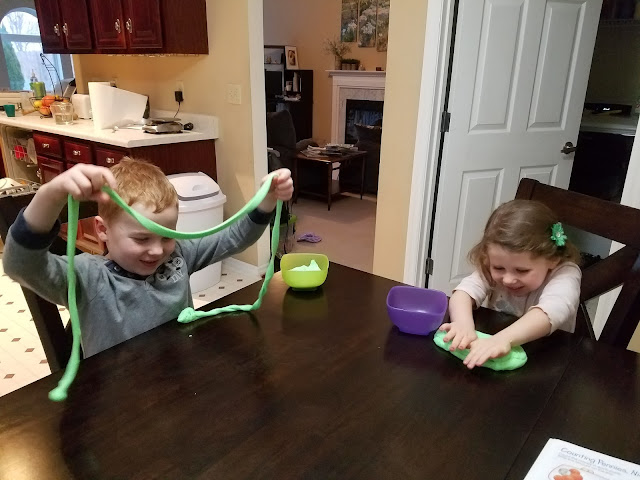 We added glow in the dark paint to ours as well. :) 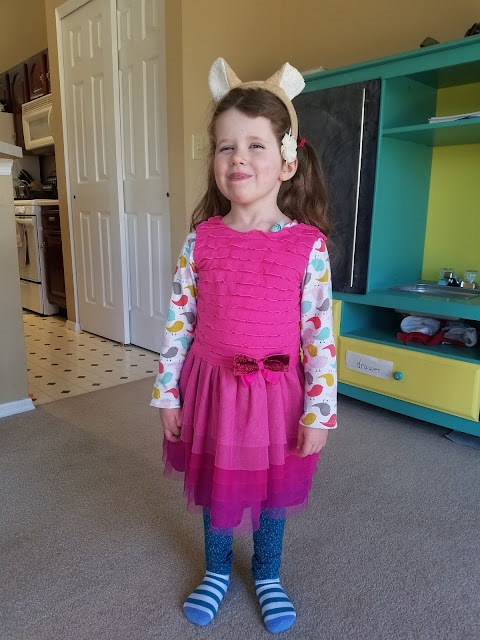 We don't have many days where we are going out in public so Jane has been choosing her own clothes with little say, if any, from me. This particular day made me laugh. She was wandering around obviously frustrated about something when she found her cat ears. She got a huge smile on her face, put them on her head, and proclaimed: "Perfect! Now I'm a princess!!!" I'm not sure what cat ears have to do with being a princess, but then again I am not a 4-year old. 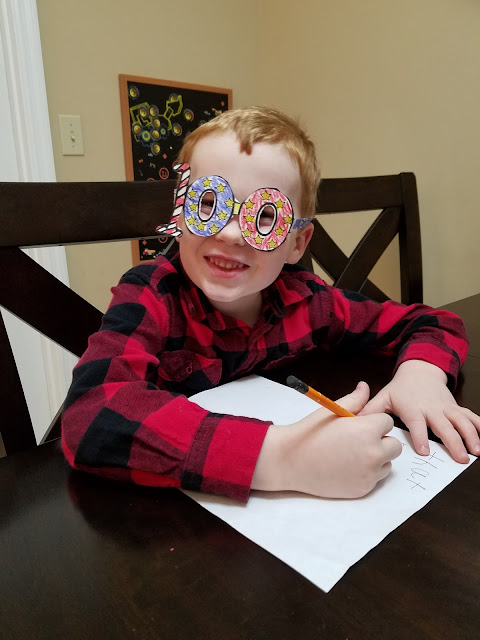 And last but not least Charlie is doing great in school. They recently celebrated the 100th day of school and he got these glasses. I don't know how well he could see in them but he managed to complete his spelling words while wearing them!

This was lots of fun!! Thanks dear Katie! <3
So sorry the flu found you but grateful you had such sweet little nurses. ;)

Thank you for posting Katie, Kate!! It always gives me a glimpse into Merrillville that I love to see and read about.