It's a Bird Eat Bird World 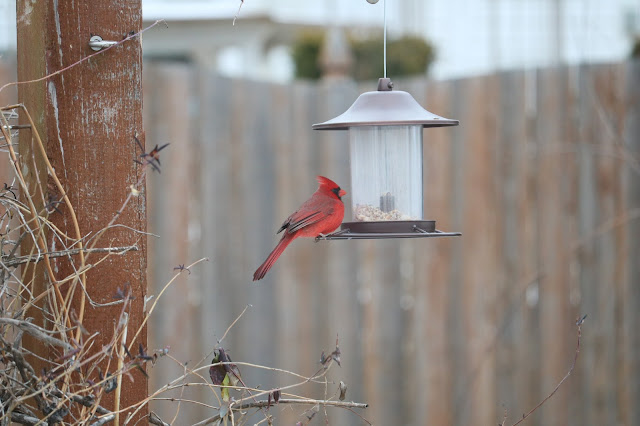 One of the things I enjoy most about our small backyard is the trees and bushes that attract a wide variety of birds. Ever since getting a DSLR camera with a good zoom lens I have enjoyed playing paparazzi to them. 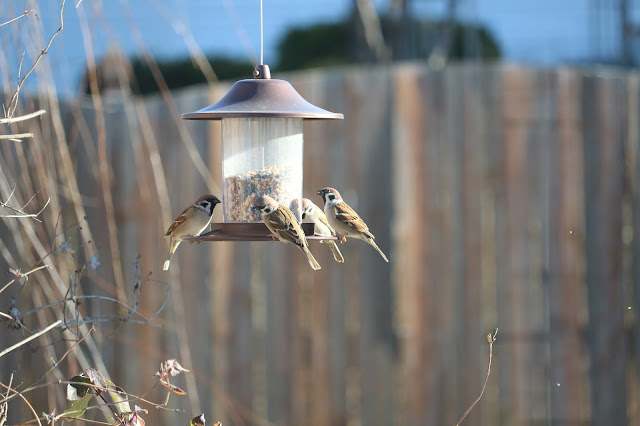 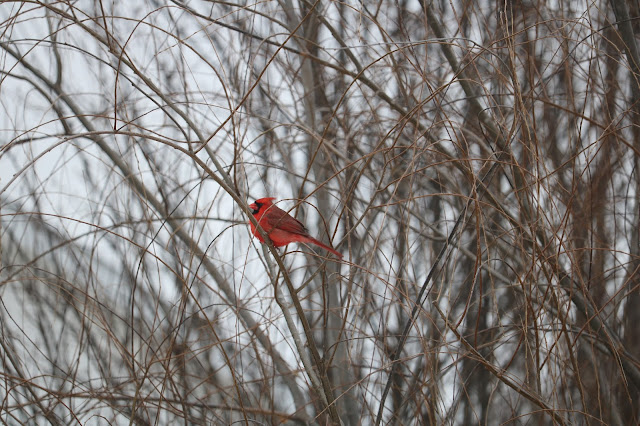 I love the splash of color the cardinals give against the dull winter landscape. Their are a good number of song birds that stay year round here but none as bright as cardinals. 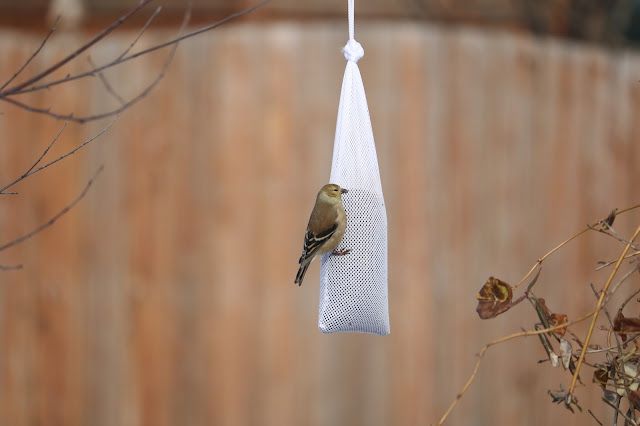 Even the usually brilliant male Goldfinch turns drab in the winter. 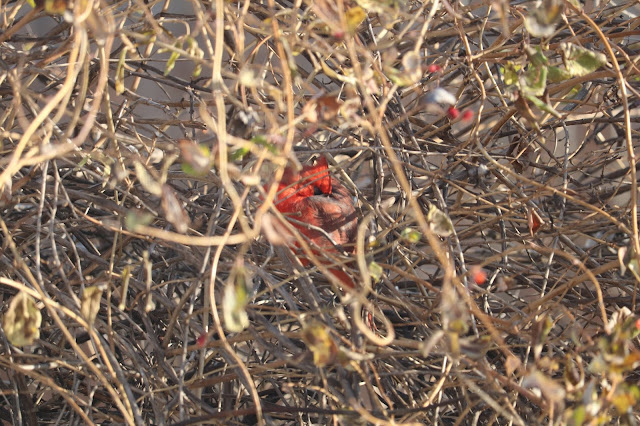 There are several thick trees and a large bush near the feeders that shelter the birds. I took the above picture one bitterly cold morning. How grateful that cardinal must have felt for the warmth of the sunshine after a long night! These trees and bush are also why I had little concern when I would see the occasional hawk up in the big tree. The little songbirds have plenty of safe places to hide right next to the feeders. They have as good of a chance at surviving a hawk attack as they would anywhere. 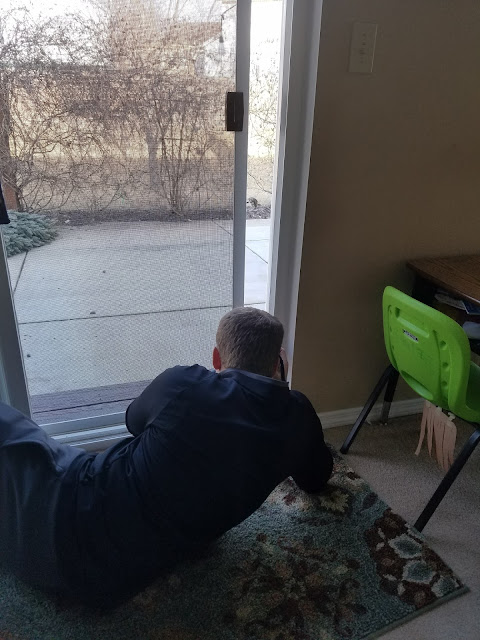 One late morning Keith and I were talking near the back door when out of the corner of my eye I saw a hawk dive into the big bush and birds frantically fly out of it. For a while it flapped around as if struggling to escape. I began to wonder how I was going to free a raptor from it.

But eventually it dropped to the ground and, to Keith and my amazement, had a small bird in its talons. It had actually got one. Keith grabbed the camera and began snapping pictures from the backdoor. 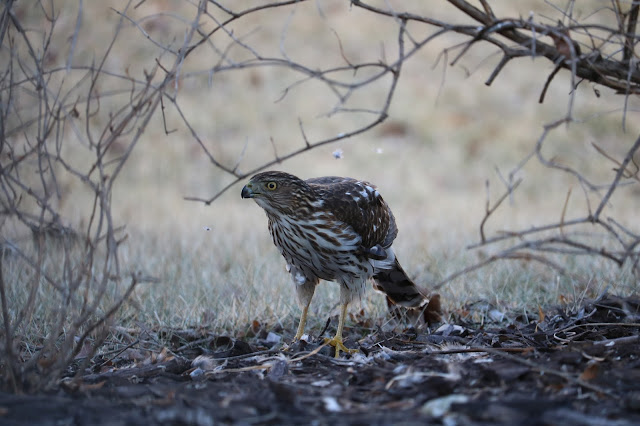 The down feathers are still falling in this picture. 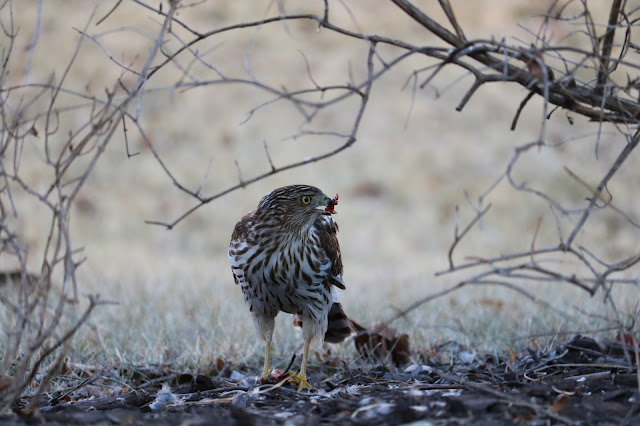 I don't think I have ever had this kind of opportunity to see a wild raptor this close. It gave me a good chance to identify it, which I have a hard time doing with raptors. It was a Sharp-Shinned Hawk. 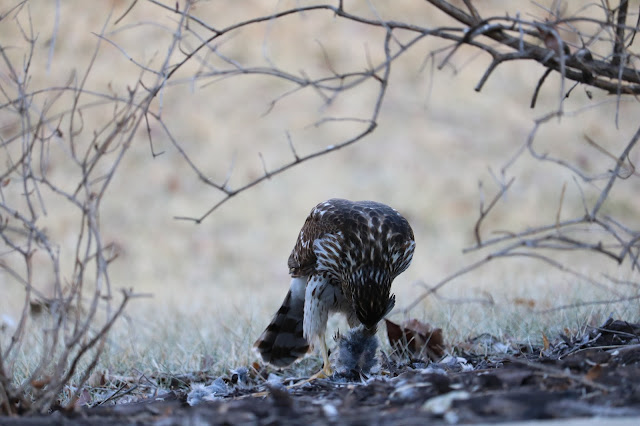 At first I thought it got a Eurasian Tree Sparrow but after looking at the pictures I think it might have been a junco. They are cute. I kind of hope it was the tree sparrow. 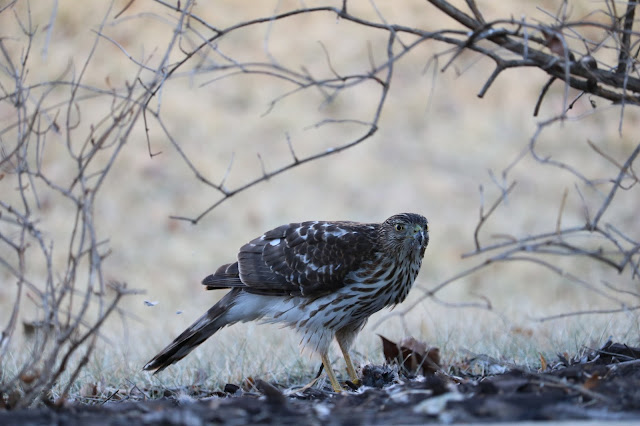 The whole time I had the voice of David Attenborough* in my head narrating the whole thing. 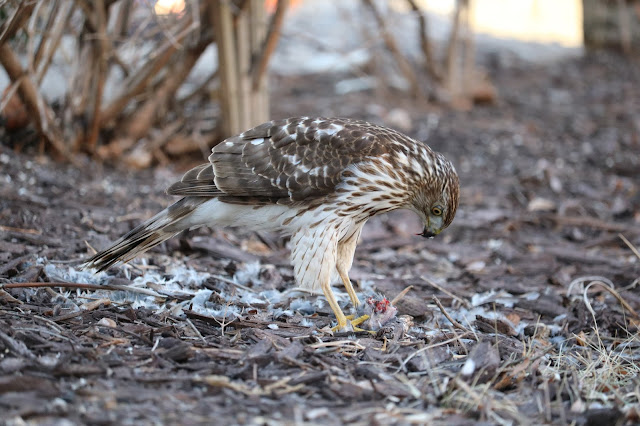 After awhile of taking pictures from the door Keith slowly made his way outside, giving the hawk a wide berth. As long as Keith kept his distance the hawk seemed okay with his presence. 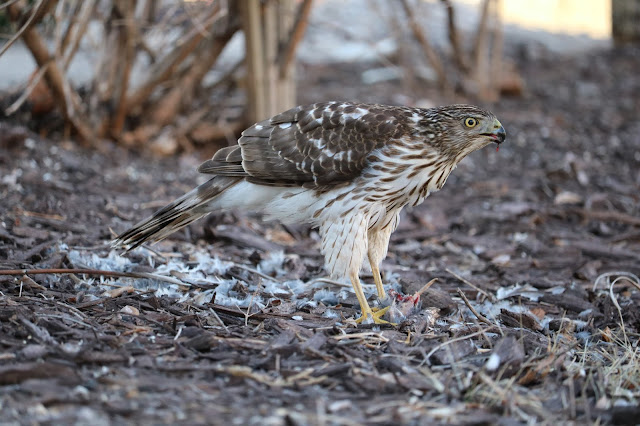 Eventually it flew off to finish its meal in private.

I guess you could say that in a way my feeders feed two tiers of the avian food chain. Though I only intentionally provide food for one.

*I tried to find a link to one of Attenborough's many shows for those unfamiliar with his voice and way of speaking. There were just too many to choose from! He is most well known for his narration of BBC's Planet Earth I and II, Blue Planet and Human Planet. I absolutely love the way he narrates. Look him up on YouTube or watch an episode from one of his series. You won't regret it. (If you want a recommendation, Charlie's favorite episode is "Deep Sea" from Blue Planet. Jane likes the "Grasslands" episode of Planet Earth I, because it has zebras and elephants. If you want my recommendation I would say the "Mountains" episodes from both Planet Earth I and II, but really you can't go wrong with any of them. ;)  )
Posted by Katie at 10:41 PM

Ahhh!!! Those sharp-shinned hawks are so good at hunting our bird feeders aren't they! Beautiful pictures you two. <3

Your back yard is the perfect spot for a bird lover like you Katie. We will have to watch one of your recommended shows, or all of them. I thought of you when we were at Kukum National Forest a couple weeks ago. There were some bird watchers on the canopy walk from the US all set up with their cameras. They pointed out a couple to me from the Birds of Ghana book. There were some that looked like hummingbirds but weren't. There was lots of singing going on in the trees and it brought my Katie Kate to mind. Love you girl!