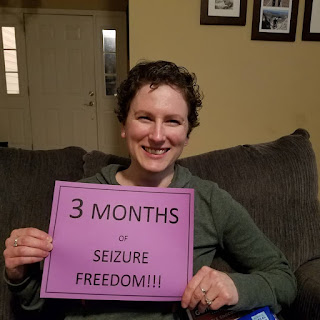 For the last few years my seizure frequency has been declining. Considering that when they started I was having an average of 16 strong ones a day, that is pretty awesome.

On March 1st I reached a huge milestone...

It was also DOUBLE my previous record!

Shortly after that I had one minor seizure (ugh!) but if you don't include that, I have now gone...

The freedom I feel is wonderful. Free from fear of when the next one will happen. Will I be on my bike, holding a knife, in a store, will it be a strong one, etc, etc, etc? The sensation I would get before each one was exactly like my arm muscle was a little fatigued. I really cannot tell the difference between the two sensations.

I remember having a panic attack rock climbing for the first time post the beginning of the seizures. My arms got a bit fatigued and I was frantically trying to tell Keith to lower me down. I was terrified of having a seizure dangling from a rope against a hard climbing wall. Sadly, it was a long time before I dared go climbing again. It was just too much. Once I realized that I was going a long time without a seizure however, I focused on working my arm and grip muscles so that they were fatigued almost every day. For about the first month I had to suppress the fear that for 6 years I had had every time my arm muscle felt fatigued; the fear that a seizure was beginning. I wanted to retrain my brain to no longer associate that sensation with seizures. Every time I felt it for almost two months I would repeat in my mind I would repeat to myself that it was not a seizure, just tired muscles. "This is not a seizure Katie, just tired muscles." And it worked. I can't guarantee that I have had my last seizure ever, but I love living free of them now.

And oh how the brain is a hard muscle to train. I felt something similar with my pregnancy with our new baby, because all my previous miscarriages happened right around 12-17 weeks, I was in a panic, especially during that time, thinking "am I miscarrying" when will it happen? I thought I would feel better once I passed that 17 week mark, and there was a small moment of relief, but I still felt so anxious the whole pregnancy. So afraid to buy baby clothes or anything. It wasn't until he was born and I heard him cry that I really sighed a big sigh of relief. However I still panic and worry if he is breathing probably several times an hour. He is 6 months old, and I keep waiting for that fear of losing him to let up. I really need to train my brain to relax, to have faith and hope. Why is it so hard?

I am so proud of you. So amazing how far you have come. I sure love you!!