Happy 2008 everyone! Being home has been great. Wood fireplaces, animals, open space, tall trees, Mom's cooking, and most of all: family. All things that I miss while in Provo.

Joe is in high gear getting the last things ready for his mission. He leaves on January 16th and will be serving in the Russia Vladivostok mission. The family joke lately has been that he is going where Mom wished he would go when he was younger; that is eastern Siberia. It still feels a bit weird that my younger brother is growing up and going on a mission. He is going to do great and I will miss him.

Saturday we drove over to Leavenworth to cross-country ski and play in the snow. We had lofty hopes of finding some ice to climb, but that didn't pan out. Washington has mastered the wet winter, but not the cold, ice forming sort of winter. After the sun went down we drove back into Leavenworth to walk around and find some dinner. Leavenworth is a little mountain town that looks as if it was transplanted from the Swiss Alps. All of the buildings are in the Swiss village style, and the commons even has a Maypole. It is lovely with the snow and Christmas lights all around. 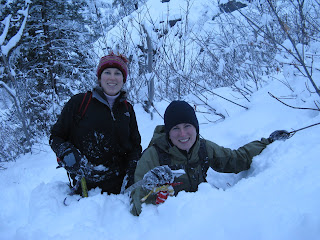 The snow was a MUCH deeper and fluffier than we had predicted (as Liz and I found out when we wandered off without snowshoes). Shortly after this photo was taken I sunk well up to my neck. 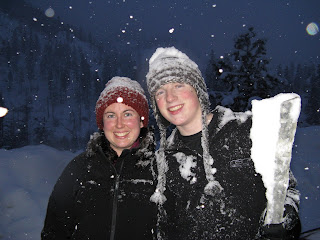 Alex found a giant icicle, yum. Sarah came even though her hubby, Darren, could not. Nice to know that we haven't been totally replaced. :) 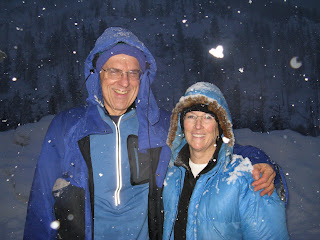 Last, but not least, my wonderful parents. Sorry about the lack of action shots, we were too busy having fun.

Between family, and getting last minute things in order for Patagonia, I have neglected my blog lately. But for those of you who read this, I will be better at posting in the future. Here's hoping that you all have a great beginning to 2008.