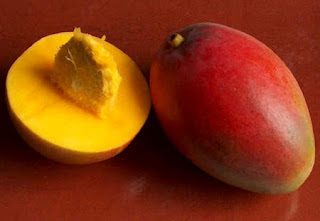 I love fruit, all types. So when I saw that Smith's had ripe mangoes on sale I excitedly bought one and delightedly ate the whole juicy thing in one setting late Wednesday night. It was the first time I had ever had more than a couple slices in one setting (that is the consequence of having siblings) and I savored every bite.

The mango began to exact its revenge about 3am Thursday morning when I awoke with swollen hands, face, and tongue, nauseous, and with nasty bad abdominal pain. My dear roomies awoke to my moaning and called my home teachers who gave me a blessing and carried me to the car. Melinda committed what was probably her first ever traffic violation when she ran a red light on the way to the ER. Three hours, an IV of pain meds, a couple blood tests, and a cat scan later I was released with a confused shrug from the doctor. It was only later that I thought back to that mango. Why couldn't I be allergic to something like Brussels sprouts instead?

After breakfast at Denny's and a long nap I was feeling almost back to normal so I went ahead with the fourth of July canyoneering plans I had. Those pictures are coming...
Posted by Katie at 12:23 AM

Katie - I can't believe it! Mango allergy. You are so lucky you didn't grow up in Hawaii or something. Imagine the taunting.

There goes that girl who can't eat mangoes!

I have a friend who grew up in Hawaii and is violently allergic to mangoes! Sad day.

Glad that you woke up on time!

Good times, good times. I think we should go to Denny's on Thursday morning just to commemorate the one-week mark of you being completely mango-free.