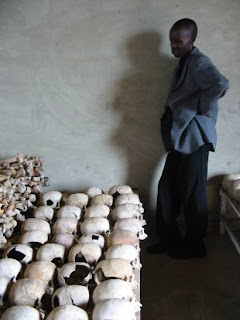 Most, if not all of us have heard of the horrific genocide in Rwanda that killed one out of every eight people there. The stories of what happened are chilling and leave us horrified and sad. They seem to show a nation broken and without hope of repair.

Then last week I was listening to NPR and heard a story that I could hardly believe and haven't been able to stop telling people about. Here it is, in a nutshell:

The new government of Rwanda threw all of the genocide perpetrators they caught into jail but there were too many for the jails to hold and for the courts to deal with. So the president released over 50,000 of them (that had admitted to their crimes) back into the communities of Rwanda where years before they had brutally murdered the families and friends of their neighbors. It was now not possible to bring these murderers to justice, so Rwanda turned instead to reconciliation.

Gathered under the shade of trees villagers meet to hear the confessions of the released perpetrators and then decide on a punishment for them. This punishment is never death, and is almost always community service. The idea behind this nationalized reconciliation is not to put justice into the hands of the victims, but to put forgiveness into the hands of victims.

Laura Waters Hinson, a film student, heard about Rwandas efforts at reconciliation and went there to make a film and answer the question: is it working? Could someone who watched their entire family be cruelly murdered forgive their murderer? Could they be neighbors? The answer is a surprising yes. The film she made tells the stories of two women who are the sole survivors of their families and are now living just down the street of the men who murdered their parents, siblings, and husbands. As a show of their desire for forgiveness the two men have built the women homes. The two women are struggling between their feelings of hatred and sorrow, and their deep belief that as God forgives us, we must forgive others.

The title of the film is As We Forgive. It is not available in video stores, but I encourage you all to check out the website and watch the trailer. You can also either buy the movie from there, or see if there is a viewing in your area.

I think at times we are all prone to complacency in our spiritual and moral beliefs. We may drift towards being "Sunday believers" only. I pray none of us will ever be tested as the Rwandans have been, but I hope we will remember their example of faith in Christ's teachings of forgiveness. May we never forget that the lessons we nod our heads to in church have real power if we put them to use.

P.S. On the website, under the news section, you can listen to the entire NPR interview that I heard on the radio. Turn it on while you wash the dishes or brush your teeth. It is worth it.
Posted by Katie at 9:10 PM