A ton has happened since I last blogged. So I am going to just give a summary. There are a lot of pictures. Here we go...
My mom stayed with us for two months while I recovered from surgery and tried to figure out the whole seizure thing. I am still having them but hopefully this new med will do the trick. Hopefully? 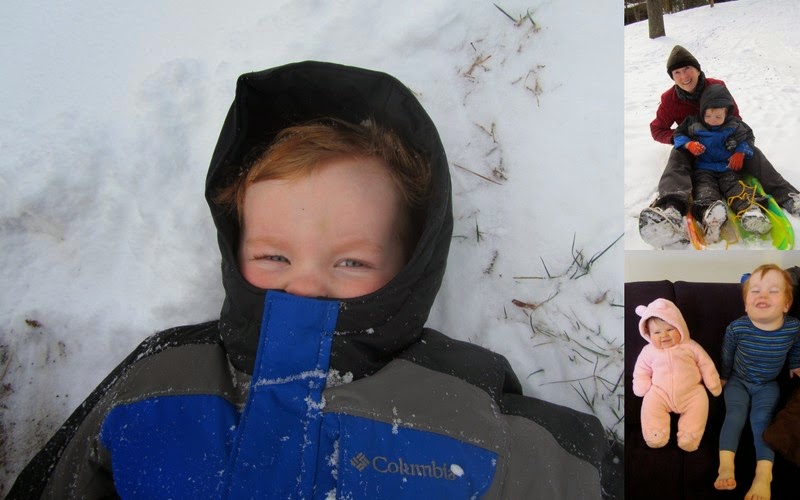 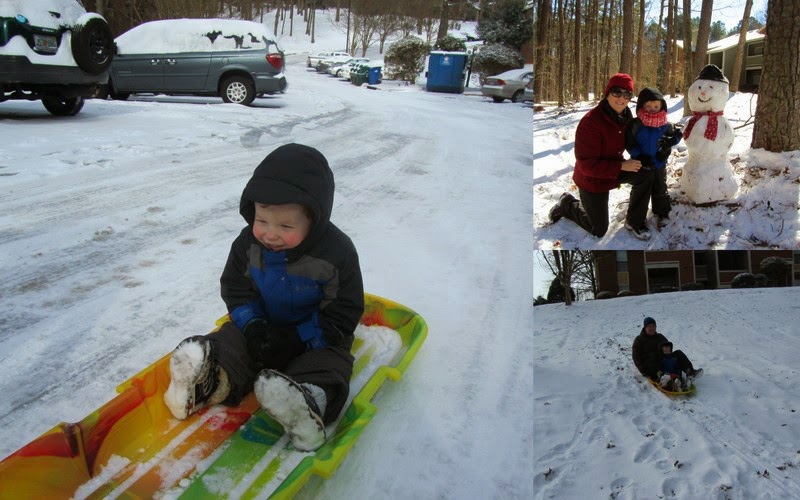 Mom helped Charlie (or is it the other way around?) build a snowman right outside our window so he could watch it get small, small, small.
Mom went home. :( 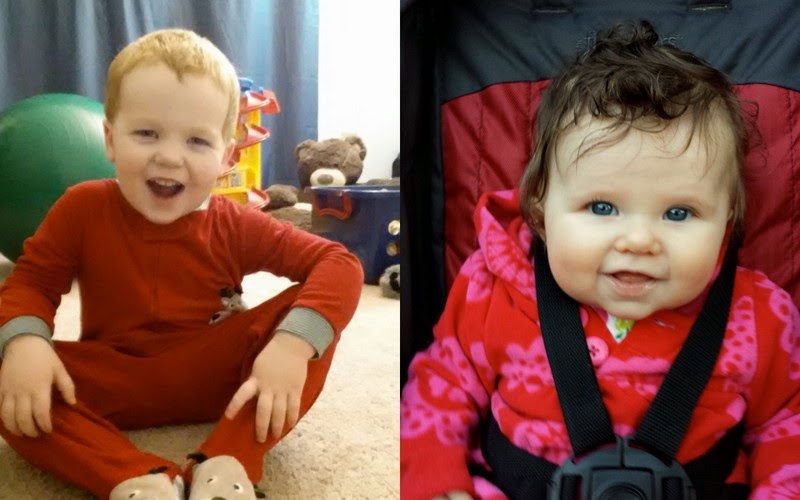 We did a little bit of yoga and went on few walks. 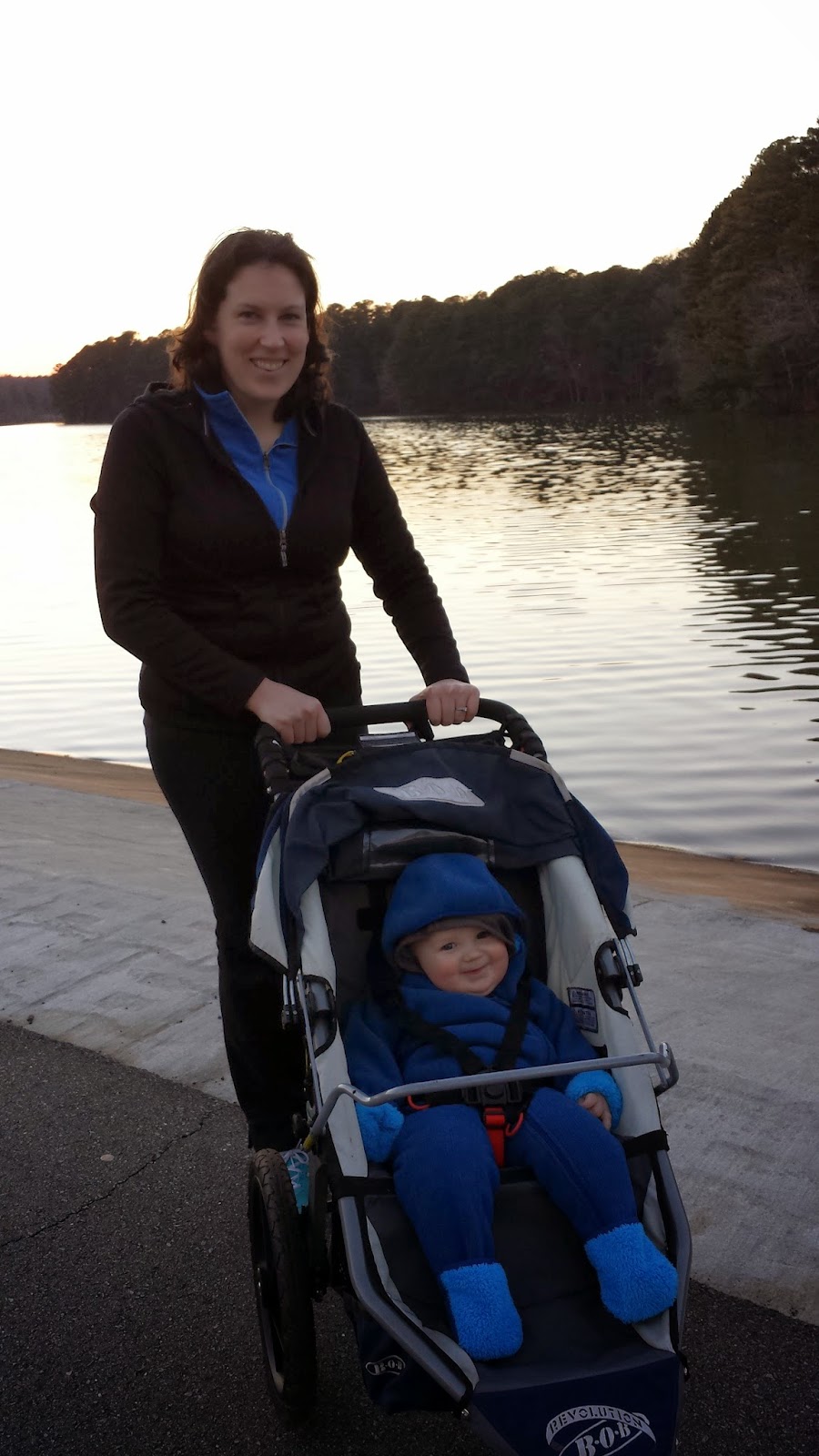 So Jane got to meet her cousin Ben for the first time. 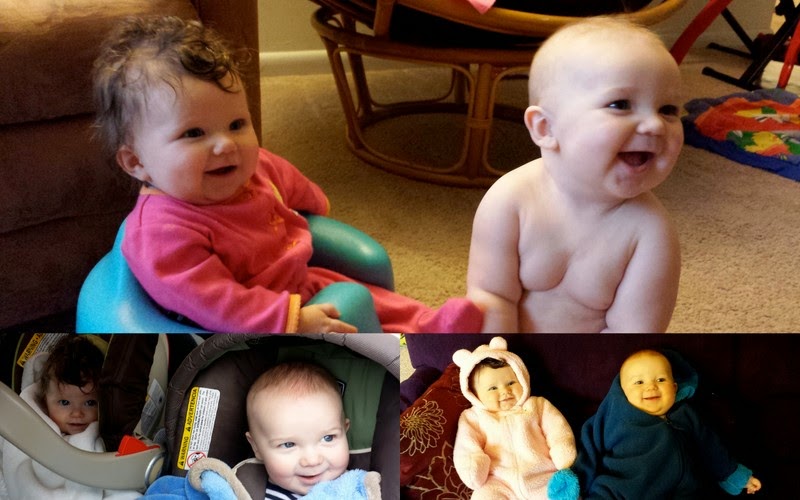 Charlie shared his cars and trucks with Ben, which means love. 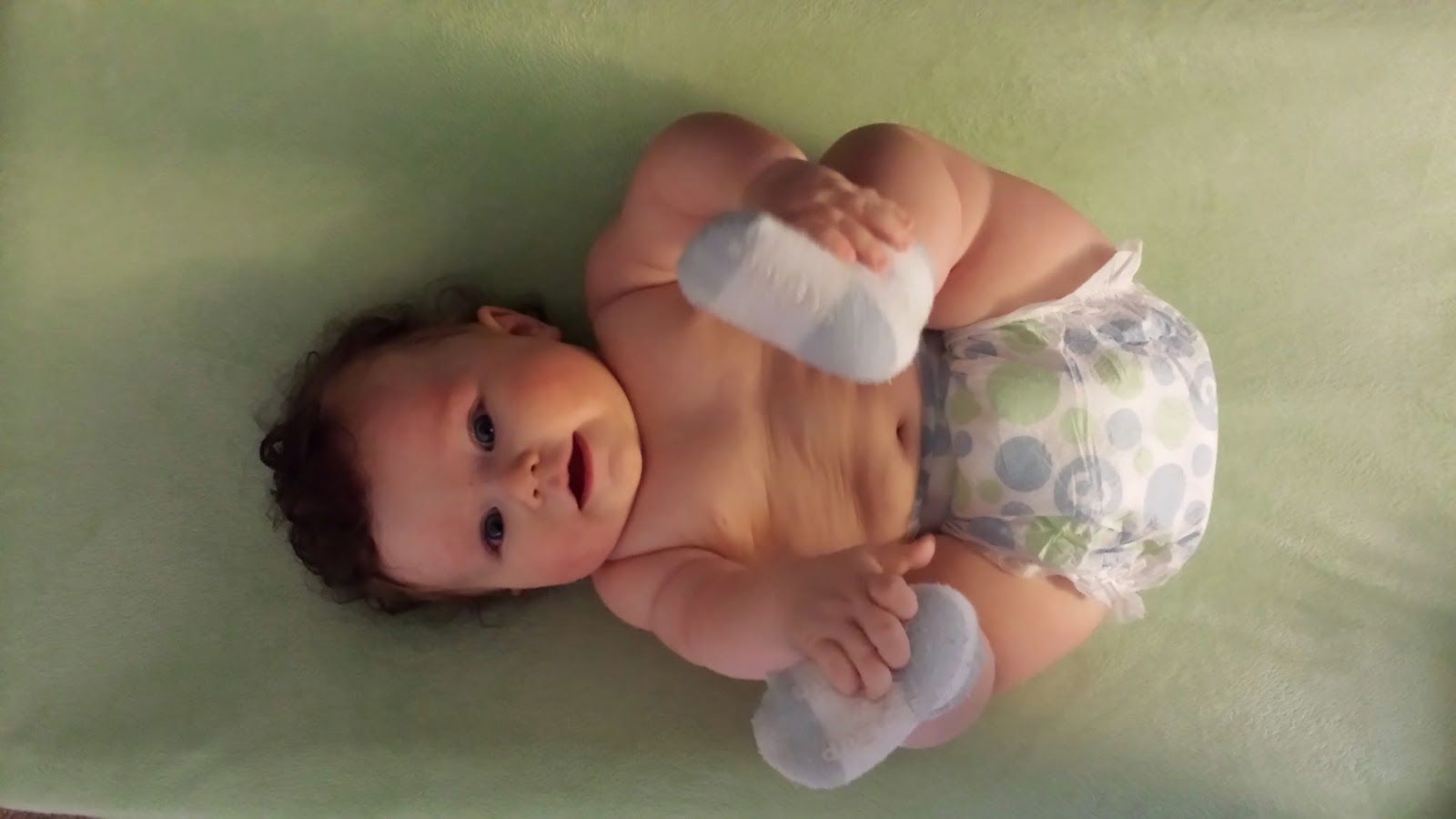 Jane discovered her feet, which I think is super cute. 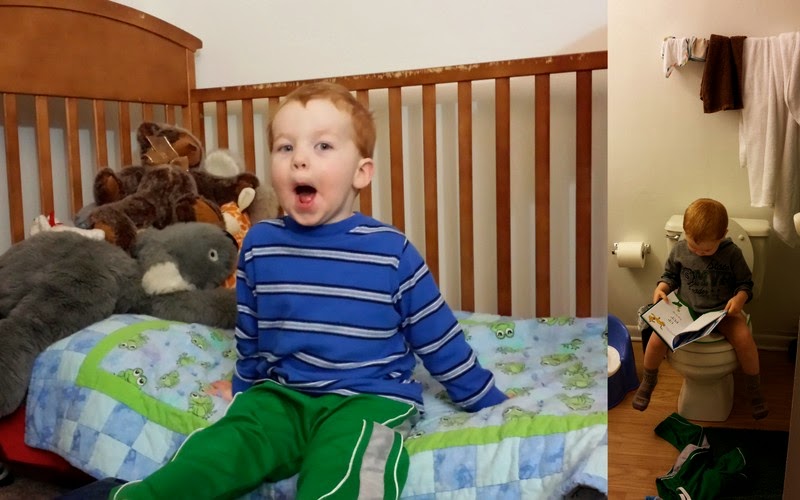 Charlie got a big boy bed (we just took one of the sides off his crib until we move the big bed that our multitude of guests have been sleeping on into his room), and is potty training! He can now keep his pants dry all day but has yet to poop in the potty. We have tried a lot of things but any advice is welcomed. 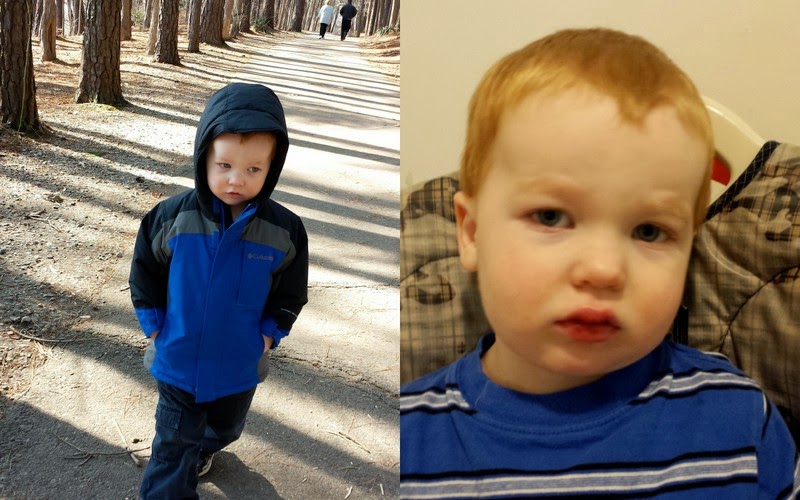 Charlie learned the hard way that you shouldn't run with your hands in your pockets. 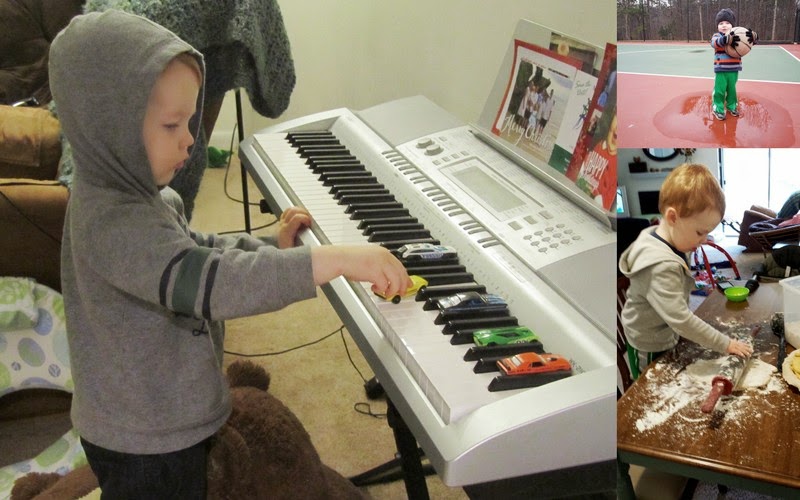 Charlie also parked his cars on the piano (which he has done for quite some time I just have never been sneaky enough to get a picture of it), discovered basket ball (the hoops are high), and "helped" me make pie for pi-day (okay, so that picture is more recent, I just wanted to put it in). 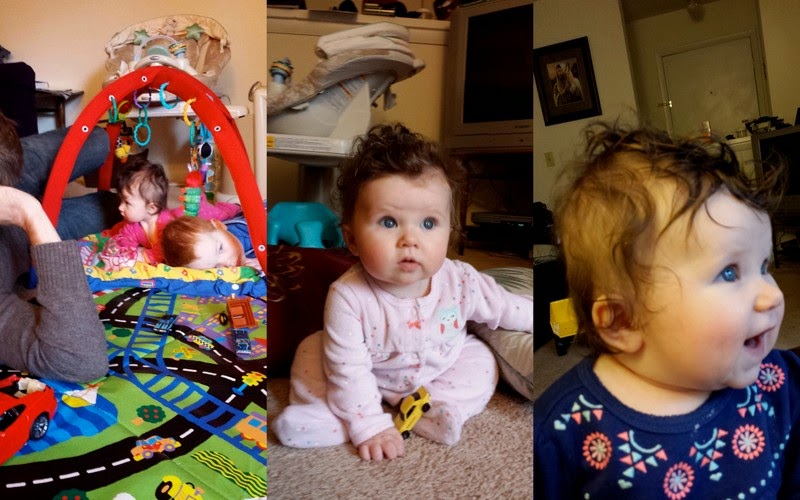 Charlie did tummy time with Jane, Jane is learning to sit up (which she is very excited about until she does a face plant), and Jane discovered rain. 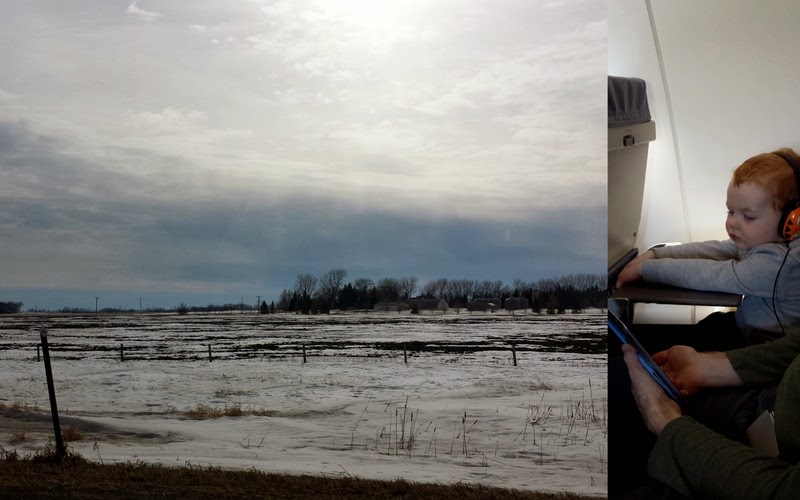 Keith got a few job offers and after narrowing it down to two (Fargo, ND and Kinston, NC) the company in Fargo flew us all out to check out the area. Charlie's first words after exiting the small airport in Fargo were "My face is cold." Yep, cold (very, very cold), windy, flat, with very few trees. Also has great people, good schools, and stores that carry a lot of Charlie's low-pro foods. But did I mention that it is cold and flat?

So we went back home and Keith accepted the job in Kinston, NC. But as soon as he did we both felt unsure about the decision. I just kept on thinking about it being incredibly cold in North Dakota.
Keith, who had a field site in Kinston, suggested that we take a drive there to see the area. So we did, and it was sad and scary. There were these big southern houses that were abandoned and falling apart. Crime was high and schools were terrible. 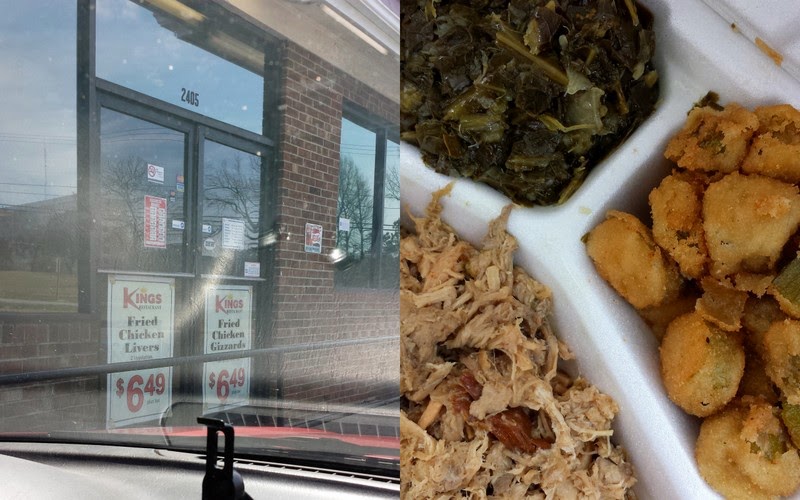 Then we hit Winterville which is a very small community outside of Greenville that was very nice. We kept on thinking of ways we could make living there work (the stores didn't carry any of Charlie's food so we could make trips to Raleigh once a month, etc). I realized on the drive back that if I lived in Winterville I would never want to venture outside of it due to how terrible the rest of the area is.
I reminded myself again of how cold it gets in Fargo and so when we picked Charlie up from our friends place we told them that we were pretty sure we were sticking with North Carolina.

That night, after the kids were asleep, Keith and I sat on the couch and thought things over. In the end we came to the conclusion that we should move to Fargo. Immediately we felt at peace. So Fargo here we come! (In September). Keith and I made a deal that every January/February, when I start going stir crazy I can fly to some place warmer.

Which isn't hard to do when the high with windchill is sometimes below -30 degrees Fahrenheit.
Posted by Katie at 2:37 PM

Might I mention that Puyallup is "warmer" in January and February. Probably wetter also, but warmer!!!

Thanks for the precious pictures. That was a LOT to catch up on. Glad to be a part of it. Love you Katie, Kate!!

Jane is a doll, she is so cute. Fargo does sound cold but it can't be cold all year can it? Cold sounds nice to me. Good luck!

Oh I loved all these pictures and updates. First of all, I bet your mom is in hog heaven with all these beautiful grand-babies. Oh my goodness, so cute it makes my cheeks hurt from smiling so much. And so excited for your adventure. And that cold, -30 ? brrrr. Wow, I thought it got cold here. Well it will make some tough strong kids! But think, it wont be too hot and humid in the summer right?

Your little Jane is too adorable to believe. And your haircut is so cute! I second your mother, that you might need to spend a lot of time in Washington to thaw out in the ND winters.

Wow! What an exciting move! Your kiddos are adorable (no surprise there). I loved reading your update and seeing how well you're all doing.

Thank you so much for the stories and pictures! Fargo is very lucky to get you. Love those adorable kids!

Ohh Sweet baby Jane is so so beautiful! Her long eyelashes and chubber cheeks make me want to just kiss them like crazy! And poor Charlie. His sweet face scraped up! How sweet that he gives his cars to Jane and Ben. And Ben could be Jane's brother for how similar they look! I love the Pixie cut! And I'm so glad that you guys chose Fargo. Bad neighborhoods and schools sounds like you'd be itching to get out of there. I'd like to put my vote in to visit UT in Jan or Feb, because we have a warm day every 10 in those months, and that still beats -30! I love you lady, and I'm so happy that things are stabilizing, despite the bumpiness. We have you in our prayers!

Yay for Keith almost being done with school! And congrats on the job and the move...and I'm so glad you were able to feel at peace. I'm sure Fargo needs you and that there are people there that you need to meet too! Another plus about Fargo is that it's closer to your family and will put all of us closer to each other for a roomie reunion...right?

Hey Katie! I got to your blog from facebook. Your job-finding experience sounds similar to ours! Andy accepted a great job with a company and as soon as he did we felt unsettled. Ultimately we backed out and accepted the ND one. We felt so much better about it so know that's where we are supposed to be. Although, unlike you, I preferred the North to the South. :) Anyways, we're glad you're here!