The other day I was reading through some of my journal entries from a couple of years ago when the seizures were really bad and many days were very dark. I didn't write often because of that. Perhaps I should have. This particular entry stood out to me. I wrote it during those precious few weeks after Jane was born and before I had the brain surgery.

I have been a bit hesitent to share this here because I didn't want to share something so personal and I didn't want to put a lot of focus on my struggles when I know that there are a lot of people struggling with worse things. Things that make mine seem tiny. I feared as well, that it may offend the wonderful people who love me and served me so much. And I never, never want to do that. However, I have felt strongly the last several weeks that I should post it.

I want to share it because it reminds me of that time when, despite encouragement from others, some days it was hard, nay almost impossible, to keep from letting the darkness and fear over take me. It was a battle I fought almost every single day. Don't get me wrong; there were many happy wonderful days, but I would be lying if I pretended that those times when I felt completely hopeless never happened. For better or worse, very few people saw them because I am one of those who don't break down in public. I would go into my dark bedroom, curl up in fetal position on the floor, and sob and pound the floor in private. I don't want to remember those times for the sake of dwelling on them, but rather to see what I had a very difficult time seeing then; it would get better. In some ways I wish I could go back and tell myself that. It will get better. So much better. On the other hand, as strange as it may sound to some, I am glad I can't. You see, because I went through that, I can understand a bit better what it is like to experience real anger, doubt, depression, and overall darkness.

I share this here in hopes that it may possibly help others who are struggling, truly struggling, to know that it will get better. Although I couldn't see it when I wrote this, I know it now.


"November 23, 2013 Walking in the Forest Around Lake Johnson

Today I took a 45 minute walk. Alone. It was the first time in 7 months that I have gone anywhere alone. 7 months! It as been so hard, so much pressure. I have felt the need so often to burst and scream. To breathe. To not feel eyes on me watching for the next seizure. Almost constantly I feel like I have been the focus of so much attention these last several months. A lot of it I appreciate: the prayers, fasting, help with meals and play dates for Charlie, and even the almost daily service of women coming over to just be with me. But I hate the sympathetic looks and uplifting words that come from the mournful faces of people who don't know what to say. I know they have the best of intentions, but sometimes I wish they would just say "that must really suck." Often I just want to know that someone understands or at least is trying to.

I spent a lot of those precious 45 minutes of alone time mourning my loss of independence these last 7 months and wondering when I would ever have an opportunity like this again. I kept fighting back the tears and trying to focus on the sound my feet made as they swept through the carpet of leaves and the sound and feel of the wind as it rushed through the empty branches. I tried hard to enjoy the smell of the cool air as it rushed into my lungs and the faint taste of decaying leaves that it brought with it. I have always loved the North Carolina autumns. I struggled to enjoy my brief moment without adult supervision, but the lump in my throat just kept growing.

It took a lot of effort, but as I practiced yoga breathing and focusing on things I could feel physically (wind, log, ground) it came; and with it I began to feel happy. The weight I carried was gone. The things in the past and future were not all happy and pleasant, but that moment was. I was happy when I focused my efforts on experiencing that present peacefulness and not tainting it with thoughts, worries, and fears that would pull me away from the beautiful now." 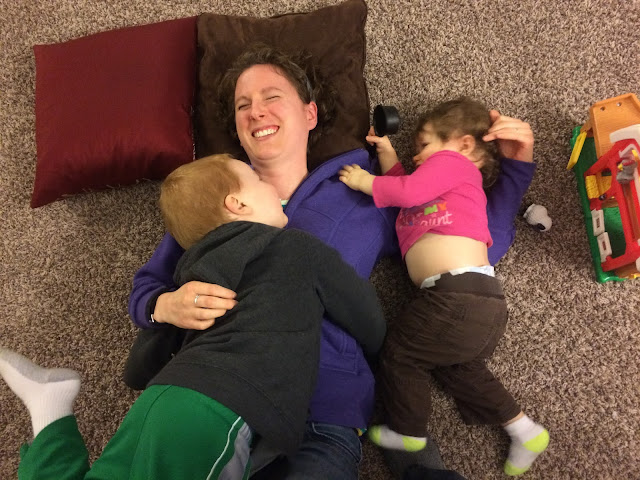 If only I had known then how very good the seemingly distant future would be.
Posted by Katie at 10:10 PM

Oh Katie. Thank you so much for sharing this. It is so powerful and meaningful. I've been in that darkness too. It's scary and it's suffocating and it's not something people want to talk about much. I think it scares us all. We want to think that we can control our emotions, that we will always be able to keep the darkness at bay. But I think there are times in our lives when we just sit in it. We sit and suffer and hang on for dear life. We just wait.

My days got better. I'm glad that yours have too. And I hope to always remember your message if the darkness comes back again: It will get better. It is literally a life-saving phrase. All the love in my whole heart for you, dear Katie. I can't wait until I can hug you again. Please don't be embarrassed if I cry.