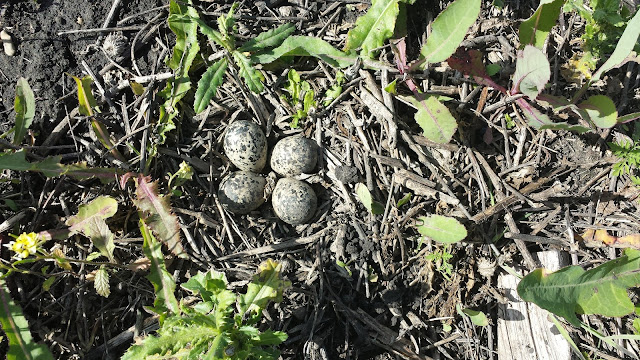 Several weeks ago now we started seeing a killdeer acting protective of a nest whenever we would go into the backyard. She would hobble as if she had a broken wing in an effort to draw us (and any other potential threat) away from her precious nest. For the longest time we searched for the well hidden nest until one happy day we found it! I was incredibly excited as I explained to Charlie that if we didn't touch it and were very careful of where we walked, the eggs would hatch and we would see the baby birds. He was excited and very interested to see how baby birds could come out of these seemingly drab little eggs. 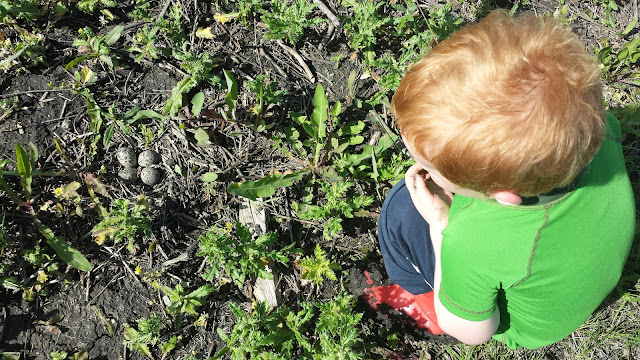 Over the course of the next two weeks we would check on the nest, often at Charlie's prodding. I was becoming very protective of "our" nest that lay dangerously close to the construction zone near by. I once anxiously watched out the window as a bulldozer came incredibly close to the nest. If it made one more pass it would have destroyed the little hidden nest and I was ready to run out and inform the driver if it did. Thankfully it did not. Keith carefully went around it each time he mowed the grass and I continued to watch from our window multiple times a day with my binoculars. Through them we could see the little momma killdeer sitting on her nest without disturbing her. Without even realizing it I grew very protective of that little nest and glanced out the window every time I passed it. Although the looming danger of the construction crews was always present, the nest continued to be just outside it's boundary.

Until one day when I looked out the window to see a few survey workers standing very near to our nest.

They saw the momma desperately trying to lure them away but her broken wing act just confused them as they looked on. I started my way out the door to explain to them what she was doing and to ask them to be careful. Charlie followed me out the door. 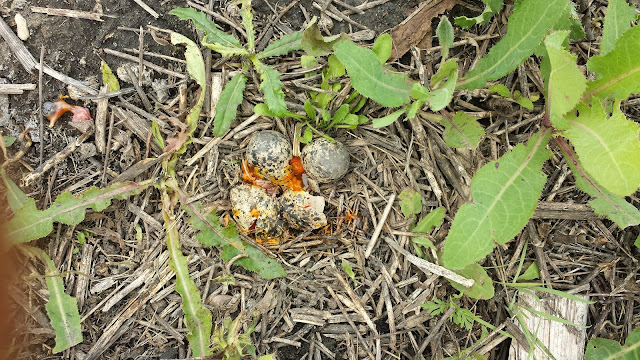 But we were too late.

One of the workers hadn't seen the well concealed nest and stepped on it, crushing the eggs. They continued along their way completely unaware of the tragedy that they left behind. I took a look and then turned and walked inside with the thought that perhaps the momma would not abandon the lone egg that was left. As a lump grew in my throat Charlie said to me: "it's okay mommy, she still has one baby left." Sweet boy.

The poor mother bird came back to the nest. When she saw what had happened she flew a short distance away onto our lawn and began crying as she walked back and forth, only occasionally returning to the nest. I had never heard the sad sound she made before as she walked back and forth. It wasn't the usual song of the killdeer and it wasn't the call they make as they try to lure some thing away from their nest. The only way I could describe it was a cry and it went on for well over an hour. I became completely preoccupied by the tragic scene that was unfolding outside my window. As she cried, I admit, I did too. I couldn't help it. After a while she seemed to pull herself together a bit and started to clean up the nest, picking up pieces of crushed egg and flying off with them. 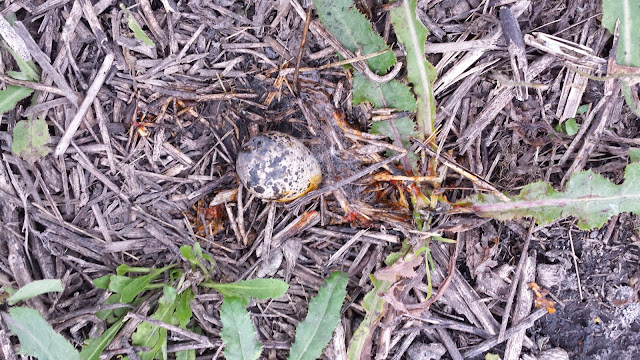 When she stopped cleaning I went back out to check on the nest again. She had cleaned it up well and left the lone egg. I took hope that she would not abandon it.

The rest of the day I watched through my binoculars to see if she would come back. She didn't. I watched again the next day. There was no sign of her. I couldn't understand why she would take such great care to clean up the nest just to abandon it, so I kept on watching.

She never came back.

At first I told myself that it was silly to get so emotional about a bird that wasn't even mine. "Pull yourself together" I told myself, "this is ridiculous." "You have adopted her and her nest," Keith gently told me shortly after wards. "That is why you care so much. And I love that you care so much for all the critters." I realized that I wouldn't have found so much delight in the whole experience of watching the mother's nesting and protection habits, nor gotten so giddy with anticipation as I waited for the eggs to hatch, had I not let myself get emotionally tied up in it all.

Sometimes the joy that comes from letting yourself get wrapped up in an experience is worth the risk of a potential tragedy. Looking back, I wouldn't change a thing. (Except for getting out there too late to save the eggs...)
Posted by Katie at 9:08 PM

Oh so sorry!!! That is very sad! That's what you get for having a loving heart and yes, it's worth it!!