A Fun Filled Visit from Amma

In early March Keith had to go to Chile for a week. Poor guy. He did his best to convince me that it wasn't going to be all that great, but I would have switched him places anyway, given the chance. Flying in a plane all by myself to a warmer country, staying in a hotel where breakfast is ready for you each morning, going out to eat each night, and getting to spend two days at the beach and hiking in the mountains (even if I had to work the other 5 days), sounded lovely. Absolutely lovely.

However, Amma came to stay with us for two weeks, so even though it was still winter in Fargo, we had a good time.

Her first Saturday here the weather was actually nice enough for a trip to the zoo. Yes, there is a zoo in Fargo. No, it is not very big. Yes, they can only have cold hardy animals, like Bactrian Camels who are from frigid Mongolia. But it is the perfect size for kids. Not too big and not so small that they get bored. 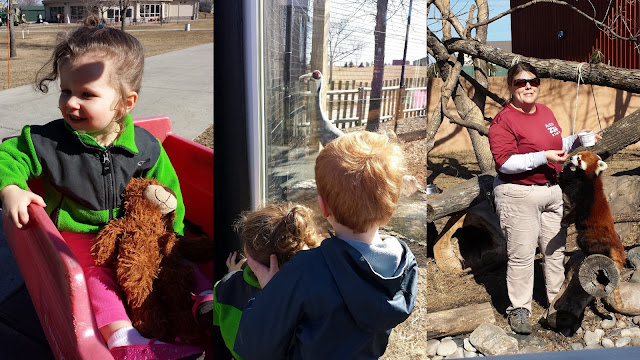 I like the middle picture where Charlie is man-handling Jane's head in an effort to help her see the crane.


That first weekend, Charlie also got his turn to take Ted E. Bear, the preschool bear, home. He was super stoked. Along with Ted E. came his journal, or rather the journal that the parents of the chosen child has to fill out with stories of his weekend adventures including pictures. Don't forget the pictures. No pressure Mom and Dad. Luckily for us, since Amma was here, we already had big plans for the weekend.

Right off the bat Ted E. proved to be quite helpful. Charlie had to have a blood draw shortly after school that day. He had had one less than two weeks prior and it was an absolute NIGHTMARE. This time Ted E. came along to help Charlie be brave and between he, and Amma's relaxation breathing she taught Charlie, it went off without a hitch. Nice work Ted and Amma. After the blood draw Keith took Charlie and Ted E. to Charlie's absolute favorite restaurant in town: Space Aliens. Imagine the restaurant in Toy Story, where Sid gets the little alien squeaky toy, but cooler.

Ted E. also accompanied us to Courts Plus (more on that shortly) on Friday and to the zoo Saturday. On Monday Mr. Ted came in handy once again at the dentist. Charlie loved his first dentist visit but has grown less and less excited over time. Once again he showed Ted E. how brave he could be. It really was a good weekend for a visit from Ted E. Bear. 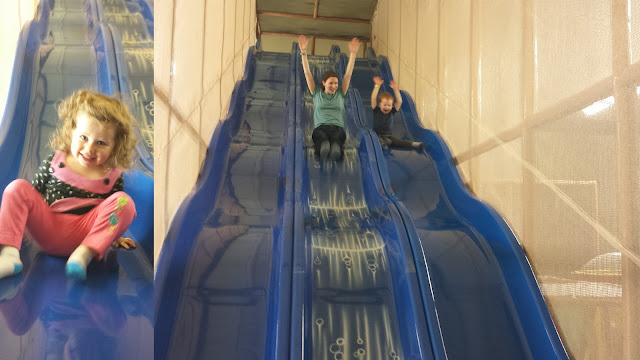 Courts Plus is technically a gym but I have never been past the front desk. We pay $1 per person at the desk and take a left to the doors that open to a three-story playground on steroids. It is a great place to play hide and seek and to tap into that inner-child again. Among the many features in it are two slides. There is a super fast pipe slide and if you climb to the very top level there is this big three-lane slide. Make sure to wear slick pants if you go. I didn't the first time and was completely bummed that Charlie consistently beat me on the slide races. 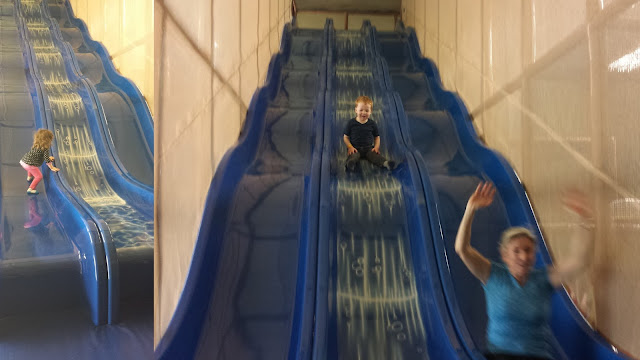 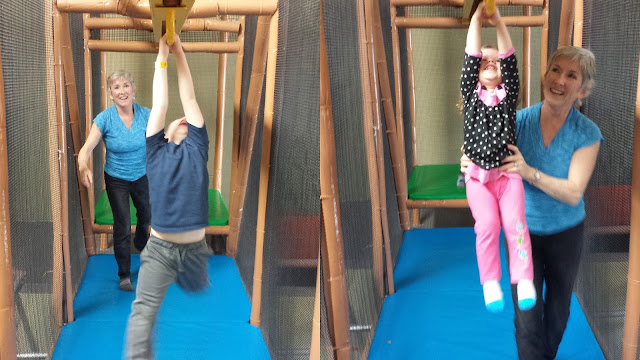 I am not sure what the technical term for this things is but it is basically one of those handle slide things that you jump onto and it carries you off to the other side. Charlie was imagining that we were all swinging over a river filled with alligators and he kept on shouting for Amma to get out of the water! 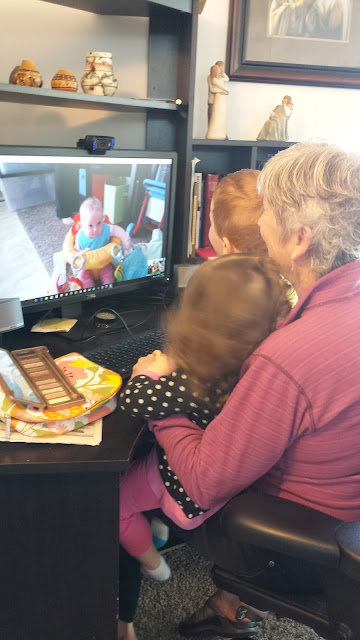 Unfortunately Mom can't be with the grandkids as much as she would like. That is why we love skype. I think it is great that whenever we do get together with family, our kids don't have a long adjustment period while they remember who each person is. Picture books and phone calls help but interacting through live video is as good as it gets with out in-person interaction. While Mom was visiting us we could skype Sarah and Darren's little family in Utah! 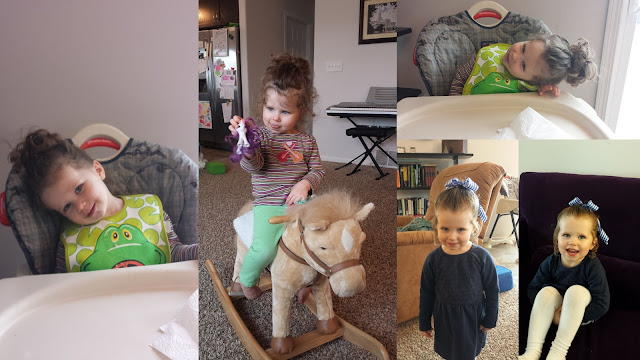 Jane had her personal stylist back. Before we even had breakfast the first morning she was here, Mom was saying how she could hardly wait to get her hands on this hair as she moved her fingers through Jane's tangled curls. Jane was surprisingly willing to have Amma do her hair each day. I only wish I had gotten a better picture of the pigtails. At church the first Sunday a friend stopped me in the hall and asked if it was nice to have my mom here. I was a bit confused because I was almost certain that she hadn't seen my mom yet and I hadn't told many people that she was coming. When I asked her how she knew, she said that she had seen Jane in nursery and noticed how nice her hair looked. That should give you a pretty good idea of how well I do at managing her hair if people know my mom is here simply by noticing how Jane's hair looks.

It was really nice to have Amma here. Charlie loved showing her gymnastics and preschool. Jane loved the attention she got when tagging along on the little errands while Charlie was at school. I enjoyed the talks, night time movies, and just not feeling the same isolation that accompanies Keith's work trips. Between not driving and not getting out much with the kids in the winter, the days can be extra long when he is gone.

Thanks for the visit Amma! We love you. See you in St. Louis in the fall! (the zoo there is much better ;) )

Thanks for the memories, sure loved spending the time with you!!!

Haha I love Charlie's imagination - wanting to get Amma out of the water. :)
You're all so cute!