Spring has sprung and it brought with it some special deliveries to our house! 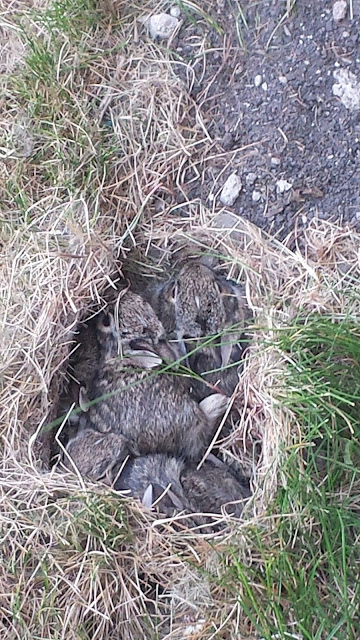 One day, when walking out the door on his way to work, Keith noticed something move in the grass. It was a little nest of bunnies! Yes, cottontails have a reputation of being pesky garden-eaters around here, but these were sweet, cute, soft, precious wee little babies!

Later that day we hosted playgroup. My fears came true when the bunnies got spooked by all the people going in and out of the house and scattered. Being so small and mostly blind, they couldn't get far. So after everyone left the kids and I went and gathered them back up and tucked all seven of them back in their cozy hole. During this I noticed that two of them were smaller and weaker then the others. They didn't try to hop away at all when I went to pick them up and were shivering more than the other five.

Our neighbor, who had noticed them as well, came home just as we finished gathering them back up. He reasoned that because we hadn't noticed their mother around, and because they were pests (a point that he gently brought up several times) it would be best if he took them away. He said that he had a friend who had a rabbit cage and could care for them until they were older and release them somewhere far away. He told us he would take a few pictures of them to show us. I had a hunch that maybe the mother came at night when it was safer but I wasn't sure so I reluctantly agreed.

As soon as he went into his house to get a box, I looked at Charlie and knew that we couldn't let him take the bunnies. At least not all of them.

I knocked on his door and explained that Charlie really wanted to keep a couple. I admit that I wasn't entirely truthful with him. The whole truth was that, although Charlie had voiced some sadness with the plan, he seemed more okay with it than I was. I desperately wanted to keep those babies and watch them grow. Besides, I had my doubts about our neighbors intentions. I explained to the neighbor that two of them were smaller and weaker than the others and we would like to at least keep those. He agreed.

Charlie and I got a box with some towels and brought them inside. I got on the computer and looked up info about baby cottontails. I learned three things: first, I confirmed that they were in fact cottontails (not the much bigger jackrabbits), secondly, the mother does come at night, and third, all seven, and especially the little ones that we had, were too young to survive without their mother. 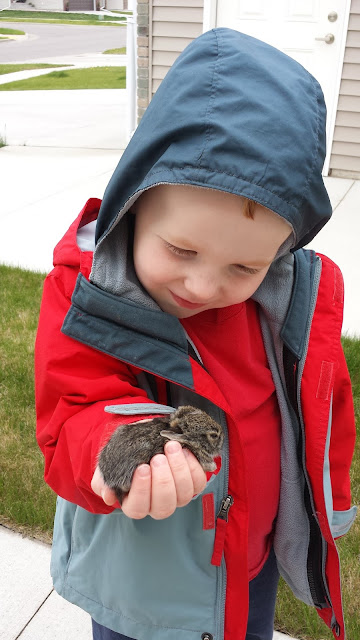 After a moment of panic, I realized that there wasn't anything to be done about the five the neighbor took. At least we had saved two. Maybe the other five would make it? I haven't had the guts to ask. 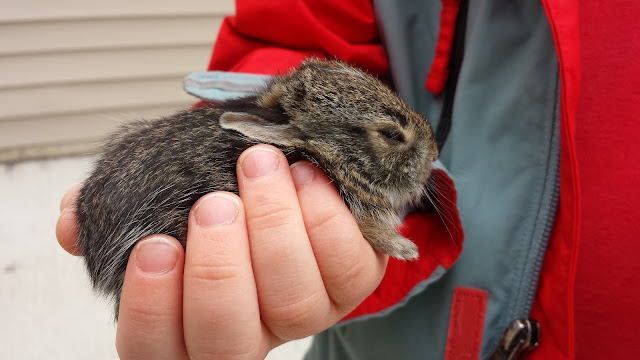 Jane was cautiously excited about them. She didn't want to hold them but giggled with delight when she got close to them. Charlie didn't want to ever put them down. I totally understood that. However, they would need to go back into the nest. I quickly realized that the nest, which fit seven, would be too big to keep these two little ones warm, especially since the nights were barely above freezing. Charlie and I tore apart cotton balls to pack the nest with and then covered the cotton balls with dry grass and bits of the mother's fur to help camouflage it. 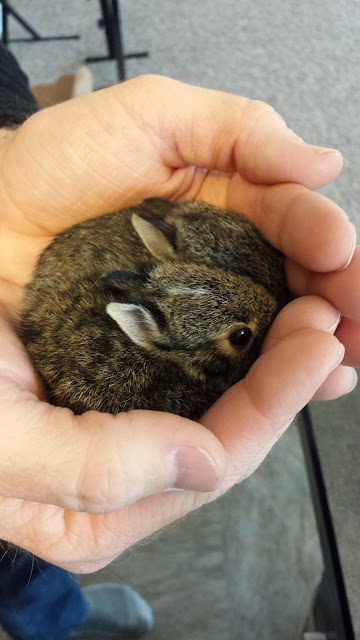 Keith and I kept watch that evening for the momma and she came right after dusk. My mother heart felt bad for her when I thought of her returning to find five of her little ones gone.

The next morning they were alive and well. I checked the weather forecast for that night and saw that there was a freeze warning with a chance of precipitation. I panicked. We had filled the nest with cotton balls. Every backpacker knows that "cotton kills!" I needed wool.

Keith came home to me cutting up a wool sock to replace the cotton balls. I explained the mistake I had made and he just shook his head and smiled. Like the killdeer incident of last year, I had adopted these bunnies.

We watched the mother come back that evening and first thing in the morning I went and made sure they had made it through okay. They had. :)

And so that is how things continued for several days. Watching for the mother to come each night and checking on them in the morning. They quickly grew until they were feisty little guys that no longer would patiently sit in our hands. Charlie was really sad about that. 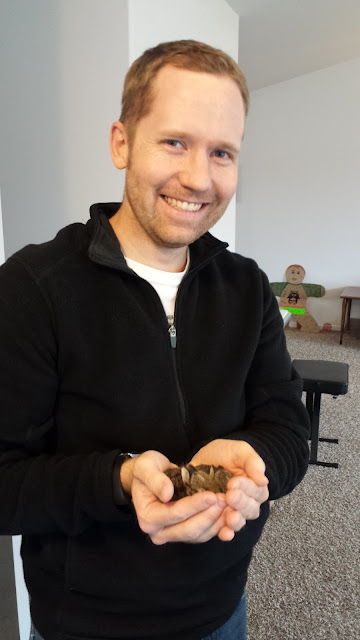 Then one morning they were gone. They were still too small to survive without their mother, so I was a bit concerned. The nest didn't seem disturbed though so I figured nothing tragic had happened to them over night. The next day I found bits of wool sock on the driveway and around to the back of the house. I assumed the mother had realized that the current location of the nest was no longer safe and had relocated her two remaining babies once they were able to follow her.

My assumption was confirmed when the kids found a little bunny in the tall grass of the backyard. It was the same size as "our" bunnies would have been. My heart was at ease. 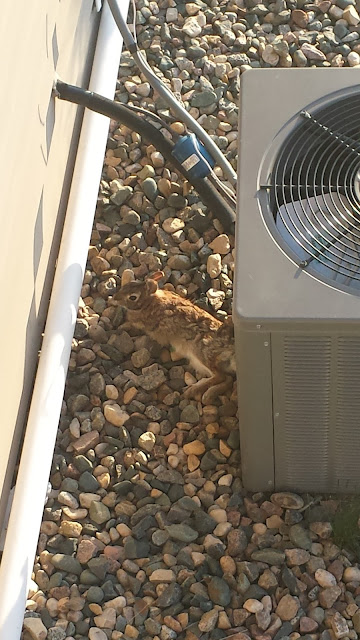 As a bonus, about a week later when we were roasting marshmallows out on the deck, Charlie noticed a juvenile relaxing between the house and the AC unit. It was far to big to be one of "ours" but it was fun to think that bunnies felt welcome here.

Even if they are considered pests.
Posted by Katie at 10:38 PM

What a sweet experience! Tks for sharing! I love you all!