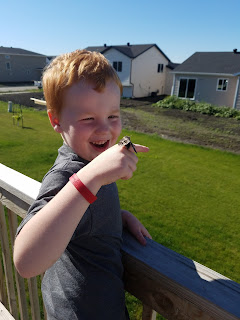 This guys is 6 already! Can you believe it!?!

For his birthday we went on a Mother-son date to the movie theater. He has always wanted to go! We saw Moana. The movie was fun (spoiler: there is a lava monster that freaked him out a bit) but I think he was a bit underwhelmed by the experience as a whole. Yeah, the screen was huge but he found the chairs uncomfortable and the rest of the place kind of boring. Apparently he had thought it would be cooler in his imagination.

He is totally into bugs, tools, dinosaurs and, most recently, space. He reads up a storm and is always wanting to share what he is reading about with Jane which she finds either neat or annoying depending on what she is doing at the time. He is at that age where he loves jokes but his "jokes" don't have funny punch-lines to anyone but him and Jane. The jokes may not be funny, but the way he gets a kick out of them sure is! I absolutely love his spontaneous hugs and declarations that he is so happy that we are a family. He really is a great little man and I am so blessed to be his mom!
Posted by Katie at 9:14 PM